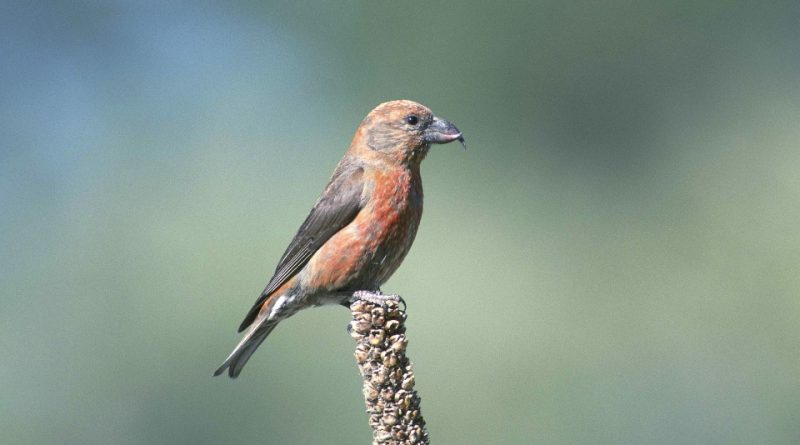 The common spider (Loxia curvirostra Linnaeus, 1758) is a bird belonging to the Fringillidae family.

Geographic Distribution and Habitat –
The common cruiser is a species that, through its subspecies, is distributed in the Olarctic ecozone, that is, in the biogeographical region that includes most of the northern hemisphere, with the exception of tropical regions.
The range includes a large portion of North America (from southern Alaska to Mexico through the Pacific Coast Range, and east to New England) and Eurasia (from the Scandinavian Peninsula to North Africa east to Manchuria and Japan, and from here as far south as Vietnam and the Philippines).
In Italy this species is sedentary between 1000 and 2200 m of altitude throughout the Alps and in most of the Pre-Alps, while along the Apennines it is present but less common and in the south and in the islands the species is accidental, with specimens coming from North Africa or Spain.
The habitat of the species is represented by pine forests with a temperate climate, in the plains in the colder areas (where it colonizes the taiga) and in the hilly or mountainous areas of the warmer climate areas. The individual specimens, depending on the size and conformation of the beak, tend to colonize pine forests with a predominance of different species: for example, the specimens with a more massive beak populate the woods with a prevalence of species with large pine cones, such as Engelmann’s spruce and the Ponderosa pine in the Pacific States and black spruce in the northeast, while the specimens with a thinner bill are associated with trees with smaller pine cones such as tsuga and pseudotsuga. 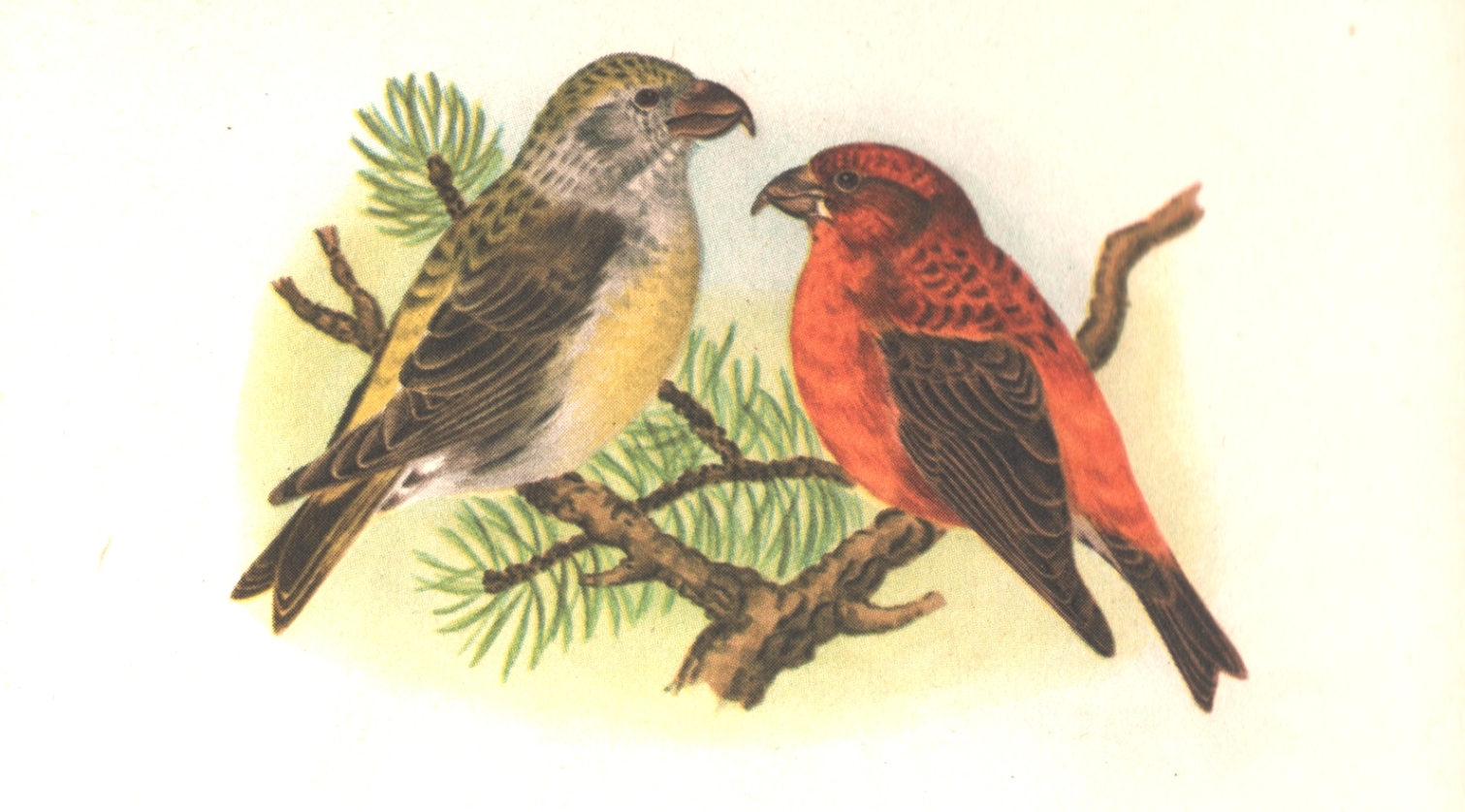 Description –
The common cruiser is a bird of 14-23 centimeters in length, weighing 23-43 grams, even if the populations of the warm areas frequently reach smaller dimensions than those of the cold areas.
The species has a robust and massive appearance, with a large and elongated head, pointed wings and swallowtail. The beak is unmistakable, with crossed tips: the frequency with which the jaw is inclined to the right and the jaw to the left and vice versa is about 1: 1; to date the processes underlying the beak crossing direction are unknown. Among other things, the beak at hatching is straight, and only between two and four weeks of life does it begin to assume the characteristic curvature.
The plumage has a certain intraspecific variability, even if sexual dichromatism is always present:
– in males, it manifests itself with a head, back, chest and belly of a color ranging from orange to brick red (generally darker on the back and more lively on the rump), with widespread gray shades on the sides and face (area between the sides of beak and ears), white undertail and blackish wings and tail.
– in females, the red color is replaced by a color ranging from brown-greyish to green-yellowish, generally brighter on the rump and on the rump.
It has been found that, in general, the extent and intensity of body coloration are directly related to the presence of anthocyanins in the diet, although with differences also at the level of populations.
The beak, in both sexes, is blackish, the legs are flesh-colored-black and the eyes are dark brown.
The call of this bird is similar and clearly distinguishable for each subspecies. The song is low, sweet and peeping and is emitted by the specimens that are feeding, while those in flight are generally silent: any other groups present in the vicinity or passing by, upon hearing the calls, approach and join the banquet. Furthermore, the type of call is closely related to the conformation of the beak and therefore consequently to the type of tree used to draw nourishment: therefore, only specimens with comparable beak size will be receptive to calls, while the others (also belonging to the same subspecies, but with differently shaped beak) will ignore it.

Biology –
The reproduction period of this species can take place throughout the year even if it prefers the months between January and May, when the availability of food is optimal. Furthermore, these are monogamous birds in which the couples are very close and remain together even outside the reproductive period, exchanging mutual attentions from time to time.
In general, this species is known for the precocity of its reproduction, which already begins towards the end of winter, compared to almost all the other finches, which instead reproduce in the spring period.
The common cruiser, in conditions of optimal availability of food, can carry four or more broods.
The nest is built by the female and is made with feathers, heather, straw and broom, as well as animal hair, in the upper part of a conifer (which can usually be a spruce), between 2 and 20 m height.
The female lays two to five eggs (usually three), which have a whitish color and brown spots.
The hatching lasts from 14 to 16 days.
In turn, the male, during the nest building and hatching operations, procures food for the female, feeding her, besides remaining on guard near the nest: sometimes, it can supply the female with part of the building material of the nest.
At the hatching the pullets are blind and naked and are fed and cared for by both parents, who alternate between the nest and the search for food.
Towards the two weeks of life the young are ready for the fledging even if they tend to remain near the nest for 2-3 weeks before abandoning it definitively, asking more and more sporadically for the cue from the parents; these, if the availability of food allows it, carry on a second brood.
In general, the life expectancy in captivity is about 8 years, while in the wild these birds hardly live more than three years.

Ecological Role –
The common spider is a passerine bird, which tends to be sedentary. Especially the young in dispersion usually make movements even of a certain extent: in periods when food is scarce, moreover, large groups of these birds migrate to new environments, sometimes colonizing them successfully and becoming residents, as happened for example in the British Isles. .
They are, moreover, birds with essentially diurnal habits, which spend the day looking for food among the trees and at dusk they return to sheltered perches to spend the night.
It is a mild and discreet species which, despite the colors and the shape, are not very easy to observe in nature, as, at the slightest noise or disturbance, they tend to take refuge in the thick of the vegetation. Moreover, apart from the mating season, they gather in small flocks, often in association with other species of cruises, within which the couples are however well recognizable, always very united.
The common cruiser has a diet composed almost exclusively of pine nuts: to cope with this diet, the cruiser is perfectly equipped thanks to the unmistakable crossed beak, which is inserted between the scales of the pine cones and opened to spread them just enough to be able to insert inside the tongue and extract the pine nut, which is then expertly shelled always using the beak and tongue (sometimes with the help of a paw or by inserting a pine cone or pine nut in a crevice of the bark to be able to handle them more easily, although the cruises rarely obtain food from fallen pine cones).
Characteristic is often the position of these birds which, during the search for food and feeding, hang upside down among the branches, very reminiscent of parrots, which also happens during the handling of the seeds by means of their beak, tongue and legs.
Furthermore, there is a fairly unique correlation between the species of conifer visited and the subspecies in question, with populations of the western Mediterranean preferring the Aleppo pine, those of the eastern Mediterranean and Corsica more focused on black pine, those of Europe. plants related to Scots pine, those of the Balkans with Bosnian pine, those of South-East Asia with khasi pine, those of the Far East with Asian spruce and tsuga plants, as well as those of eastern North America, while those of western North America prefer Douglas fir and yellow pine.
In addition to seeds, they supplement their diet by feeding on shoots and young pine cones of conifers; they also supplement their diet with small insects, caught especially during the reproductive period, when the energy requirements of adults and chicks have increased.
Finally, in the Alpine areas, it is possible to observe specimens of these birds clinging to the walls of the huts, to feed in part on the salts that exude from the interstices.
In Italy the area of ​​the population is quite vast (greater than 20,000 km², Boitani et al. 2002). The number of mature individuals is estimated at 60,000-120000 and is overall stable (BirdLife International 2004), despite the fluctuation of most populations due to temporary colonization that occurs irregularly in suitable habitats (coniferous woods) even outside from the regularly occupied mountain range. However, this fluctuation cannot be considered extreme (sensu IUCN). Furthermore, although the population estimate is not based on quantitative data, the species in Italy does not seem to reach the conditions to be classified within one of the threat categories (population decline of 30% in three generations, reduced number of mature individuals, range restricted) and is therefore classified as Less Concern (LC).