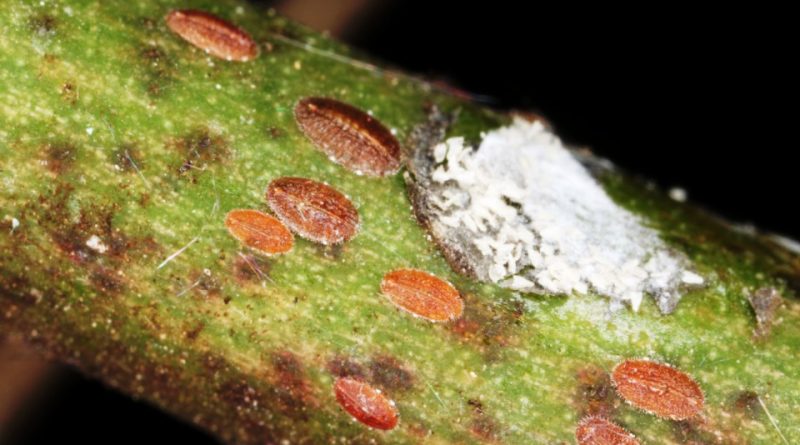 The Dogwood Cochineal (Eulecanium corni Bouchè) is a homopterous insect belonging to the Coccidae family.

Geographic Distribution and Habitat –
The Dogwood Cochineal is an insect that lives in temperate areas where host plants grow such as: Kaki, Vine, Plum, Prunus Spp., Ribes, Elm, Robinia, ornamental and herbaceous plants (Soy, Beetroot).
In Italy, the Corniolo Cochineal is a more common species in the northern and eastern regions of the peninsula.

Morphology –
The adult female of this cochineal, about 4-7 mm long, has an oval and strongly convex body, crossed by brownish furrows.
The male, which appears rarely, is about 2 mm long and originates from an elongated and whitish follicle; it has wings and is yellowish in color.
The larval forms are very difficult to distinguish as they can be confused with those of the cochineal Eulecanium persicae.
The distinction between the two species is made starting from the adult forms.

Attitude and Life Cycle –
The Cocciniglia del Corniolo spends the winter as a 2nd age nymph. The development of the nymph is completed in spring.
The females, which generally reproduce by parthenogenesis, lay from some hundreds to some thousands of eggs (1500-2000), under their own body. Unfertilized females produce other females and females only. The duration of the incubation ranges from 15 to 30 days.
The female accumulates her eggs and then expels them, in several days, between the end of May and July. It later dies and its carcass protects the eggs throughout their embryonic development. Males become adults when females undergo the second moult.
Oviposition occurs between spring and early summer. The nymphs come out after about 2-4 weeks (first generation). The first larval moult takes place in August.
In suitable climatic conditions, this generation can be followed by a second one, in late summer (September); the nymphs, in the autumn period, leave the leaves and migrate on the branches, where they overwinter between the cracks in the bark.
The Cocciniglia del Corniolo thus completes 1-2 generations a year.
Attacked plants bloom badly, fruits remain small; intense smokiness often develops in fruit trees.
The young larvae settle on the lower layer of the leaf, mainly along the ribs, and can be carried by the wind over great distances.
Subsequently the larvae then migrate towards the roots, the branches, and the trunk to spend the winter here. They become adults in April and migrate to young branches, shoots, and young leaves.

Ecological Role –
The Cocciniglia del Corniolo infests mainly the lower page of the leaves, arranging itself along the ribs and the peduncles of the fruit; in winter it is localized on the branches. The damage occurs on the leaves and on the fruit peduncles and is caused by trophic stings and the production of honeydew; the affected plant manifests general decay both for the subtraction of sap and for the slowing down of the gaseous exchanges, due to the honeydew and the fumaggini that encrust the vegetation. Its presence can facilitate entry to the Scolitidae.
The eighth against this cochineal must take into account that this insect is controlled by some Coccinellidi and by several Chalcidoid Hymenoptera.
Furthermore, to avoid massive infestations, it is necessary to avoid the creation of excessively specialized crops, the presence of interruption hedges of the various plots, pruning techniques that help the aeration of the plants, not too dense sixths and the limitation of fertilizations with nitrogen especially of nitric origin.
The chemical fight must therefore be carried out only in case of strong infestations; in these cases interventions are carried out at the fall of the leaves, to combat the wintering nymphs, with white oils activated with natural Pyrethroids and / or Marseille soap.
The interventions can be repeated in spring and summer, during the moment of exit of the nymphs from the maternal follicle.