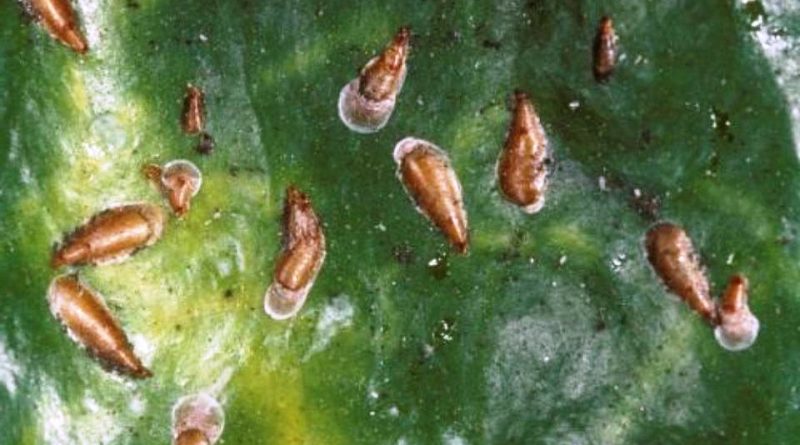 The Purple scale (Lepidosaphes beckii Newman, 1869) is a homopterous insect belonging
to the Diaspididae family.

Geographic Distribution and Habitat –
Lepidosaphes beckii owes its specific name to the historian, literary, writer and poet Richard Beck (9 June 1897 – 20 July 1980).
This cochineal is found mainly on citrus plants, such as lemon or sweet orange.
Small insects attach themselves to leaves, fruits and small branches causing injuries as they steal tree sap.
Lepidosaphes beckii is a widespread species everywhere, especially in coastal areas.

Morphology –
The first description of this insect is due to the English entomologist Edward Newman from a fruit imported to Great Britain.
The female of the adult comma mealybug is up to three to 4 millimeters long.
The female follicle is curved, hence the name, gray-brown in color; the exuvia, placed at the more pointed end, is reddish-brown in color.
Males are winged.
Male follicles appear similar to female ones, but are smaller in size. The nymphs are whitish in color.

Attitude and Life Cycle –
Lepidosaphes beckii winters in the various stages of development even if it often does so as a mature female.
The females begin to lay eggs as early as February, about 50 eggs each.
The cycle continues throughout the year with a period of diapause in the hottest environments. The Comma Cochineal generally completes 3-4 generations per year.
Infests the foliage in the parts where the humidity stagnates most and those in the shade; it is localized on the branches, on the leaves and on the fruits.

Ecological Role –
In the presence of massive attacks of Lepidosaphes beckii, damage may occur on citrus plants which manifest themselves with leaf yellowing, early phylloptosis and, at times, with drying of the branches; the attacks on the fruit are serious and cause a strong depreciation of the product.
The fight against massive infestations is carried out with agronomic interventions that consist of pruning practices that thin out the foliage, aerating them; a balanced fertilization, without excess nitrogen, especially in the nitric form, which by increasing the tenderness of the tissues increases the palatability of this cochineal.
Preventing the agronomic fight, however, it is necessary to implement planting techniques that avoid excessive specialization, too narrow sixths and the introduction into plots of sites, such as hedges or other shelters, where natural antagonists can reproduce.
In nature this cochineal is in fact preyed on by some insects, such as some small wasps of the Aphelinidae, Encyrtidae and Signiphoridae families:
– Among the Aphelinidae we remember: Aphytis chrysomphali, Aphytis diaspidis, Aphytis holoxanthus, Aphytis lepidosaphes, Aphytis mytilaspidis, Encarsia citrina, Encarsia lounsburyi, Eretmocerus corni and Pteroptrix chinensis;
– Among the Encyrtidae: Adelencyrtus inglisiae, Metaphycus flavus and Ooencyrtus sp .;
– Among the Signiphoridae: Signiphora flavopalliata and Signiphora merceti.
At one time, and in some cases still today, the chemical fight was carried out which was generally carried out in the winter period with treatments based on white oil or white oil activated with phosphorganics. In some cases treatments were practiced in the summer, to prevent infestations on the fruits.
Currently, in addition to the aforementioned containment criteria, chemical interventions are avoided as they damage the entomofauna, especially of pollinators and antagonists.
It is also useful, in cases of excessive infestation, over 5% of the attacked fruits, to intervene with white oils but additives with natural-based products, such as Marseille soap and intermediate washing with water and Marseille soap.