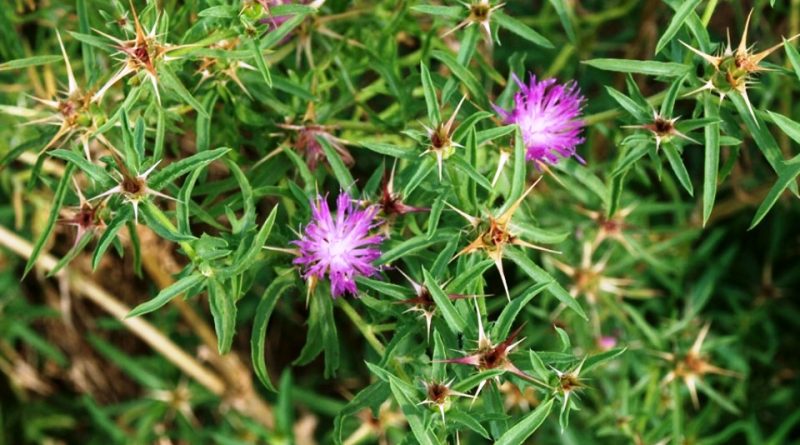 The Red Star-thistle (Centaurea calcitrapa L., 1753) is a perennial herbaceous species belonging to the Asteraceae family.

Etymology –
The term Centaurea is assonant with the Greek κέντρον céntron goad, spur: due to the shape of the bud, or from Centaurus, Greek κένταυρος céntauros centaur, mythological figure half man and half horse; according to some authors, this genre would be dedicated to Chiron who, unlike the other centaurs, had a wise and meek disposition: an expert in science and medicine, he was considered a teacher of Aesculapius, Achilles and other heroes
The specific calcitrapa epithet comes from calx calcis calcagna and trap trap, probably due to the long thorns of the flower head that can injure the legs or feet of those who step on the plant.

Geographic Distribution and Habitat –
The Red Star-thistler, or calcatreppola cornflower, is a species with a Euro-Mediterranean distribution present in almost all regions of Italy (missing in Valle d’Aosta and Trentino-Alto Adige and has not been found for a long time in Piedmont), but more common in the central-southern regions, while in the northern ones it is perhaps of ancient introduction in cereal crops.
On the other European reliefs it is found in the Massif Central, the Pyrenees, the Balkan Mountains and the Carpathians.
In addition to Europe, this species is present in northern Africa, in Asia (India and China); while in America and Australia it is considered a naturalized species.
Its habitat is that of disturbed sites such as the edges of roads and paths, playgrounds, ruderal environments, on arid primitive soils, and is exposed to a certain risk due to stationary changes caused by man. The altitudinal distribution is on the reliefs where these plants can be found up to 1400 m s.l.m .; therefore they frequent the following vegetational levels: hilly and mountainous (in addition to the plain one – at sea level). 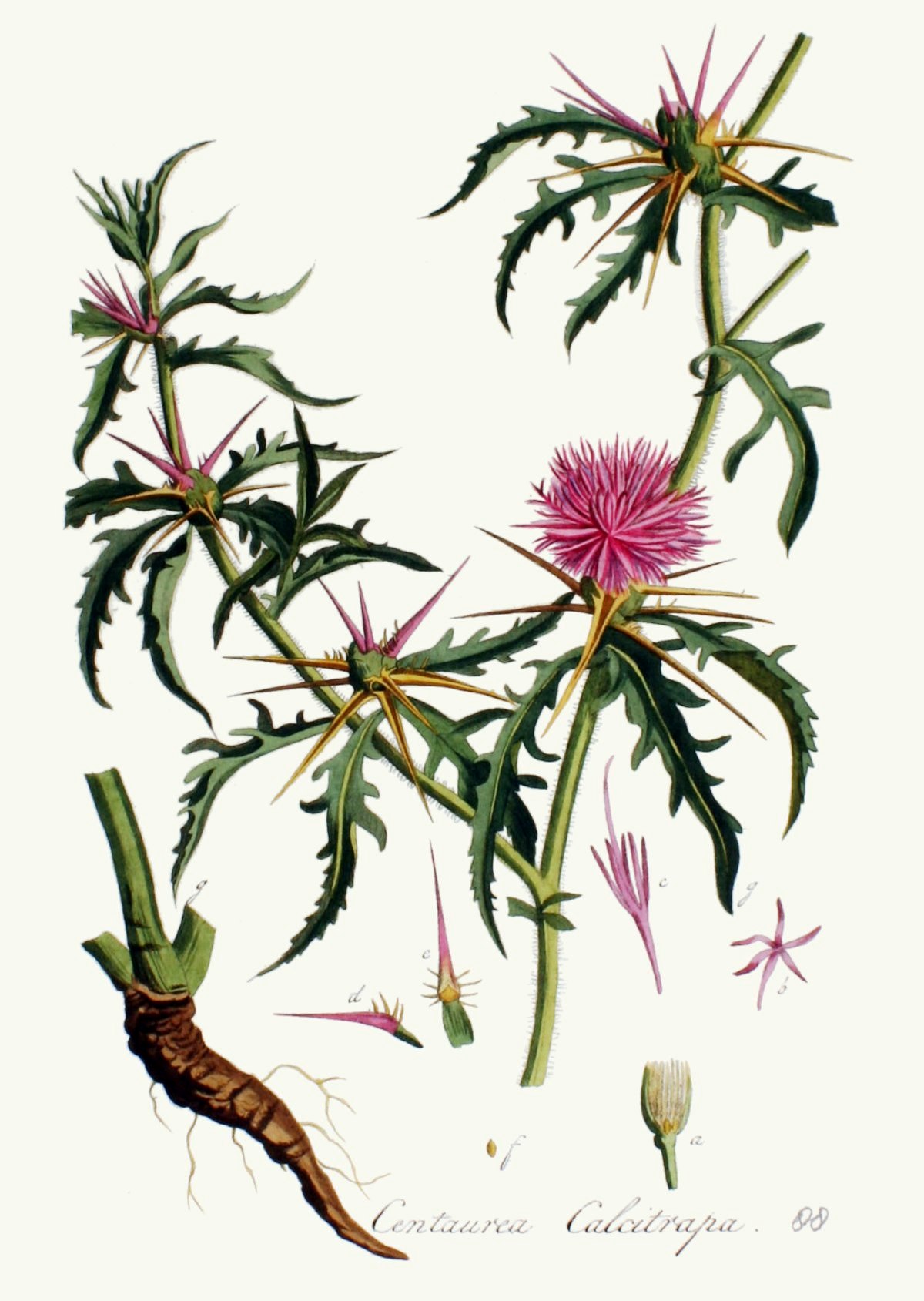 Description –
Centaurea calcitrapa is a biennial herbaceous plant, 15-50 cm tall, with prostrate-ascending stems with numerous spreading branches, cobweb or subglagre, rough, angular at the top.
The basal leaves are rosette, almost always disappeared at the moment of flowering, pinnatosette or pinnatopartite, petiolate, with linear segments of 1-2 x 18-25 mm, indented, subpungent or rough. The cauline leaves are alternate, sessile, pinnatifid or whole and linear, more or less serrated with thorny mucrons on the margins.
It has numerous flower heads, axillary or apical, sessile or briefly pedunculated and surrounded by linear floral leaves; pyriform envelope (5-10 mm Ø) with external glossy green scales, leathery, with a narrow scariose margin and bearing at the apex a long and robust median spine (14-25 mm), yellowish, very patent, accompanied at the base mostly by two pairs of spines shorter than 2-3 mm (spina pennata); the internal scales with truncated appendages without thorns.
The flowers are pinkish-purple (rarely white), all tubular, the peripheral sterile, radiant, the central hermaphrodite.
The fruit is a 2.5-3.5 mm cypsela, ± obpiriform or obovoid, glabrous, light brown with vertical ± intense brown streaks, without pappus.

Cultivation –
The Red Star-thistle is a plant that grows spontaneously and is pollinated by insects (entomogamous pollination).
After fertilization the seeds are formed which, falling to the ground (after being carried for a few meters by the wind thanks to the pappus if present – anemocora dissemination) are subsequently dispersed mainly by insects such as ants (myrmecoria dissemination).

Customs and Traditions –
The Red Star-thistle is a plant similar to the Centaurea iberica Spreng., Generally more robust plant with lyrate lower leaves, flower heads with larger casing (8-14 mm Ø) and achenes with pappus.
In some areas (especially in North America) the species is considered invasive. The large thorns of the casing make it unwelcome to grazing cattle, in this way the plants proliferate undisturbed creating vast and dense impenetrable populations.
The plant is known both for its food use and for phytotherapeutic use due to the benefits it brings to the liver, so much so that the pulverized seeds are added to water as a remedy against stones. The pulverized roots are also used for medicinal purposes.
According to popular medicine, the star cornflower has diuretic properties (facilitates the release of urine).
It is used for food purposes substantially like other species that go generically under the name of thistles, having a taste that vaguely recalls celery and artichoke.
Studies have shown that the aqueous extracts obtained from suspended cell cultures of Centaurea calcitrapa can be used as a proteolytic additive in the production of commercial bovine cheese.

Preparation Method –
Of this plant, especially in Sicily and Sardinia, the tender ribs of the leaves are used (and the same tender leaves of the head), in the same way as thistles and artichokes are used in the kitchen, starting with their dressing, after boiling, with oil and lemon.
In various Mediterranean regions the species is also used as a food-medicine due to its aperitif, diuretic and stomachic properties.
In Cyprus, the tender leaves of the head are also used in salads, while in Egypt the young raw shoots have been consumed since ancient times.