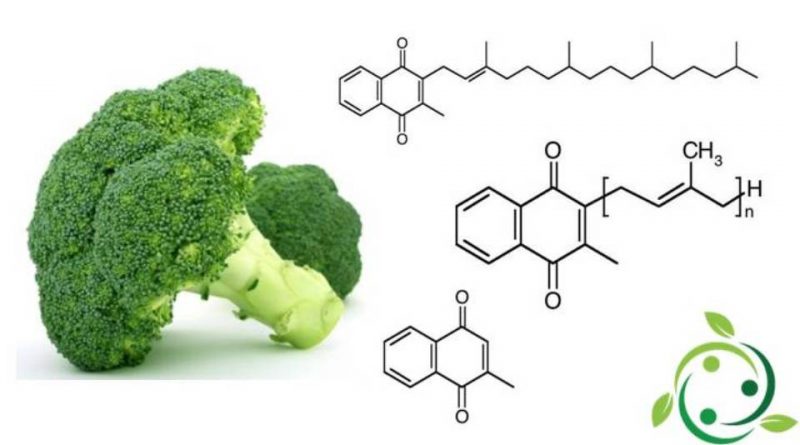 The term refers to a series of compounds that derive from 2-methyl-1,4-naphthoquinone.
The term vitamin K was attributed on the basis of the initial of the Danish word Koagulation vitamin, which was coined in 1935 by the Danish scientist Henrik Carl Peter Dam to indicate those compounds that in some way were able to reverse hemorrhagic pathologies that manifested animals subjected to a diet based on cereals and yeasts.
Subsequently this compound turned out to be essential in maintaining the levels of some coagulation factors, in particular because it intervenes in the synthesis of prothrombin and for this reason it is considered an anti-haemorrhagic vitamin. Later other derivatives with the same biological action were identified.
It was only in 1974 that the mechanism of vitamin K was discovered.
Vitamins K can be divided into three groups, named K1, K2 and K3:
– Vitamin K1 or phylloquinone (2-methyl-3-phytyl-1,4-naphthoquinone) of vegetable origin and which is the most present form in the diet;
– Vitamin K2 or menaquinone of bacterial origin, synthesized by symbiotic bacteria normally present in the human intestinal flora, such as those belonging to the genus Escherichia (such as E. coli); menaquinones differ in the number of isoprene units found in the lateral chain;
– Vitamin K3 or menadione, fat-soluble, of synthetic origin and its bisulfite derivative, water-soluble.
It is important to know that the different forms of vitamin K are absorbed in different parts of the intestine.
In general, vitamin K acts as a coenzyme of a carboxylase which determines carboxylation of glutamic acid residues to form the amino acid γ-carboxyglutamic acid (Gla). This causes some proteins to be made active:
– prothrombin (factor II) and blood coagulation factors VII, IX and X;
– plasma proteins C, M, S, Z;
– osteocalcin and matrix protein Gla at the bone level.
Vitamin K catalyzes the carboxylation in γ of the first 10 residues of glutamic acid present in the precursor of prothrombin starting from the N-terminal. The two carboxylic residues found in Gla, which in physiological conditions are ionized, are able to bind Ca2 +.
In this form they are able to form ionic bonds with the anionic groups present in the phospholipids of the membranes of traumatized platelets. Following a series of reactions, prothrombin will transform into thrombin, which in turn will transform fibrinogen, which is soluble in plasma, into fibrin which is insoluble. The fibrin will spontaneously organize to form a clot and stop bleeding from the wound.
The active form of vitamin K is hydroquinone (KH2), obtained from a reduction reaction catalyzed by a reductase dependent on NADPH and sulfhydryl groups. During the carboxylation reaction to generate Gla, hydroquinone is transformed into epoxide which, by an epoxide reductase, is converted back into vitamin K.

Vitamin K deficiency –
Vitamin K deficiency, given the presence and diffusion in food and its bacterial production, is unlikely to occur.
Vitamin K deficiency may occur in adults as a result of malabsorption or bile disorders. People with deep vein thrombosis and heart patients at risk of thrombus embolism are treated with vitamin K antagonists (warfarin or dicumarol) and follow this therapy for many months, if not for several years. They are categorized as most at risk of developing serious vitamin K deficiencies, unless they periodically introduce probiotics, such as lactobacilli, to implement the synthetic functions of the intestinal flora.
Vitamin K deficiency in infants, on the other hand, takes on more delicate aspects. This phenomenon can occur for the following reasons:
– vitamin K hardly passes through the placenta;
– breast milk does not have large levels of it;
– the liver produces an inadequate quantity of coagulation factors and the intestine, in the first days of life, is sterile.
The phenomenon of vitamin K deficiency manifests itself at the beginning with an increase in clotting time and a decrease in prothrombin, then with clinical signs ranging from petechiae to large hemorrhages. Given that vitamin K actively participates in the fixation of calcium in the bones through the proteins Gla and osteocalcin, in predisposed subjects its deficiency can even cause osteoporotic phenomena prior to coagulation disorders.

Excess of vitamin K –
Excess vitamin K is very rare in adults, but can cause flushing, thrombosis and anemia
Vitamin K is partly produced by the bacterial flora of the colon, partly ingested through food. Excess vitamin K can be found in newborns, when they are given too high a dose of supplements as soon as they are born, so it can lead to toxic situations and manifest the typical symptoms of jaundice. An excess of synthetic vitamin K causes, even in adults, anemia, vomiting, thrombosis and collapse of red blood cells; it can also cause hot flashes, sweating, itching, tightness in the chest. Vitamin K normally taken through food does not cause intoxication or particular symptoms.