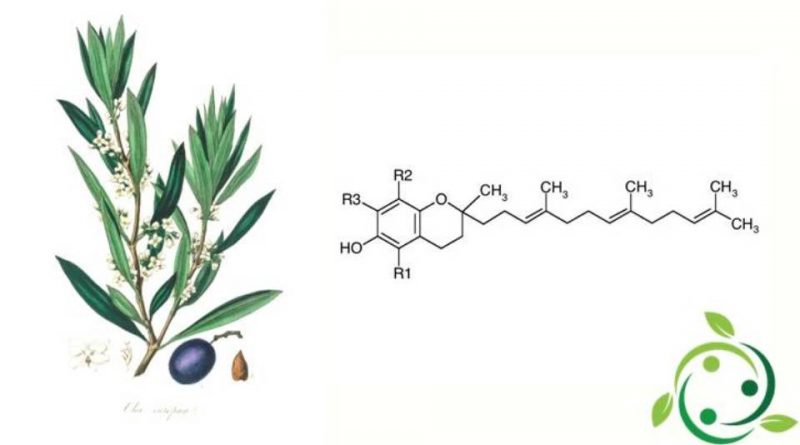 Tocopherol or, more precisely, tocopherols, together with tocotrienols, are fat-soluble elements that make up the vitamin E group. Among these compounds the most important is undoubtedly α-tocopherol (alpha-tocopherol), because of maximum biological activity – for this reason, especially in the nutritional field, we often improperly talk about tocopherol as if it were synonymous with vitamin E.
Tocopherols contribute above all to preventing the oxidation reactions of polyunsaturated lipids, thus acting as biological antioxidants, in a “metabolically” similar and / or complementary way to vitamin C (ascorbic acid, water-soluble).
For this reason they are essential vitamin nutrients for humans.
Vitamin E contains 8 types of molecules:
– tocotrienols (α, β, γ and δ, initially called vitamin T);
– tocopherols (α, β, γ and δ).
There are, in nature, eight compounds, derivatives of 6-chromanol with four methyl groups linked to the aromatic ring and with an isoprenoid side chain with 16 carbon atoms, saturated or unsaturated, in position 2, having a common chemical structure, having the biological activity of vitamin E.
Furthermore, according to the presence of a saturated or unsaturated chain, these compounds are divided into two groups: tocopherols (α, β, γ, δ) and tocotrienols (α, β, γ, δ). The latter, in fact, have three double bonds on the isoprenoid chain. The arrangement of the methyl groups makes it possible to distinguish the single compounds of the two classes.
From a biological point of view, alpha tocopherol is the most powerful and active vitamin form.
The other tocopherols, on the other hand, do not have much importance even if the oxidizing activity increases passing from alpha to delta, inversely to the vitamin activity.
Vitamin, in addition to the antioxidant function, which facilitates the maintenance of the health and good functioning of cell structures, the muscular system, the reproductive system and the heart system, also has an immunostimulating action, protecting the cell membrane from pathogens, and toned at the humoral level, facilitating the stability of mood. Lack of it can lead to developmental problems, anemia, susceptibility, and mood swings.
Tocopherol is present in foods such as: meat, cereals, dried fruit, wheat germ, milk, oils, olives, seeds, green leafy vegetables (a certain part is lost with cooking and / or slowly degraded with exposure to light).
The action of tocopherol is not limited to the metabolism of living organisms, but also extends to the reactions of substrates such as, for example, foods, supplements, drugs and cosmetics. In fact, tocopherols added to foods improve the storage and processing stability of products containing fats – for example oils – and are therefore added as an antioxidant additive.
Absorption of tocopherols occurs mainly in the medial part of the small intestine, by passive diffusion.
As with all fat-soluble vitamins, the absorption of tocopherol also requires an adequate emulsion and micellar solubilization. The esterified forms are probably hydrolyzed by an esterase of the duodenal mucosa and the alcoholic form thus obtained is absorbed.
Absorption of tocopherol can therefore occur only in the presence of bile salts and dietary fats.
The absorption efficiency varies from 20 to 60%, decreasing as the intake increases; which is why constant and moderate dietary intake is more effective than super-doses by means of food supplements.

Once absorbed, the tocopherols pass into the lymphatic circulation associated with the chylomicrons (45%); then they are concentrated in the remnants chylomicrons which release it to the liver (main storage organ). Within the hepatocytes they are incorporated into nascent VLDL (11%), from which it then passes to LDL (65%) and HDL (24%).
During intense physical exercise there is a significant increase in circulating levels of tocopherol (10 ÷ 20%), probably due to the mobilization of fatty acids during lipolysis for energy purposes.
Once in cells, tocopherols are concentrated especially in structures that contain membrane phospholipids, such as mitochondria, microsomes, and plasma membranes.

Vitamin E functions –
Among the most important functions of tocopherol we remember:
– tocopherol inhibits the oxidative stresses involved in aging, in the pathogenesis and complications of diabetes (cataracts and cardiovascular problems);
– tocopherol can exert protective effects against coronary heart disease. According to the antioxidant hypothesis, the main mechanism by which tocopherol carries out this protective action would be the inhibition of LDL oxidation;
– it can protect against carcinogenesis and tumor growth, through antioxidant properties and / or immunomodulatory functions, through the elimination of mutagens, superoxide radicals and / or nitrogen dioxide; inhibition of peroxidation of DNA and proteins; induction of apoptosis by inhibiting DNA synthesis in cancer cells.
Furthermore, tocopherols and tocotrienols can be added to foods for the stabilization of polyunsaturated fatty acids.
Vitamin E, or tocopherol, is widespread in foods, especially in oily fruits (such as olives, peanuts, corn) and in wheat seeds; it is also present in cereals, nuts and green leafy vegetables.
The daily requirement of vitamin E is around 8-10 mg.

Vitamin E deficiency –
Deficiency of vitamin E, or tocopherol, is generally linked to a situation of malnutrition and in younger subjects it can cause defects in growth and development. In general, the lack of vitamin E can be the basis of the onset of nervous system disorders and problems with the general metabolism.