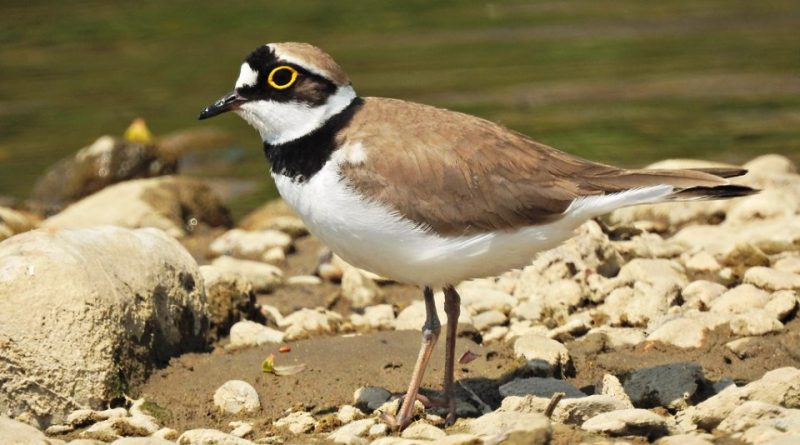 The Little ringed plover (Charadrius dubius Scopoli, 1786) is a bird belonging to the family of the Charadriidae.

Geographic Distribution and Habitat –
The Little ringed plover is a migratory bird with a very wide nesting area; it ranges from the Atlantic coasts of Europe to North Africa, to the Far East and Japan, basically below the 60th parallel.
In Europe, the species breeds while wintering takes place south of the Sahara, from Senegal to the Gulf of Guinea, up to Somalia and Niger, Lake Chad, the Nile Valley and Sudan.
Small wintering contingents are also found in some sites in the Mediterranean, including Italy, where a few dozen pairs are regularly registered on the two major islands.
The world population is estimated to be several hundred thousand individuals.
Its nesting habitat is close to streams or lakes, on sandy or stony soils with little vegetation, generally at low altitude, but occasionally even up to 2000 m. It can also be found in similar man-made environments, such as gravel pits. 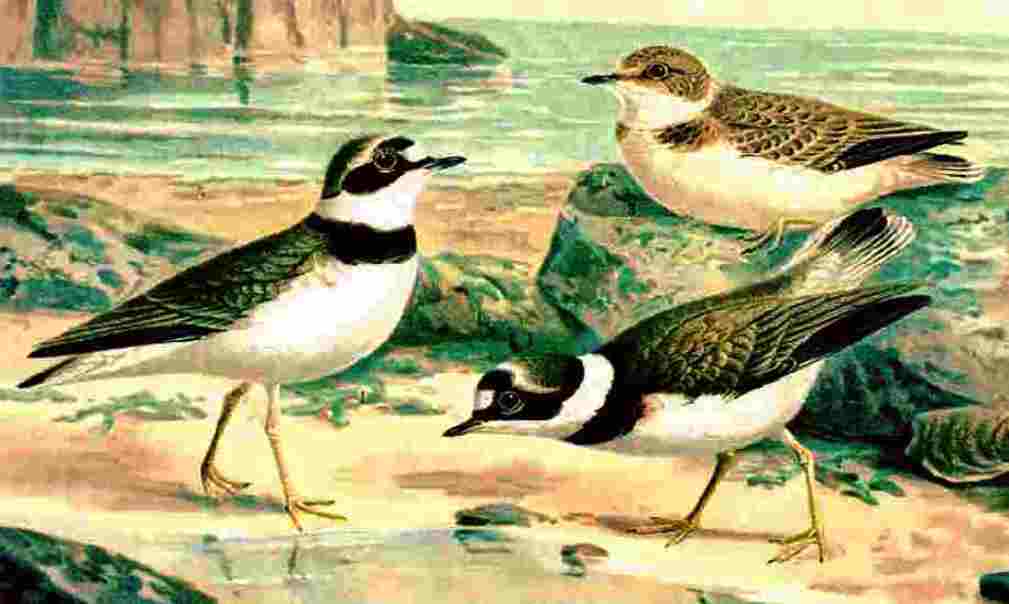 Description –
The Little ringed plover has a length of 15-18 cm, with a wingspan of up to 35 cm and is recognized above all because the garment has a complicated black and white pattern evident especially in the adult male in summer plumage.
There is a sexual dimorphism between the two sexes where the male, in wedding dress, has predominantly brown upper parts with a characteristic black and white pattern on the head and a black pectoral band, narrower in the center and contrasting with the throat and the sides. completely white lower; the eye is surrounded by a yellow periocular ring, the legs are fleshy pink. The female in wedding dress is very similar to the male, but has more faded and shaded black parts.
In the winter period both the juveniles and the adults are similar and have a completely white and brown livery with some shades of black on the head and on the pectoral band. In all the clothes the beak is mainly black with a little orange at the base of the lower jaw; the beak is also short and dark and the legs are pink and not particularly long.
The wing band is always very thin and difficult to notice.
Its most common verse is a “plus”, often repeated many times in the event of an alarm.

Biology –
Charadrius dubius nests in shallow, dug holes in the sandy soil.
The nesting period takes place between April and June, then migrates to the wintering areas, where it will arrive by September.
The reverse migration, on the other hand, occurs in the period of March and this bird generally moves alone or in small groups of no more than 10 individuals, and also during the nesting it hardly forms colonies.

Ecological Role –
The Little ringed plover lives in habitats where there are stony or gravel formations, so it prefers shores and islets of waterways, lakes, ponds, coastal lagoons, salt flats. In recent times it has been observed that it has begun to colonize artificial environments with characteristics similar to natural habitats: substrates of inert materials for construction, sand or gravel pits.
The small courier feeds mainly on insects (especially larvae), small crustaceans, molluscs and worms.
It is a bird with a lively nature and has a rapid and low flight with regular wing beats. On the ground, he runs quickly and makes sudden stops to collect food.
According to the IUCN red list, the species is considered to be of minimal risk. The main threat to this species is the fragmentation and loss of habitat, for example due to the regulation or pollution of waterways.