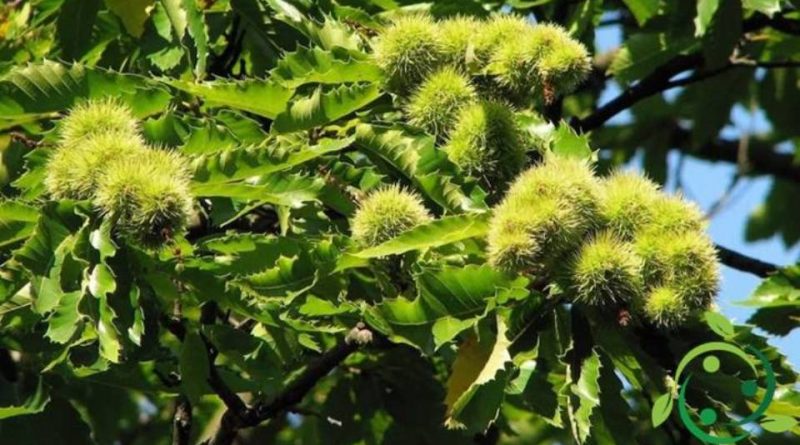 The European chestnut or simply Chestnut (Castanea sativa Mill., 1768) is a tree belonging to the native Fagaceae family of Europe.
In recent decades, the Japanese chestnut has often been introduced for phytopathological reasons (Castanea crenata Siebold & Zucc., 1846). The populations present in Europe are mostly attributable to European chestnut seedlings or European chestnut trees grafted onto the Japanese or to hybrids of the two species.
As for the propagation of the Chestnut this can happen by seed or by cutting.
With the first, there will always be a population of plants with different characters, while in propagation by cuttings, an individual identical to the mother plant is obtained.
Although chestnut trees produce very many basal suckers, these suckers tend to deteriorate rapidly if detached from the roots of the mother plant, and therefore, the fastest method of propagation is always sowing, or cutting.
Chestnuts can also be sown in pots, but they do not tolerate transplantation as the root system, when it is still small, is quite delicate. For this reason, sowing is done directly at home, or in large containers, where the sapling can remain until it has reached a good size.

Sowing –
The chestnuts, harvested in September, should be placed with sand in a cold and dark place, until the following spring, when they are buried, placing them 2-3 in each postarella, practiced in a rich and very well drained soil.
Direct sowing from about 90% germination. However, it is necessary to use healthy nuts from a mature tree over 10 years old.
Small plants should be cared for more than an adult tree, as they tend to dry out quickly in the event of prolonged drought.
When the young trees have finally reached one and a half meters in height, they are grafted with the most widespread and resistant varieties to various diseases.
As is known about a century ago, immense forests of American chestnut trees (Castanea dentata (Marsh.) Borkh. 1800) covered the eastern United States. The tree, native to the United States, was attacked by a chestnut fungus in the 1930s and most of the forests were destroyed.

Today agronomists have developed new varieties of American chestnuts that resist blight and the species is returning to be cultivated.
As mentioned, direct sowing is the easiest way to propagate chestnut.
However, this is not the only way to grow new chestnuts. You can also start propagating chestnut cuttings. In this way, young seedlings will already be obtained with the same genetic heritage as the mother plant.

Cutting –
Let’s say right away that the propagation of chestnut cuttings is more difficult than direct sowing.
To start producing chestnut cuttings you need to cut an appropriate piece of a chestnut branch, place it in moist soil and wait for it to take root.
To do this you need to find a young and healthy tree with a strong presence of green. It is necessary to use sterilized garden scissors to make a cut from which to obtain a cutting of 15-25 cm, from a tip of the terminal branch as thick as a crayon.
At this point you need to cut the bark from two sides of the cutting base, then dip the base in a hormone that promotes the formation of roots, which you can also prepare.
It is then necessary to put the lower half of the cut in a humid mixture of sand and peat (2: 1) in a container and place it in a plastic bag, in which some holes are made (which allows the maintenance of a higher relative humidity) and keep it in indirect light.
The substrate where the cutting is placed must be kept humid and, moreover, it is recommended to spray it every other day until the roots emerge.
At this point, after the first leaves have been emitted, you can take the whole loaf of earth in which the cutting is rooted (be careful not to damage any radicle) and then transplant it into a container with good soil.
At this point it will water regularly.
The actual transplanting of the saplings, always taking care to use the earthen bread well without damaging the roots, must take place in their permanent positions in the following autumn.