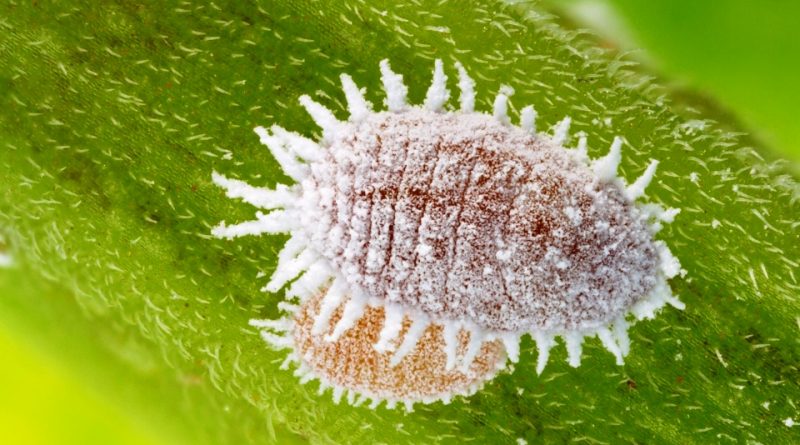 The Citrus mealybug (Planococcus citri Risso, 1813) is a homopterous insect belonging to the Pseudococcidae family.

Geographic Distribution and Habitat –
Planococcus citri is a polyphagous cochineal that lives at the expense of Citrus, Ornamentals (herbaceous and arboreal) outdoors but above all in greenhouses, Vine, Fig, etc.
The insect is distributed in all regions with a temperate climate and in the greenhouses of colder countries.

Morphology –
The adult female of the insect measures about 2.5-3 mm in length and has a flattened shape and the body covered with a waxy powder; in fact the body color is yellowish or pink, but it is masked by the waxy dust. It is surrounded by 18 waxy rays of equal length, with the exception of the two caudals, which are longer. The ovipack, which contains the yellowish eggs, is fluffy cotton-like, shapeless and longer than the body.
The male is 1 mm long, has wings and has a reddish-brown body. It has two long waxy rays and well developed, but not digitiform, ventral genital processes.
The nymphs are about 0.5-1 mm long when ripe and are yellowish in color.

Attitude and Life Cycle –
Planococcus citri usually overwinters at the 2nd age nymph stage; however it can overwinter also in other stages, sheltered among the vegetation or between the cracks of the trunk, or at the base of the collar.
In spring the females begin to ovipose, occasionally due to parthenogenesis, an operation that takes place in an ovisac formed by wax flakes; this ovisacco takes on a cottony appearance and can contain up to 600 eggs.
The nymphs born after an incubation period of a few days, are usually located under the rosette of the fruit peduncle and subsequently can invade the entire epicarp and in particular the points of contact between the fruits, giving rise to ever more numerous colonies with abundant honeydew production.
Other phytophages can be found in these clusters, including the larvae of the Lepidoptera Criptoblabes gnidiella Mill, which damage the flowers and fruits.
This insect can carry out a variable number of generations, influenced by the climate, which vary on average from 2 to 6.
In the southern regions, depending on the environmental conditions, it usually completes 4 to 6 generations per year, with populations reaching their maximum density in autumn. In northern Italy the generations are reduced to 2 or 3 while in the heated greenhouses the cochineal multiplies continuously.
These aggregations cause damage that is direct and indirect:
– direct ones are related to the subtraction of lymph;
– indirect: production of honeydew and abundant waxy secretion, with consequent development of fumaggini.
In these conditions the fruits are depreciated because they are smeared with honeydew, then covered with smoke and wax flakes; strong infestations also cause fruit to fall. The attack of Planococcus citri also favors the presence of other insects including the larvae of the Ficitide Cryptoblabes gnidiella moth that find refuge among the waxy masses; these larvae damage the flowers and fruit.

Ecological Role –
The populations of Planococcus citri are favored by a series of factors, many of which are linked to original errors in the creation of trees or greenhouse management and / or exaggerated specializations.
To remedy these infestations, a series of agro-ecological practices must be implemented, such as limitations of specializations, interruption of crops with hedges or other crops that are not subject to, limitation of nitrogen fertilization, avoiding (in greenhouses) excessively humid and hot conditions.
The planococcus citri containment technique, in addition to following careful applications of agro-ecological techniques (which must be detailed case by case), must in any case be performed with biological control systems.
This consists in favoring, through host species and insertion of cultural biodiversity, the presence of numerous natural enemies such as the Coccinellidi of the genus Scymnus, the Chi locorus bipustulatus, the Lindorus lophantae, the Neuropter Sympherobius pygmaeus and others.
To this technique which, we repeat, must be thought about in advance in the design phase of the plants or crops, we can add that of the diffusion and launch in the open field or in the greenhouse of entomophages such as:
– The Hymenoptera Encirtide Leptomastix dactylopii and the Coccinellida Beetle Cryptolaemus montrouzieri. Among the predators: Chilocorus bipustulatus (L.), Exochomus quadripustulatus (L.), Lindorus lophantae (Blais.), Scymnus includens (Kir.), Scymnus redtembackeri (Mulsant.), Cryptolaemus montrouzieri (Mulsant.), (Coleoptera: Coccinellidae ), Sympherobius pygmaeus (Ram), (Neuroptera: Crisopide), Leucopis sp. (Diptera: Cameids), (Oophagous larvae). Among the parasitoids: Leptomastidea abonormis (Giraul) (endophagus), Leptomastix dactylopii (Howard) (endophagus), Anagyrus pseudococci (Giraul) (endophagus), (Hymenoptera: Calcidoidei).
Furthermore, it is important to implement an agronomic struggle which essentially consists of cultivation practices that favor the aeration of the foliage and the elimination of attacked fruits.
The chemical fight, unfortunately still widespread practice, even if at the moment it seems to curb infestations, in the medium to long term it manifests all its scientific and technical limitations, interfering with fauna and entomofauna with worse effects than the remedy.
The chemical control is carried out with intervention thresholds estimated in about 5-10% of infested fruits, in the summer and slightly higher in the autumn. The interventions are carried out in the summer months, when there is the maximum presence of colonies, taking care to use low doses especially in the presence of high temperatures. The products used are:
– White oils, or White oils activated with Phosphorganics or Pyrethroids and, sometimes, also with fungicides to combat fumaggini.
In spring, sexual traps are often installed to “target” the intervention on the young, more sensitive nymphs, making the treatment more effective.