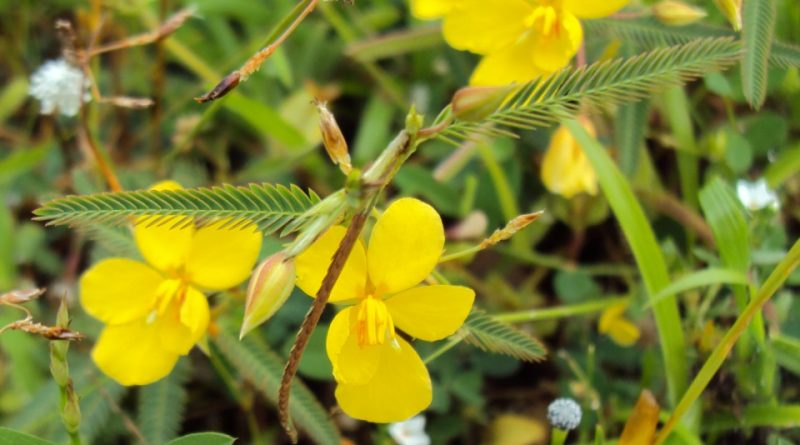 The Cassia sensible (Cassia aldabrensis Hemsl.) Is a shrub species belonging to the Fabaceae family.

Systematics –
From the systematic point of view it belongs to the Eukaryota Domain, Kingdom Plantae, Magnoliophyta Division, Magnoliopsida Class, Fabales Order, Fabaceae Family, Caesalpinioideae Subfamily and therefore to the Cassia Genus and to the C. aldabrensis Species.
Currently seven varieties are hypothesized but the systematic studies have yet to verify whether they are adaptations, subspecies or varieties, independent from the taxonomic point of view.
The term is synonymous:
– Cassia mimosoides sensu Baker.

Etymology –
The term Cassia comes from the Greek name κασια casia used by Dioscorides for a plant belonging to this genus or a similar one, taking up the Hebrew name quetsi’oth.
The specific epithet aldabrensis as a species originating from Aldabra, a group of islands in the Indian Ocean that make up the second largest coral atoll in the world.

Geographic Distribution and Habitat –
Cassia aldabrensis is native to subequatorial Africa, in correspondence with Tanzania and, with reference to the name of Assumption and Aldabra (near the Seychelles) which is the second largest coral atoll in the world and which emerges in the Indian Ocean, east of ‘Africa.
It is widespread, through the different varieties from Mauritius and Seychelles, throughout East Africa (Kenya, Mozambique, Namibia, etc.), in some areas of Nigeria, Ivory Coast and Mali. It then follows in India and even in Australia.
Its habitat is humid, typical of the subtropical forest.
The species is threatened by habitat destruction. 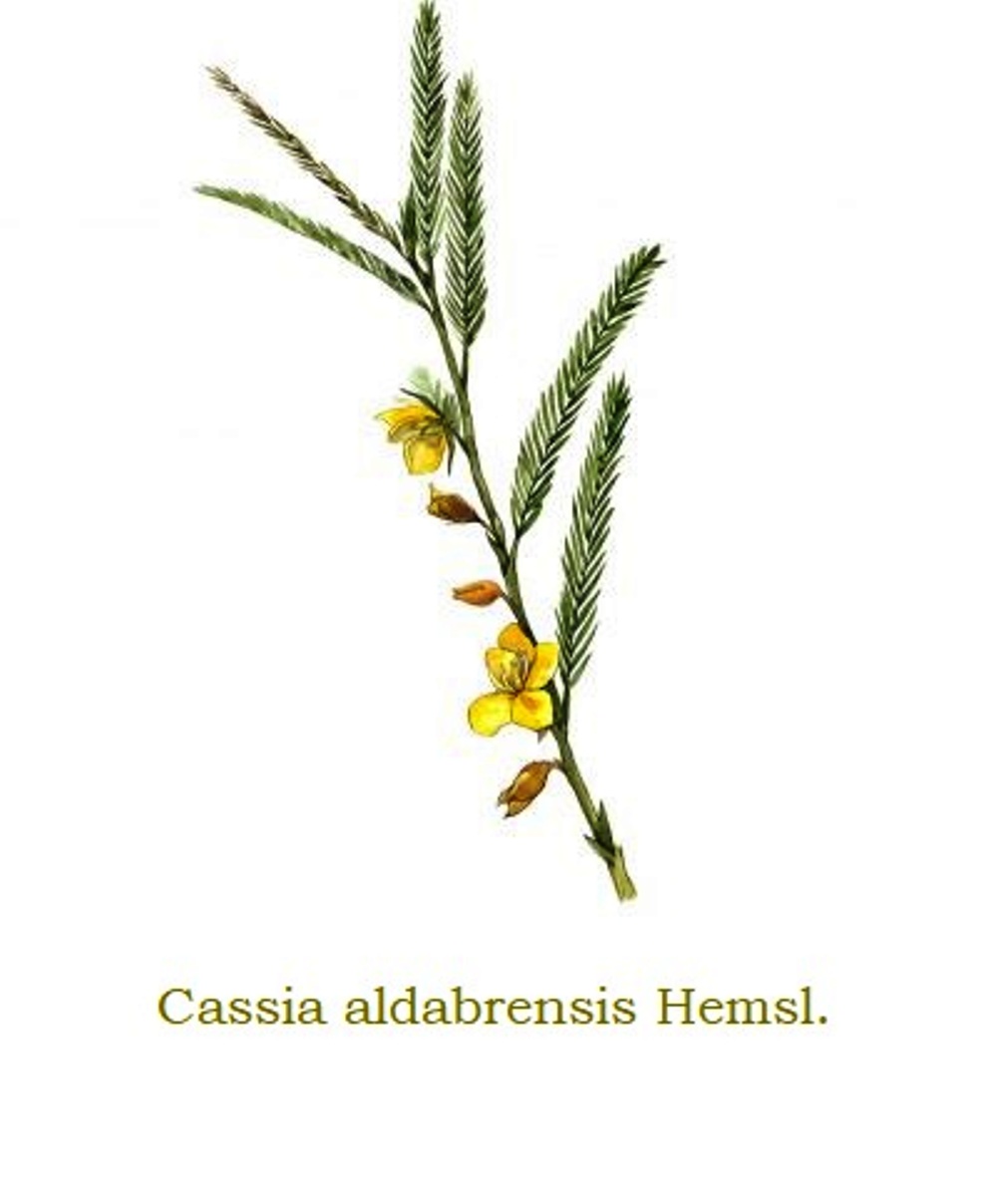 Description –
Cassia aldabrensis is a spontaneous, annual, suffrutice legume, which under ideal conditions lignifies its caule even more and becomes perennial. In this case it can measure up to one meter and a half in height.
The stem is usually pubescent with short curved hairs, more or less densely coated.
It has linear or linear-oblong leaves, placed more or less on parallel sides. They have a gland near the petiole or between the lowest pair of leaflets. In the glandular rachis, serrated or crenate, sessile leaflets are inserted, in pairs, from 16 to 80 in number, with an elongated or oblong-elliptical shape.
The fruit is obviously an elongated or ellipsoidal legume, unilocular, freely dehiscent, protruding from the calyx. Internally it has septa to separate the seeds from each other.
The seeds are brown and more or less rhomboid in shape.

Cultivation –
Cassia aldabrensis is a plant that grows spontaneously in clearings in forests, or on its edges, in wooded grasslands, in clearings used for grazing or in cultivated land, even among the waste abandoned in the open countryside. Along lakes, coasts or sandy rivers.
It grows well in humid climates although in Sudan it is common in sandy soils and in Queensland, Australia it may be one of the most abundant legumes on the black earths of the Darling Downs.
The species is not yet cultivated in Europe, while in the countries of origin it collects spontaneously, since it is still relatively abundant, rather than “wasting” the land for its cultivation.
The aerial parts of the plant are harvested in autumn and left to dry, together with the roots.
Probably no mechanized harvesting technique has been put into practice, given the lack of interest aroused by this plant in past years, so it still happens simply by hand.

Customs and Traditions –
Cassia aldabrensis is also known as makino, kawara-ketumei, ha-ma, Japanese tea bush or sensitive senna
Unfortunately, in Europe there is no certain news of its use in the past. However, it is known for its use in traditional oriental medicine.
The phytotherapeutic complex is still under study, although up to now several compounds with proven lipase action have been isolated. Among the most interesting are some flavan dimers, (2S) -3′-4′-7′-trihydroxyflavan- (4 alpha) -8-catechin; luteolin, catechins and polyphenols have also been isolated, which although they do not have a direct action on fat cells, make the total phytocomplex more powerful than the single active ingredient.
The aforementioned dimer appears to be responsible for the inhibitory action of the enzymatic lipolysis, but it is not excluded that in the phytocomplex there is some other component that assists this lipolytic action.
Clinical results have shown that this plant has a potent inhibitory effect on pancreatic lipase. That is, it manages to block this enzyme, which is responsible for breaking down fats, which as such cannot be absorbed by the body; by doing this it prevents their assimilation, or rather limits their absorption up to 30% of their total.
It is therefore very useful as a limiting factor in diets for weight control or overweight and also in altering the lipid picture.
Its action seems to be much more profound, in fact evident positive effects have also been observed on hepatic steatosis and on the accumulation of fat in the liver, kidneys and heart. It inhibits the production of collagen fibers and gives protection against dimethylnitrosamine, one of the most dangerous cancer-causing chemicals, found in the exhaust gases of diesel engines, in smoked and salty foods, in fresh fish (it is the food in which most easily found) and in cigarette smoke, to name a few.
Blood levels of triglycerides and total cholesterol were also greatly reduced.
In the confirmation phase, the astringent action of the roots, used as a remedy for dysentery.
To date, no toxic effects have been found, nor are significant side effects reported.
The effects and components of this plant are still under study, use it with great caution and always contact your doctor or trusted herbalist first.
However, the possible interference with the absorption of fat-soluble vitamins (A, D, E, K), due to the blocking of lipases, should be noted.
It is also recommended not to take it during pregnancy and breastfeeding.