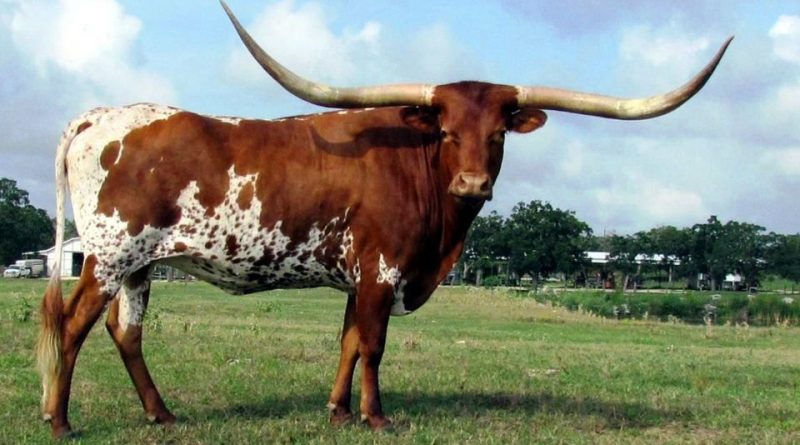 The Texas Longhorn is a bovine breed (Bos taurus Linnaeus, 1758), symbol of Texas, where it is bred for its rusticity and resistance, as well as for some uses in traditional parades.

Geographic and Area Distribution –
The Texas Longhorn cattle breed evolved from a select Iberian breed, brought by the first Spanish explorers to the New World from Spain and Portugal in the late 15th and early 16th centuries.
The animals were initially brought to the Caribbean islands, from which they were later introduced to Mexico. Over the next two centuries, the number of cattle and herds increased, expanding north into present-day Texas and the southwestern United States, while others moved south to Colombia and Venezuela.

Origins and History –
The Texas Longhorn is a bovine breed, a symbol of Texas and was the most bred breed in the USA before the introduction of Hereford.
This breed, as mentioned, originates from Iberian cattle brought to the Caribbean Islands by the first explorers between the late 15th and early 16th centuries.
The Texas Longhorn played an important role for European colonizers, as sources of food, skin, tallow and labor, and with the raids that killed indigenous peoples they had great open spaces in which to live freely.
In the 19th century the colonists gathered the Longhorn bradi to derive more resources, as well as introducing other fatter breeds. Texas cattle lost popularity because their horns made them awkward to carry and by the end of the 19th century they were threatened with extinction as a result of crossbreeding and reduction in numbers. Despite efforts to conserve the breed, numbers are still low in 2015 and the Livestock Conservancy classifies this breed as critically endangered. According to a 2013 Livestock Conservancy census, the global population of this pure and ancient breed could be just over 3,000 head, including about 1,200 in the United States.

Morphology –
The Texas Longhorn is a medium-sized breed of animal, characterized by long and imposing horns that can reach up to 1.2 m in length, with apexes of 1.8 or 2.0 m.
The breed has numerous coats of which the most popular are the mottled and spotted ones.
This breed also has a good ability to live in difficult environments, a weight that can range from 350 kg to 550 kg.

Productive attitude –
The Texas Longhorn is bred for its extreme hardiness and resistance, as well as for some uses in traditional parades. The breed, in fact, is also used to be saddled due to its docility.
Its meat has an intense flavor that reflects its wild origin.
It is one of the most majestic and ecological breeds existing today, known for its characteristic lateral and curved horns, developed as a defense from predators. It is appreciated for its healthy characteristics, the ability to proliferate in difficult and marginal environments, with little maintenance by the breeder, and for the economic advantage of their breeding, thanks to the natural rusticity, resistance to diseases and fertility.