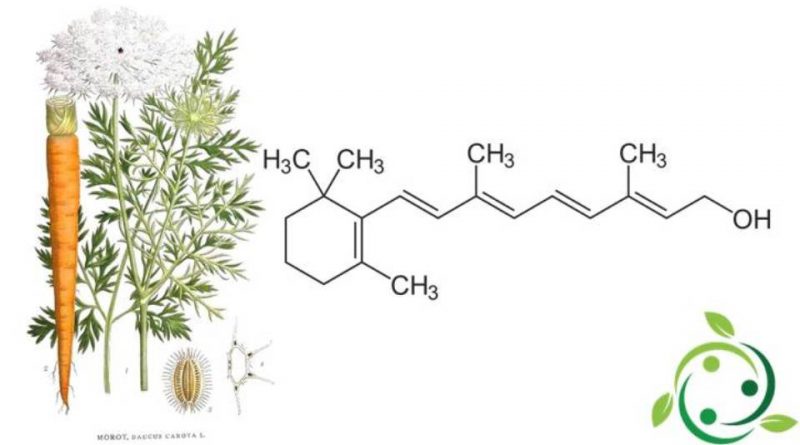 Retinol, whose term in the IUPAC nomenclature is: (2E, 4E, 6E, 8E) -3,7-dimethyl- 9- (2,6,6-trimethylcyclohex-1-enyl) nona- 2,4,6, 8-tetraen-1-ol is known more commonly as Vitamin A or, also, Axeroftol.
Retinol has a brute or molecular formula: C20H30O.
Vitamin A comes in three different forms: alcoholic (retinol), aldehyde (retinaldehyde) and acidic (retinoic acid). They are isoprenoic derivatives, consisting of the union of 4 isoprene chains.
Among the carotenoids, vegetable pigments, are found in the body above all: α-carotene, β-carotene, lutein, zeaxanthin, cryptoxanthin and lycopene.
Vitamin A and its precursors, called Carotenoids (such as Provitamin A or Betacarotene, transformed into Vitamin A in the intestine), represent fundamental substances for the health of the visual system. They are in fact components of Rhodopsin, or the photosensitive substance present on the retina (for this reason Vitamin A is also called Retinol). Vitamin A is also important for the well-being of the skin and mucous membranes, for the general growth of the individual as a development factor, since it facilitates the differentiation of cells, and finally for the maintenance of efficiency and cellular integrity of the visual system and immune. Its lack can induce malformations of the fetus, development difficulties, immune problems and sight difficulties, up to serious visual alterations (the lack of this Vitamin is one of the first causes of childhood blindness).
Retinol is present in foods such as: butter, liver, cheese, milk, cod liver oil, fish, eggs, orange, yellow or red and green leafy fruits and vegetables such as citrus fruits, apricots, watermelon, carrots, fruits of woods, melons, peppers, tomatoes, pumpkin (a good part is lost with cooking and / or degraded with exposure to light).
Vitamin A is mostly present in foods of animal origin, especially in the liver and spleen, followed by milk and derivatives and eggs. However, since meat, milk and eggs are rich in cholesterol, it is recommended to take it mainly through fish and derivatives, and through vegetable sources. The carotenoids, from which the body obtains vitamin A, are particularly present in plant tissues and photosynthetic microorganisms. Among the plant tissues, those with yellow-orange color are particularly rich (since these factors are directly responsible for this type of coloration) and those with leaves.
The lack of vitamin A determines the growth inhibition, deformation and fragility of the bones and serious modifications of the epithelial structures and reproductive organs.

Vitamin A in fact regulates the differentiation of mucous epithelia and its deficiency causes keratinization of the epithelia with a process called squamous metaplasia. Its deficiency can also induce dryness of the skin and respiratory, digestive and urinary mucous membranes.
Another important alteration concerns the visual function. A low amount of rhodopsin also determines the need for greater light stimulation. Therefore the minimum amount of light needed to trigger the mechanisms of vision increases. This phenomenon determines a decrease in adaptation to low light (twilight blindness or night blindness, hemeralopia). In the most serious cases of vitamin deficiency, keratomalacia can also appear, i.e. dryness of the conjunctiva and cornea that can lead to permanent eye damage up to complete blindness.
Vitamin A deficiency can also lead to increased maternal mortality in pregnancy.
As for the excess, the Ministry of Health currently recommends a daily dose of 800 RAE / day (0.8 mg of retinol / day). The Italian Society of Human Nutrition (SINU) recommends an increase in the daily dose of approximately 100 RAE / day in the case of pregnant women and approximately 350 RAE / day in the case of breastfeeding. Intake of vitamin A doses ≥300 mg may result in acute intoxication with nausea, vomiting, headache, loss of coordination and visual disturbances. In extreme cases, death.
Compared to cases of acute toxicity, those of chronic toxicity are more frequent as it is sufficient to take daily doses exceeding the storage and elimination capacity of the liver both through frequent consumption of foods rich in vitamin A and by means of supplements. This may involve the appearance of a symptomatology characterized by loss of appetite, muscle pain, anemia, hair loss and various neurological changes.