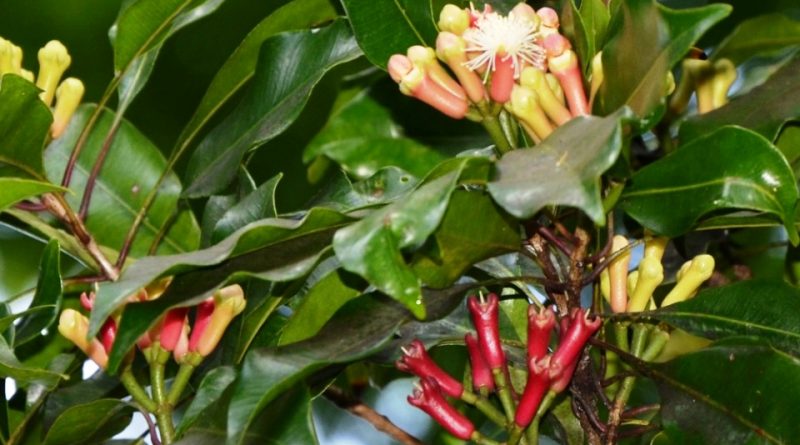 Geographical Distribution and Habitat –
Syzygium aromaticum is an Indonesian plant that grows spontaneously in the Moluccas, Antilles, Madagascar and Indonesia. This plant was introduced to the island of Réunion by Pierre Poivre (1719-1786) and from there, it was transferred to other areas to be cultivated for the so-called cloves. 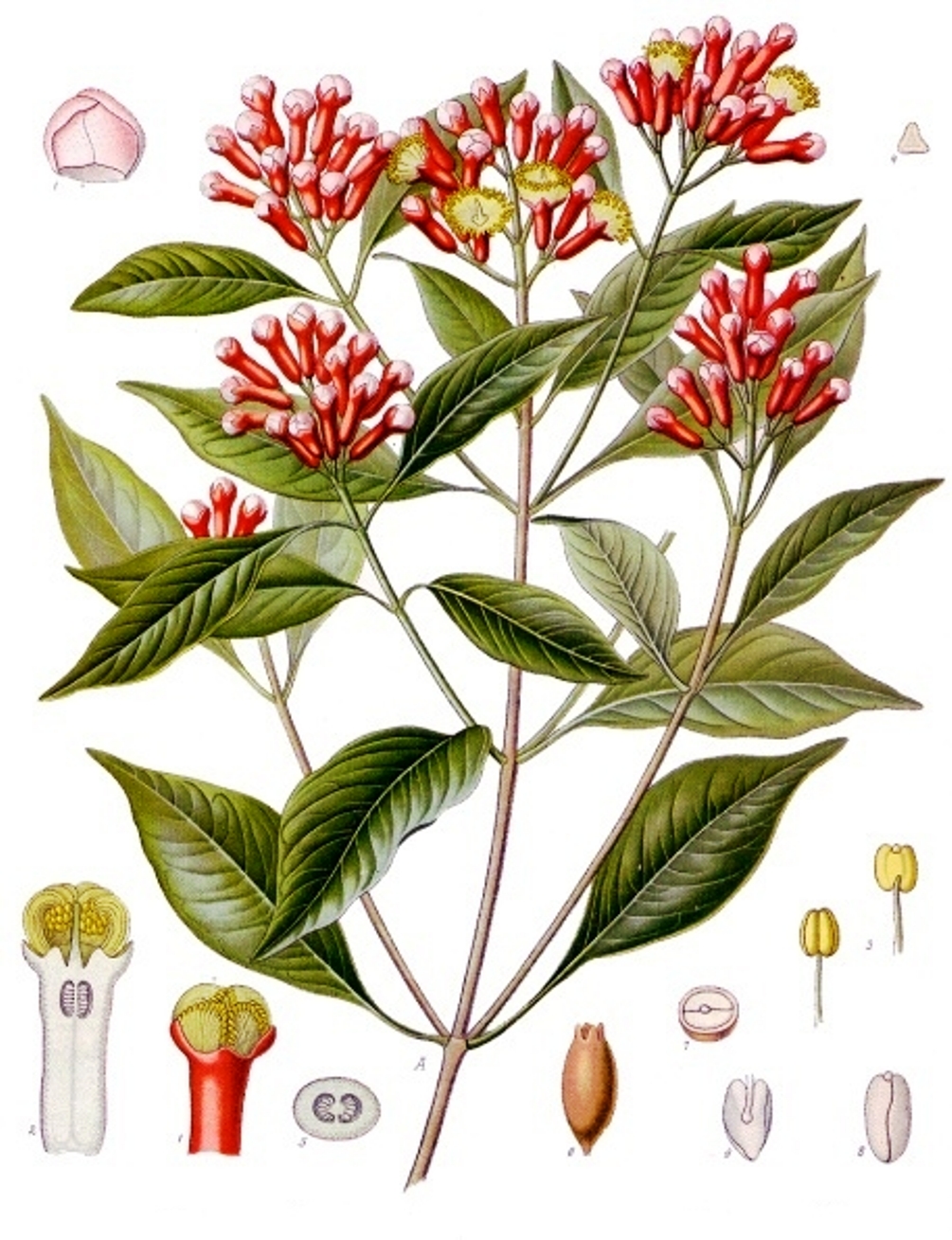 Description –
The clove plant is an evergreen tree 10–15 m tall.
It has a rounded shape and ovate-lanceolate leaves, opposite, reddish in color when young that gradually become a dark green hue which, when viewed in transparency, have numerous translucent dots rich in essential oil.
The panicle inflorescences are composed of numerous flowers each of a color varying from crimson to yellow.
The flower buds, which dried form the cloves, are formed by a long gamosepal calyx consisting of 4 sepals and 4 still closed petals that form the central round part.

Cultivation –
The cultivation of the clove plant can be carried out with good results only in countries with a climate similar to that of origin.
In Italy, as in other parts with a temperate climate, cultivation can become difficult as the plant suffers from frosts and rain and soil conditions that are not particularly suitable.
For its cultivation, however, refer to the specific sheet.

Uses and Traditions –
The flower buds of Syzygium aromaticum are collected and dried and make up the spice called cloves.
The name cloves is simply due to the carnation-like shape that buds take when dried.
The main areas of cultivation are: Zanzibar, Indonesia and Madagascar.
This spice, widespread throughout the East, was used as an ingredient in perfumes and a medicinal principle already in China 2200 years ago.
It was transported to the West via the caravan routes and already there are archaeological traces in Syria in the eighteenth century BC.
Already the ancient Romans (the patricians) used this spice for its antiseptic properties, and to calm the pain in the teeth. It became a rare spice but known in Europe through the way of incense, since the Middle Ages, and Dante himself, speaks of it as an absolute luxury item (Inf. XXIX, 127-129) used by the Sienese shakers to make the embers for millionaire roasts.
Then came in 1500, when the Europeans began to import this spice through the Portuguese returning from East Timor and the Dutch, who discovered an excellent source in the island of Zanzibar and in the Maldives: as already for Cinnamon, they became the main importers of one of the most loved and dearest spices. The Dutch and Belgians subsequently obtained essential oil which became a much loved component of cosmetics, which in the two countries also flourished thanks to this.
From the food point of view, this spice has one of the highest antioxidant power (ORAC), an index of value 314.446 which is about 80 times more powerful than an apple.
Cloves are characterized by a strong, sweet and flowery scent, with a hint of peppery and “hot”. The compound most responsible for this aroma is eugenol.
The taste of cloves can remember carcadè infusions. They present themselves with the characteristic nail shape that gave it its name. They are purchased whole in jars, and used for infusion.
Cloves are used in both sweet and savory. Among the best known dishes are some fruit desserts, especially apples, pandolci and gingerbreads, biscuits, creams and fillings, liqueurs and flavored wines; in Northern Italy mulled wine is very well known. In the salty they accompany game marinades, roasts, broths (especially chicken or chicken) and sometimes seasoned cheeses. They go well with some sweet vegetables, such as onions, spring onions, carrots that are often stored in preserves with the accompaniment of a couple of cloves. They are frequently used to flavor tea or some infusions.
Outside the kitchen they find ample space as already mentioned in cosmetics, and in objects, as potpourri and natural air freshener for rooms.
Cloves inserted into an orange are used as a natural alternative to camphor and other synthetic substances against moths, for wardrobe clothes.
Inserted in lemon half, they are used as a natural alternative to synthetic substances against mosquitoes in bedrooms. It works until the lemon is fresh, then it must be replaced.

Method of Preparation –
Today cloves come into almost all blends, from garam masala to baharat. They are also widely used to improve the preservation of marinated meats, as well as to flavor stews and stews.
In the United States, cloves perfume and decorate the baked pork leg. In Europe they are an ingredient in spice bread, mulled wine, fruit preserves, liqueurs and drinks.
In the kitchen, however, they are used both in sweet and savory recipes.
They are used to flavor sweets, cooked fruit, gingerbreads, biscuits, creams, liqueurs and flavored wines (for example mulled wine).
Cloves accompany meat very well: they are added to soups or soups with meat, they are used in stews, with game and to enrich barbecue sauces. They season aged cheeses, some sweet vegetables such as onions and carrots and pickled vegetables.
With this tea and infusions are often flavored. Cloves are very aromatic: to give a dish a spicy tone without covering its flavor, just one will suffice. The particular aroma of cloves, so intense and pungent and slightly fruity, has made them an ingredient of many perfumes and their essential oil is widely used in the cosmetic industry.
In Indonesia they are used to produce aromatic cigarettes, with a very particular flavor.
Putting a handful of cloves in a small bag in the closet (if you want you can add a little cinnamon) is useful to keep moths away, as well as putting them in a bowl in the pantry will keep the food butterflies away.