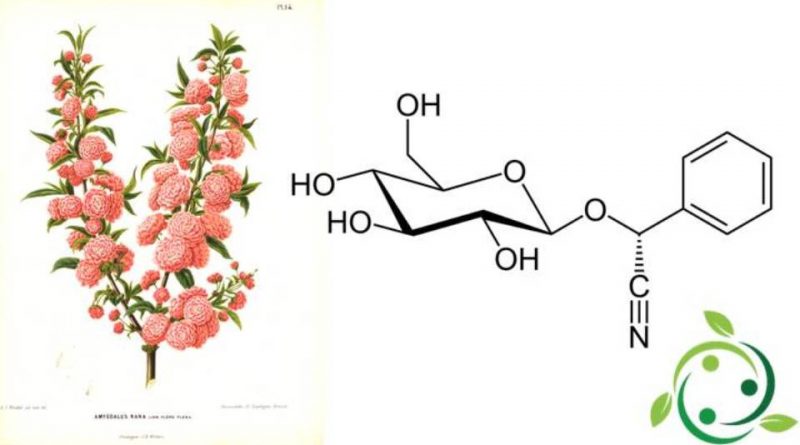 (R) -prunasin is a cyanogenic glycoside related to amygdalin. Chemically, it is the glucoside of (R) -mandelonitrile.
In the official nomenclature IUPAC is called: (2R) -2-Fenil-2 – [(2R, 3R, 4S, 5S, 6R) -3,4,5-trihydroxy -6- (hydroxymethyl) Oxan-2-il ] oxyacetonitrile.
Other names with which it is recognized are: D-prunasina, D-Mandelonitrile-β-D-glucoside, Prulaurasina, Laurocerasina and Sambunigrina.
Prunasin which has a brute chemical formula: C14H17NO6, is found in some species of the genus Prunus such as Prunus japonica or P. maximowiczii and in bitter almonds.
Prunasina is also found in the leaves and stems of Olinia ventosa, O. radiata, O. emarginata and O. rochetiana and Acacia greggii.
Prunasin is a biosynthetic and intermediate precursor of the biosynthesis of amygdalin, the chemical compound responsible for the taste of the bitter almond.
Prunasin is also found in dandelion coffee, a coffee substitute.
The biosynthesis of (R) -prunasin begins with the formation of the common phenylalanine amino acid, which in plants is produced through the path of shikimate in the primary metabolism.

The pathway is catalyzed mainly by two cytochrome P450 enzymes (CYP) and a UDP-glucosyltransferase (UGT). After (R) –prunasin is formed which is converted into amygdalin by a further UDP-glucosyltransferase or degraded to benzaldehyde and hydrogen cyanide.
Some researchers have shown that the accumulation or lack of prunasin and amygdalin in the almond kernel is responsible for sweet and bitter genotypes. Since amygdalin is responsible for the bitter taste of almonds, almond growers have learned to select genotypes that minimize the biosynthesis of amidgaline.
There is a correlation between the high concentration of prunasin in the vegetative regions of the plant and the sweetness of the almond, which is relevant for the agricultural almond industry. In almonds, the biosynthetic genes of amygdalin are expressed at different levels in the integument (mother tissue or external section) and cotyledon (kernel or parent tissue) and vary significantly during the ontogenesis of the almond.
Prunasin biosynthesis occurs in the integument, then transported to other tissues for conversion to amygdalin or degraded.
Sambunigrina, also known as (S) -prunasina, is instead the cyanogenic glycoside that is produced in the leaves and other parts of the elderberry plant (Sambucus nigra) is that the diasteroisomer of (R) -prunasina.