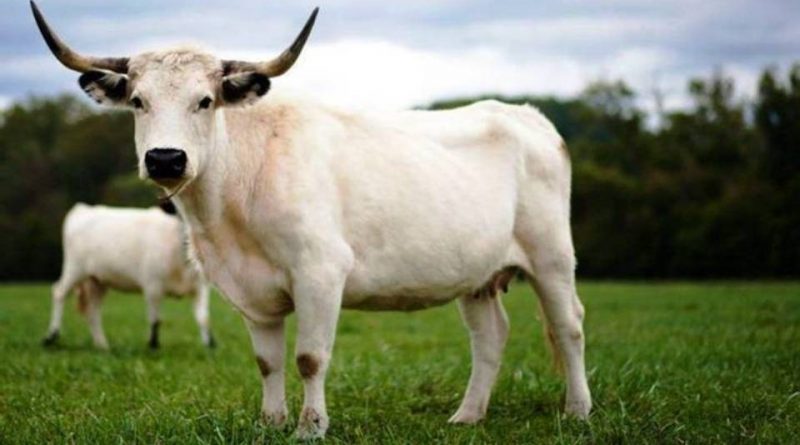 The White Park is an ancient bovine breed (Bos taurus Linnaeus, 1758) originally from Great Britain with an aptitude for meat production.

Geographical and Area Distribution –
White Park is a rare breed of cattle from Great Britain of which there are two similar semi-wild populations:
– the Chillingham Wild Cattle, located in the ancient region of Northumbria;
– the Vaynol of the Gwynedd region, which is the county of north-west Wales.
These are two populations that have separate breed status.
There are some specimens of White Park in the United States of America, where they are known as “Ancient White Park” to distinguish them from the derived American breed, the American White Park.
Since 2011, White Park cattle have been grazing in the Karower Teiche nature reserve in northeastern Berlin, Germany.
The White Parks were exported to various countries: in 1921 in Denmark and from there to Latvia (1935) and from there to Germany (1972).
In 1987 White Park arrived in Australia. In 1940, one or two pairs of White Park from the Callow herd were exported to Canada. The Canadian offspring of those cattle were transferred to the Bronx Zoo and then to King Ranch in Texas where they remained for nearly the next forty years.

Origins and History –
According to some, the origin of this ancient British breed dates back to cattle imports made by the ancient Romans; according to others it would be a race in all respects English.
Findings say that two thousand years ago, White Park-like cows grazed in the British Isles, such as Ireland, Wales, Northern England and Scotland.
The Irish epic cycle of Cúchulain, set in the first century BC, mentions the sacrifice of Magh Aí of “three hundred white cows with colored ears” (perhaps destined for sacrifice based on the dappled white color).
The first issue of the Historical Studies in Irish Agriculture of the “Royal Dublin Society” which is a book on the ancient Irish cattle breeds, states that white cattle were known in Ireland until at least 1820, the moment of their extinction on the island. Similar references are found in Welsh history in a slightly later period. Pembroke, which is a traditional county seat in the county of Pembrokeshire in West Wales, remained the main center of the breed until the 19th century: the leaders were driven in large numbers to the Severn pastures and the nearby English markets.
In 1225, following the laws approved by Henry III, several British pastures were closed and numerous herds were “isolated”, including those of Chartley and Chillingham in England and Cadzow in Scotland.
At the beginning of the 19th century, there were more than a dozen herds of White Park in Britain but most of them were exterminated at the beginning of the following century.
In Britain, the White Park registration program began in the early 1900s but in 1946 only the herds of Dynevor, Woburn, Whipsnade and Cadzow survived as servants, while the Vaynol (Faenol) and Chillinghams were semi-wild. Registration was interrupted during the Second World War and only resumed in 1974 by the “Rare Breeds Survival Trust”. Today in the UK in the UK there are 1,000 breeding White Park heads.
To trace the origin and characteristics of this breed, most of the British national populations of White Park have been subjected to DNA tests, in order to verify parenting, confirm the origin and allow the identification of breeding specimens to ensure the their effective survival in terms of conservation. The British breeding program aims to increase the desirable characteristics of the breed, while maintaining genetic diversity (heterogeneity is low due to mating between relatives for most of the twentieth century).
The “Faygate Brace” bull (born in 1906) contributed 40% of the breed’s specimens in the 1940s and “Whipsnade 281” (born in 1956) repeated this pattern in the second half of the 20th century. His grandson, “Dynevor Torpedo” is the bull that dominated the breed. Two herds, Dynevor and Chartley-Woburn, were the dominant influences during this period. The world population is now almost 2,000 fertile females, plus bulls and young specimens.
A certain impetus to the breeding of this breed has been given by the BSE epidemics and by the growing demand for genuine meats, given that this breed feeds exclusively on grazing.

Morphology –
The White Park is a bovine breed that is recognized for having a height at the withers of 125-135 cm.
It is a medium-large breed with a long body. The morphological definition is based on a 1994 British study, carried out on a sample of 200 bulls and 300 cows.
The weight of a mature bull varies from 800 to 1,000 kilograms, depending on the quality of the pasture, while adult cows are generally from 500 to 700 kilograms.
The muzzle is pigmented black.
The coat is porcelain white with colored points (black or red).
The horns can vary in shape but most grow forward and upward in a graceful curve in the cow, while in the bull they are thicker and shorter.
It is a rare breed, much loved for its ornamental appearance.

Productive attitude –
In Great Britain, in their native environment, White Parks are known both for their distinctive appearance and for their preference for grazing on rough terrain. The breed is suitable for non-intensive production. Some herds are kept outdoors throughout the year on uneven mountain pastures without additional shelter or feed. They are docile, easy to give birth and have a long productive life. Some traits may vary depending on their location.
Until recently, White Parks were a triple vocation breed (milk, meat and work). Even in recent times they have been bred for milk production: cows from the Dynevor herd were milked in 1951 albeit with moderate results. White Park meat is still consumed and believed to be of high quality.
White Park is a breed that has a very soft flesh with a strong, distinctive flavor.