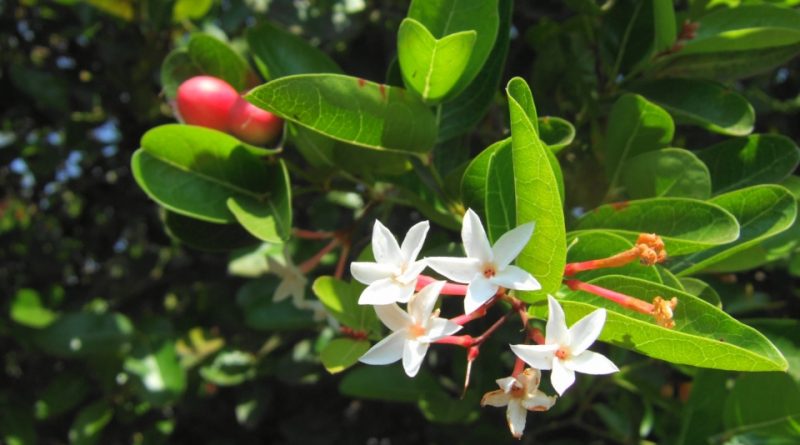 The Bengal currant (Carissa carandas L.) is a shrub species belonging to the Apocynaceae family.

Etymology –
The term Carissa is the Latinized form of the Indian vernacular name of this genus.
The specific epithet Carandas comes from American Spanish, of Guaranian origin, similar to Guarani: caranday.

Geographical Distribution and Habitat –
The Bengal currant is a plant present in subtropical and tropical areas, where it grows naturally in most of the countries of southern Asia as in the flat rain forests of Sri Lanka and in other countries such as Nepal, Afghanistan and Bangladesh, where it is found at altitudes from 30 to 1,800 m. s.l.m ..
It grows best in dry and sunny habitats, with annual daytime temperatures ranging between 23 and 30 ° C, but can tolerate temperatures between 16 and 34 ° C. The plant is found in abundance in the western part of the Konkan region, in the western coastal states of Maharashtra and Goa. However, it also naturally grows in the temperate conditions of the Himalaya hills in India and Nepal.
In the rest of India, it is present on a limited scale in Rajasthan, Gujarat, Bihar, West Bengal and Uttar Pradesh. 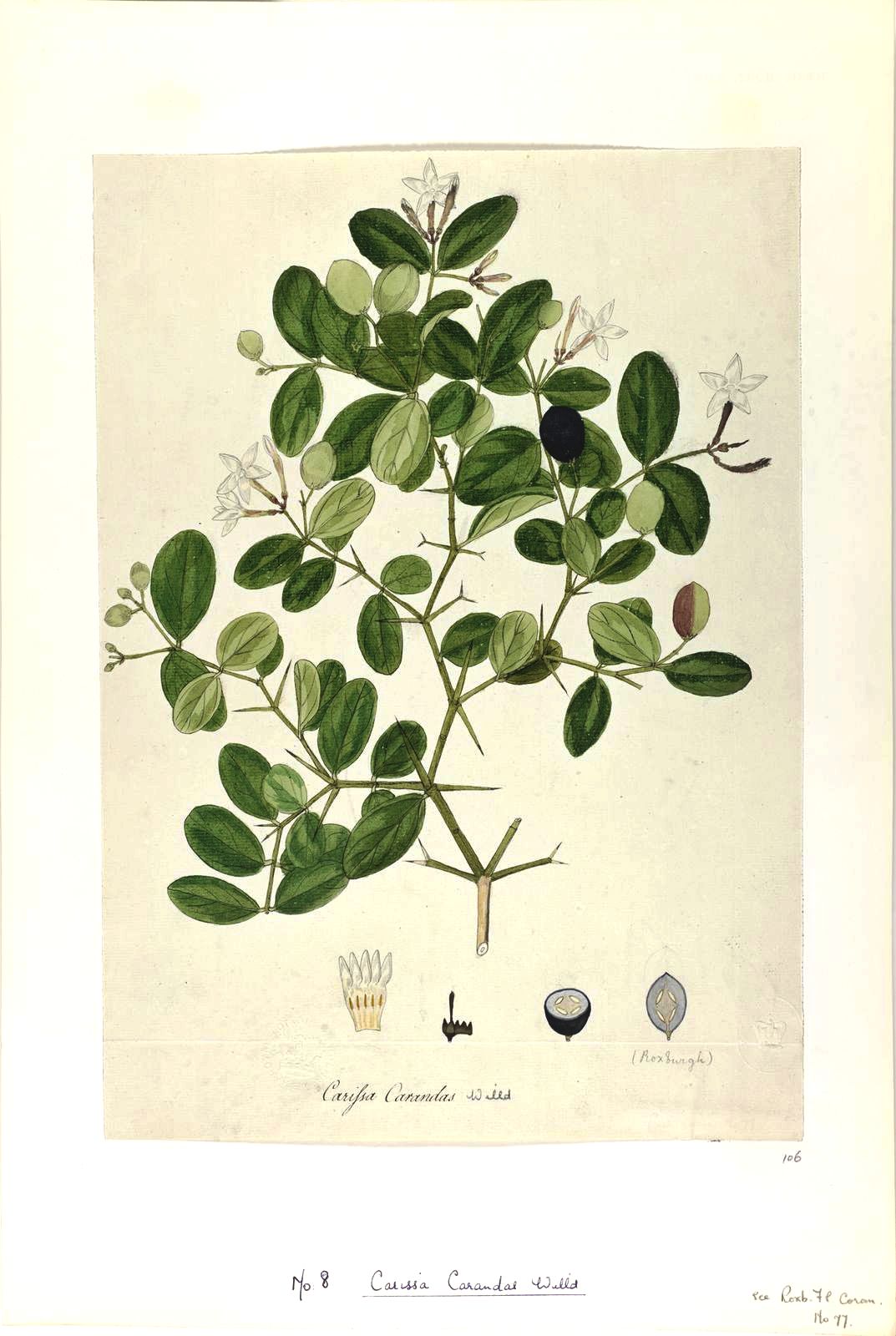 Description –
Carissa carandas is a climbing shrub or small tree that usually grows between 3 and 5 meters in height.
The stems have simple or branched sharp spines.
The leaves are fleshy, ovate and bright green in color and between 3 and 8 cm in size.
The flowers, which are around 3-4 cm in diameter, have five white petals.
The fruit is an oval or round plum-shaped berry, 1.5 to 6 centimeters long, usually bright red or brownish red in color, the flesh is red or pink, containing up to 16 seeds.

Cultivation –
The plant is usually grown through seeds planted between August and September.
Vegetative propagation is also practiced in the form of shoots or layering and cuttings can also be successful.
The moment of sowing corresponds with the first monsoon rains.
The seedlings that formed from the seeds begin to bloom two to three years after sowing. Flowering begins in March and fruit in Northern India ripens from July to September. This plant can be killed by temperatures of -2 ° C or lower.
It prefers an average annual rainfall in the range 1,000 – 1,400 mm, but also tolerates extremes of 700 – 2,700 mm.
It prefers full sun or slightly shaded areas and soils with a pH range between 6.5 and 8, tolerating extremes of 6 – 8.5.
Plants can bloom all year round.
However, it is usually a plant that is not grown commercially but also grows spontaneously.
The plant responds well to pruning and is often grown as a hedge.

Uses and Traditions –
Carissa carandas is a flowering shrub that produces berries that are commonly used as a condiment for Indian pickles and spices.
It is a very beautiful plant when it bears fruit, which is why it is often grown in the gardens of tropical and subtropical areas.
The fruits are eaten both cooked and raw, with added sugar, as they are acidic when fully ripe.
This plant, in Thailand, is mainly used to produce pickles, however, it can also be transformed into jams, jellies and puddings. In addition, fruit is also used to prepare drinks, curries, tarts and syrups.
Its fruit is used in the ancient system of Ayurvedic medicine for the treatment of acidity, indigestion, fresh and infected wounds, skin diseases, urinary disorders and diabetic ulcer, as well as bile problems, stomach pain, constipation, anemia, pathologies of the skin, anorexia and altered psychological states.
A leaf decoction is used to treat fever, diarrhea and earache.
The roots are useful for the stomach, for anthelmintic medicine, for itching and also as insect repellents.
The fruits are astringent, antiscorbutic.
With its sharp thorns, it forms an excellent barrier for live hedges.
The roots of the plant are strongly branched, making this plant valuable for stabilizing eroded slopes.
The wood is hard and is used to make small tools; it is also used for the manufacture of home furniture and for turning.
The presence of many terpenoids has been reported in this plant. Contains pectin and ripe fruit exudes a white latex when they are cut from the branch.
In particular, the presence of a mixture of sesquiterpenes, such as carissone and carindone, as a new type of terpenoid C31 has been reported. Other products present are the pentacyclic triterpene carissin.
In addition, the plant is rich in iron, vitamin C, vitamins A, calcium and phosphorus.

Method of Preparation –
The fruits of Carissa carandas can be eaten both cooked and raw, with added sugar.
In Thailand, it is used to make pickles, however, it can also be turned into jams, jellies and puddings.
The fruits serve as a basis for the preparation of drinks, curries, tarts and syrups.