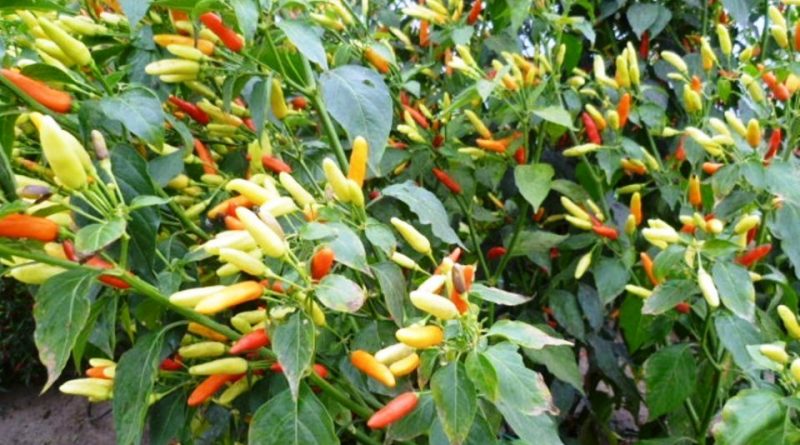 Systematic –
From a systematic point of view it belongs to the Eukaryota Domain, Kingdom Plantae, Magnoliophyta Division, Magnoliopsida Class, Subclass Asteridae, Solanales Order, Solanaceae Family and therefore to the Genus Capsicum and to the Species C. frutescens.

Etymology –
The term Capsicum comes from the Greek καψάκιον capsákion small orciolo, for the hollow structure of the fruits in the species of this genus.
The specific epithet frutescens comes from frutex shrub: with shrubby bearing.

Geographical Distribution and Habitat –
Capsicum Frutescens is a plant of origin from the countries of South and Central America where, thanks to the purely tropical and subtropical climate, the plant grows completely spontaneously.
In these areas it can reach the size of a small tree up to 2 m in height. 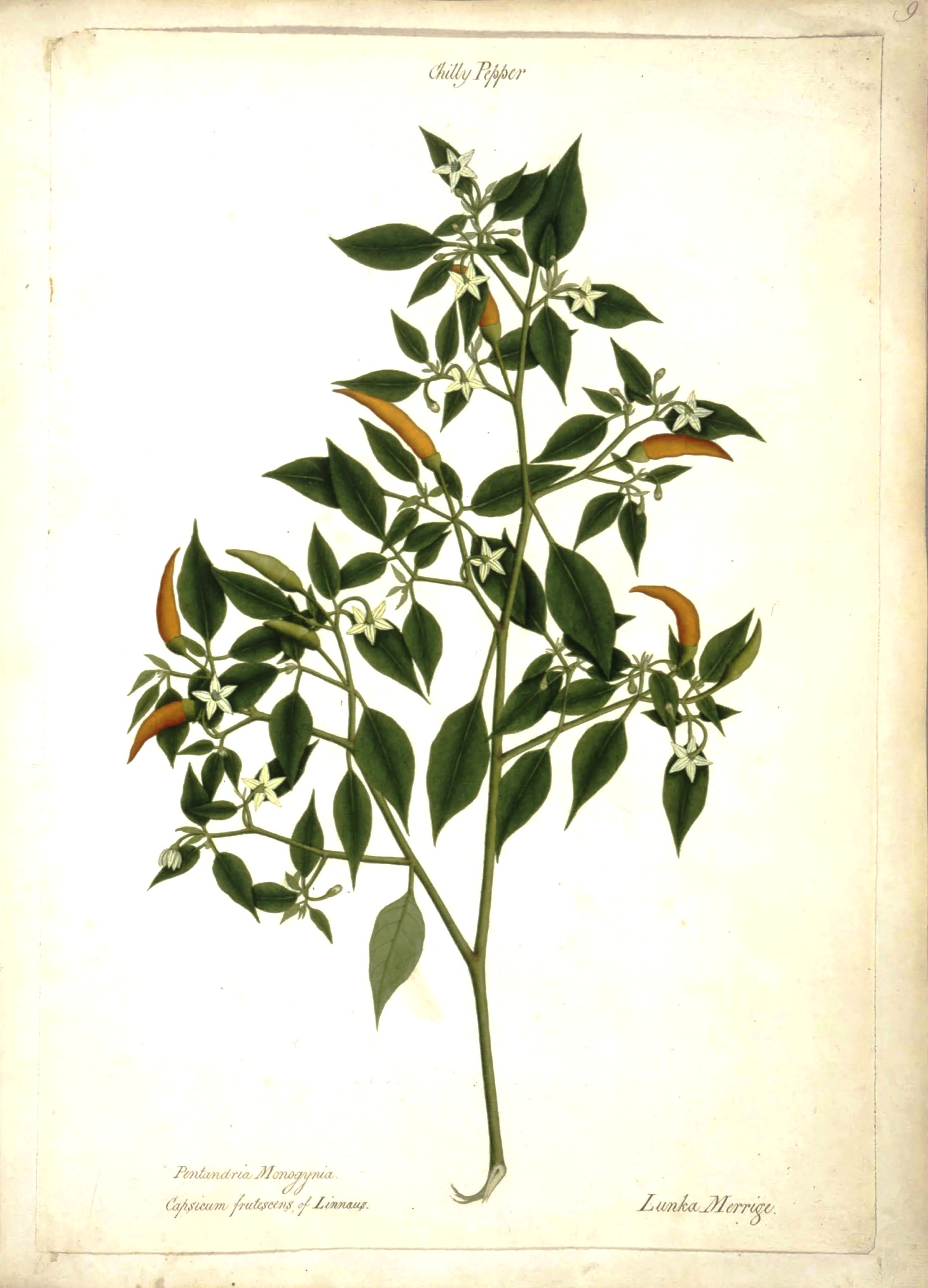 Description –
Cayenne pepper is an erect shrub, similar to a small tree, which can reach heights of 0.5 m, up to 2 m. in the countries of origin.
The leaves are lanceolate and green in color.
The flowers are single, purple, with yellow or purple stamens, with 5 – 7 petals, and appear in the axil of the leaves, one or more per node, in the summer.
These flowers can be fertilized by some pollinating insects, or they can pollinate themselves.
The fruit is a berry, particularly spicy due to the presence of capsaicin, green in color at the beginning and which when ripe can vary from red-orange to purple, passing through the various shades of yellow, orange and red.

Cultivation –
Capsicum frutescens plants are often grown as ornamental plants in the garden or in pots, but it is not the flowers that make them aesthetically interesting as the fruits, which when ripe, both in color and abundance, make these plants particularly attractive.
The most important cultivation, however, is linked to the production of hot peppers which are used in the spices of the whole word.
As for the cultivation techniques, see the following sheet.

Uses and Traditions –
Capsicum frutescens is one of the 5 main species of the Capsicum genus, which includes peppers and chillies. Within the C. frutescens species, the variability of color and shape of the fruit is low, as opposed to the other three main ones. This species is mainly grown in the Tabasco variety, to make it the Tabasco sauce of the same name.
These species are all characterized by their spiciness, due to the presence of capsaicin which is measured by a specific gradation which is the Scoville scale (or more briefly the Scoville scale).
The varieties of Capsicum frutescens grown all over the world are numerous; grown both for ornamental purposes and for the targeted production of excellent chillies to be eaten fresh, dried or as ingredients of excellent sauces.
Below is a list of the best known varieties:
– Tabasco: on the Scala Scoville, it reaches its sixth spicy power. Expressed in SHU, its degree of spiciness fluctuates between 30,000 and 70,000. We mainly know Tabasco for the sauce of the same name, widely used by the British and Americans to prepare the classic burgers. The fruits of this plant are mainly used for Tabasco sauce: it is rare to buy this loose chili pepper. Depending on the ripening zone, its fruits can be red, yellow or green. It is the only chili pepper that is more juicy than Capsicum Frutescens. His country of origin is Mexico;
– Piri Piri: this chili reached the seventh level of spiciness. It ranges between 50,000 and 70,000 SHU. We can translate his name from Swahili and means “pepper pepper”. It is a variety that grows spontaneously especially in Central and Southern Africa, such as South Africa, Nigeria, Ghana, Mozambique and Malawi. It is particularly used in Lusitanian cuisine;
– Thair Pepper: its degree of spiciness falls between 50,000 and 100,000 SHU, based on ripening. It is very spicy and pinches the tongue at a first taste; after overcoming the objective difficulties with the spicy, you can taste a nice fruity flavor. It originates from Asia;
– Thai Bangkok Upright: it is not very spicy compared to the others, it only records between 15,000 and 30,000 SHU. Its country of origin is Thailand, specifically Bangkok. It has purple shades in the maturing phase;
– New Delhi Long: SHU degrees vary between 5,000 and 30,000. These chillies are particularly red. Its origin can be traced back to India.
– Bird’s Eye Chili: also in this case its spiciness varies between 50,000 and 100,000 SHU. It originates from the Philippines, where it is known by the name of Labuyo. It comes in the form of very different colors, such as red, orange or green. Its main use is in the kitchen, for sauces or condiments;
– Mem Jolokia: its origins are Indian, precisely of Assam. Here we raise the level of spiciness a little: this chili reaches one million SHU. It has a truly unique flavor and is really very spicy;
– Bird’s Eye Demon: it is a dwarf plant. His chillies are fire-colored. The spiciness varies between 50,000 and 100,000 SHU.
Among all these, the best known is the Tabasco variety: it is a beautiful variety, from an aesthetic point of view, fundamental for the production of fruits that are used for the preparation of a very famous sauce. As well as Hungarian paprika, Tabasco sauce, whose original patent is from the American company McIlhenny, boasts an impressive spread all over the world.
All these chillies contain capsaicin and capsicin (by decomposition), carotenoids, vitamins B2, PP, C, E, provitamin A, malic and citric acid, proteins and a volatile oil. Traditionally known as invigorating and exciting.
This spice stimulates circulation.
Attention however to the toxicity of capsaicin present in the genus Capsicum. People sensitive to this substance may experience problems just by touching the plants.
Consuming the chili pepper, raw or in special preparations, is strongly discouraged for those suffering from gastritis, irritable bowel, ulcer, hemorrhoids, gastroesophageal reflux and pregnant or breastfeeding women.

Method of Preparation –
Cayenne pepper is a plant whose fruits are used raw, dried or fresh, or in sauces.
It is an ingredient capable of making even the simplest preparation a real culinary work of art. Consuming it in the right doses can only help health: the fruit contains flavonoids and capsainoids that have a powerful antibacterial effect, is rich in Vitamin C and other active ingredients useful in a diet to counteract weight gain. To complete the picture there are several antioxidant and anticancer properties.