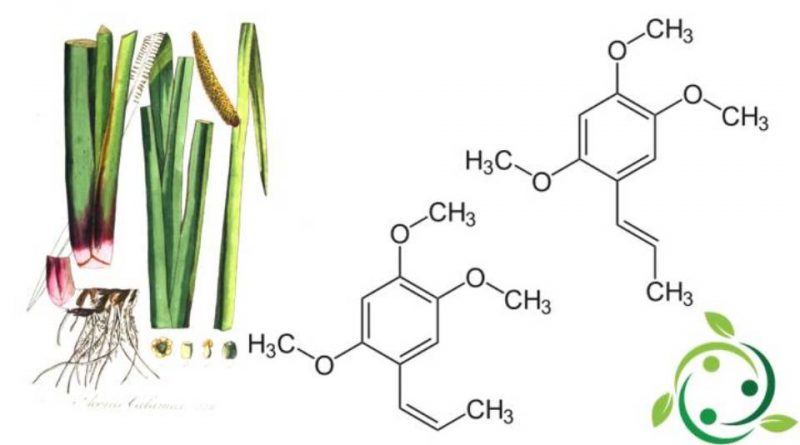 Asarone is a molecule present with two isomers (α (or trans) and β (or cis)) and whose term in the official IUPAC nomenclature is 1,2,4-Trimethoxy-5 – [(E) -prop- 1-enyl] benzene (α) and 1,2,4-Trimethoxy-5 – [(Z) -prop-1-enyl] benzene (β).
Asarone is also known by the names of alpha-Azaron, cis-Isoelemycin or 2,4,5-Trimethoxyphenyl-2-propene.
Asarone is a phenylpropanoid compound having the chemical formula: C12H16O3.
In nature, the asarone is present in some plants such as, for example, in the Asaro (Asarum europaeum L.) and in the aromatic Calamus (Acorus calamus L., 1753).
Asarone, as a volatile scented oil, is used to kill parasites and bacteria.

The intake of this molecule can follow up, depending on the quantity taken, of symptoms of prolonged vomiting which sometimes can last more than 15 hours.
Asarone is not metabolized in trimethoxyfetamine, as has been stated by online sellers.
The Committee of Experts on Flavoring Substances of the Council of Europe concluded that β-asarone is clearly carcinogenic and has proposed limits for its concentration in flavorings such as bitters based on Acorus calamus.
Β-Asarone shows antifungal activity by inhibiting the biosynthesis of ergosterol in Aspergillus nige
However, the toxicity and carcinogenicity possessed by asarone entails a difficulty in developing any drug based on its use.