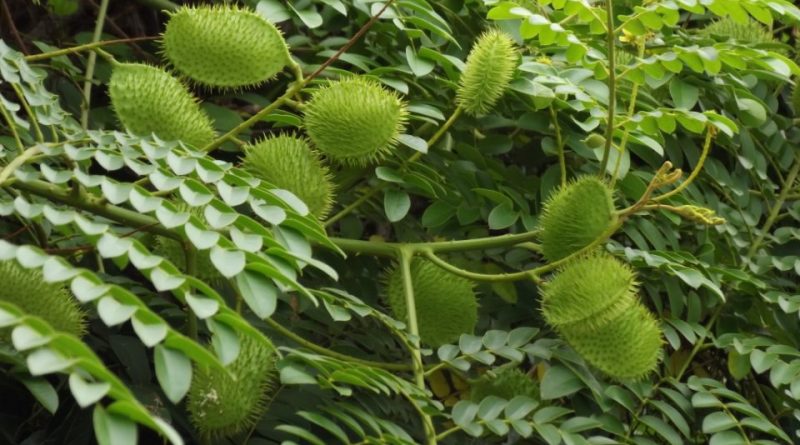 The grey nicker, nicker bean or knicker nut (Guilandina bonduc L.) is a lianose plant belonging to the Fabaceae family.

Etymology –
The term Guilandina of the genus was dedicated to the German physician and botanist Melchior Wieland (Melchiorre Guilandinus, 1519 / 20-1589) who studied in Rome and Padua and during a trip to the Middle East to collect plants he was captured by Saracen pirates. Redeemed after years by his friend Gabriele Falloppio, he became prefect of the Botanical Garden of Padua and professor of botany at the local university.
The specific epithet bonduc comes from bunduq, an Arabic vernacular term for hazelnut (ex Merriam-Webster).

Geographical Distribution and Habitat –
Guilandina bonduc is a plant with pantropical distribution and native to the coastal areas of tropical Africa. 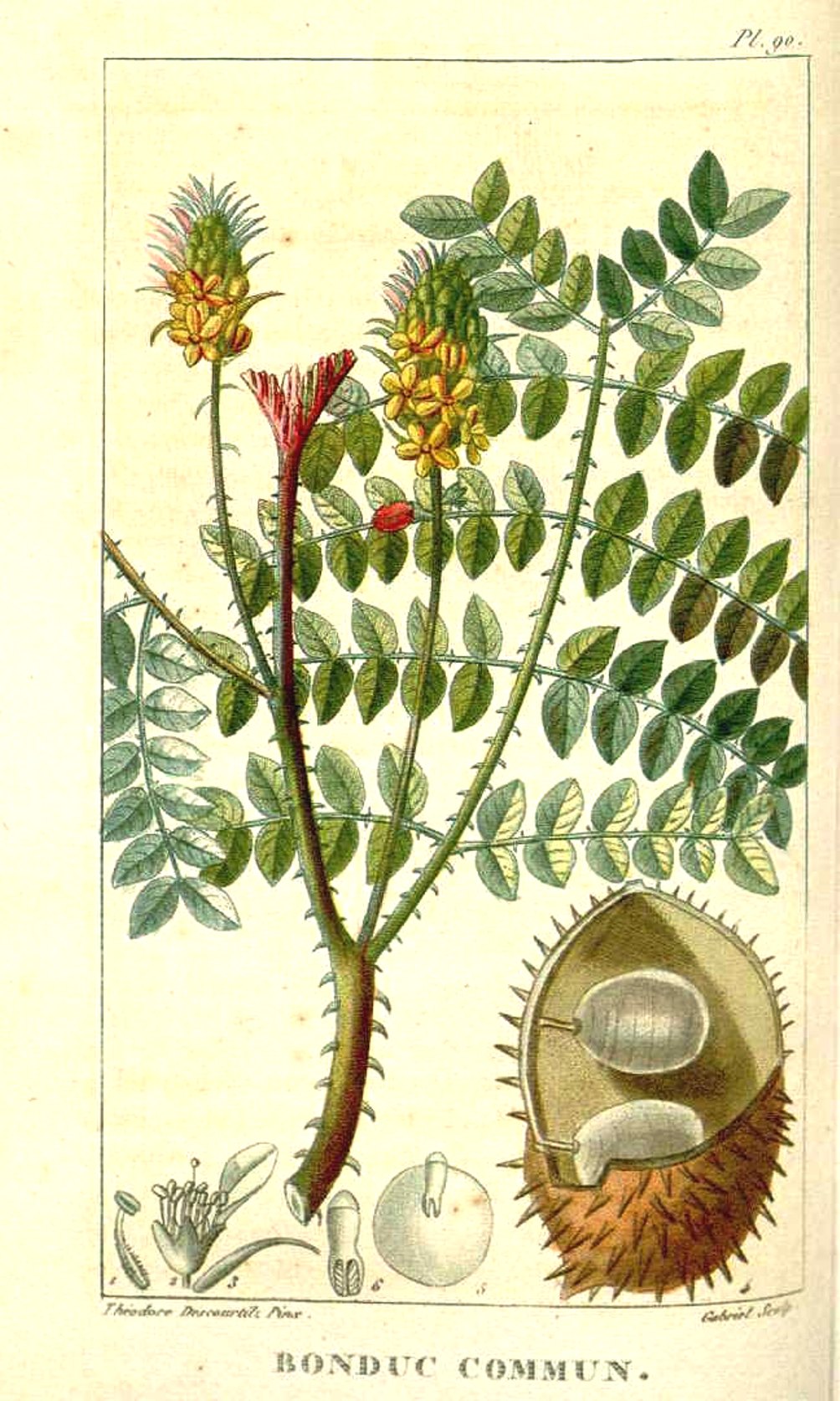 Description –
Guilandina bonduc is a lianose plant with stems up to 15 m long, usually equipped with robust spines.
The leaves are alternate, bipinnate, with 6-11 pairs of fins; pinnate or 3-5 lobed stipules, up to 20 mm long; the petiole and rachis are 15–80 cm long; opposite leaflets with 6-9 (–12) pairs per fin, oblong, 2-4 cm × 1–2 cm, rounded base, apex rounded to acute, slightly hairy at least on the central part and on the margins. The inflorescence is racemic with a supra-axillary or terminal axis 30-60 cm long, densely flowered.
The flowers are bisexual or functionally unisexual, zygomorphic, with free, unequal sepals, of about 5 mm × 2.5 mm, the lower one shaped like a cap; without petals, unequal, 6-7 mm × 2-3 mm, clawed, yellow, the upper one of different shape and size; it has 10 stamens about 5 mm long, hairy filaments towards the base; upper ovary and short style.
The fruit is a 5-8 cm × 3-4.5 cm oblong swollen pod, dehiscent, covered with rigid and long, hairy spines, containing 1-2 seeds.
The seeds are ovoid in shape, 1.5–2 cm in diameter, smooth, hard and light gray in color.

Cultivation –
The common Bonduc is a plant that in its places of origin blooms and bears fruit all year round.
The seeds of this plant float and maintain their vitality in water for long periods. This explains its presence in coastal areas in all tropics.
Guilandina bonduc is a plant found mainly in disturbed areas. In tropical Africa, it naturalized around inland villages probably due to the transport of seeds for medicinal use and for the characteristic use in popular board games.
However, the propagation of this plant occurs only by seed and in Equatorial Guinea it is cultivated for its seed oil.
Ripe Guilandina bonduc pods can be harvested from the plant or harvested after they have fallen. Other parts of plants are collected whenever necessary.
Guilandina bonduc seeds can be simply dried and stored for later use. Other parts of plants are probably used fresh.

Uses and Traditions –
Guilandina bonduc is used throughout the distribution area for its leaves, bark and roots to treat fever, headache and chest pain and as an anthelmintic.
In West Africa it is used as a rubefacient and as a tonic in the treatment of jaundice, diarrhea and rashes.
On the coast of Kenya seeds are taken and decoctions of leaves and roots are used to treat asthma and complications during menstruation, to avoid abortion and as eye drops to treat internal blood clots in the eyes.
In Tanzania the powdered seed kernel is taken with water to treat diabetes mellitus.
In Somalia, seed oil is used to treat rheumatism. A bitter extract from the seeds is known as “quinine of the poor” and is used against malaria, for example in India, but its use in Africa as a cure for malaria has not been documented.
In tropical Asia and the islands of the Pacific Ocean, Guilandina bonduc is an important medicinal plant, with largely similar uses as in Africa.
In large doses, however, it is believed to be poisonous.
In Sierra Leone and Ethiopia Guilandina bonduc is planted used for the construction of live fences.
In Equatorial Guinea, seed oil is used for cooking. The seeds are widely used as beads, as weights and as counters in board games.
The local trade of Guilandina bonduc seeds, for medicinal use, is quite common in tropical Africa.
Guilandina bonduc seeds contain bonducellin, isoflavonoid and various cassane diterpenes, including cesaldekarin A, cesalpinine B, bonducellpine A – D, α-, β-, γ- and δ-caesalpine and a bondenolide. Among the compounds isolated from the roots we mention: caesaldekarin C and caesalpin F.
The phytochemical content of other parts of the plant has not yet been documented.
Many of the compounds present in the seeds, in particular bonducellin and β-caesalpin, confirmed the antiplasmodial activity. The contradictory results of the tests on antiplasmodial activity may be due to an incorrect identification of the tested samples. Bondenolide and seed extracts have confirmed antifungal and antibacterial activity. The effects of a leaf extract on calcium metabolism and on the cholinergic receptors of the preparations of the outer muscle layer, isolated from the rat uterus in pregnancy, were comparable to those obtained with acetylcholine.
In normal rats, aqueous and ethanol extracts of 50% Guilandina bonduc of the seeds showed hypoglycaemic activity and in diabetic rats they produced a significant anti-hyperglycemic effect.
The aqueous extract also showed anti hypercholesterolemic and anti hypertriglyceridemic effects in diabetic rats with streptozotocin.
An aqueous extract of roots, stems and leaves has been found to have antiviral and anticancer activity.
The seeds also contain about 20% of oil which is particularly rich in linoleic acid (68%) and has blistering properties.
From an ecological point of view, Guilandina bonduc is widespread, not in danger of extinction or genetic erosion and is rare in germplasm collections.

Method of Preparation –
The extracts of Caesalpinia bonduc show interesting pharmacological effects, for example the modulation of the cholinergic receptors and the anti-hyperglycemic activity, which deserve further research.
In addition, its seed oil is used for both cooking and pharmaceutical purposes.