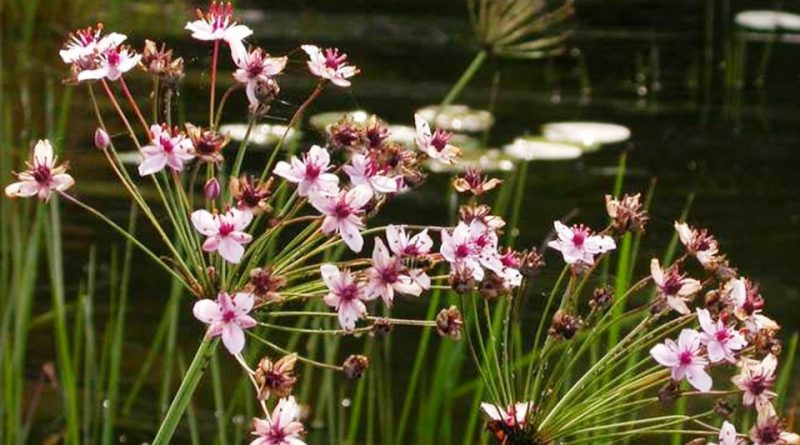 Systematic –
From a systematic point of view, it belongs to the Eukaryota Domain, Plantae Kingdom, Magnoliophyta Division, Liliopsida Class, Alismatales Order, Butomaceae Family and therefore to the Genus Butomus and to the Species B. umbellatus.

Etymology –
The term Butomus comes from the Greek βοῦς bous bue and τέμνω témno cut: tagliabue, alluding to the possible wounds to the tongue that would cause the leaves with a hard and sharp margin of this plant if the animals fed on it.
The specific epithet umbellatus comes from umbella umbrella, parasol: that is, with umbrella inflorescences.

Geographical Distribution and Habitat –
The Flowering rush is a typical species of swamps where it grows in very humid places, flooded perpetually.
It is present in Europe, Asia and North Africa.
In Italy it is present in the northern and peninsular Tyrrhenian regions up to Campania, as well as in Sardinia.
It was introduced to North America as an ornamental plant, it spontaneously entered it, particularly in the Great Lakes region, sometimes becoming even weed.
Its habitat is that of ditches, on the banks of the canals, ponds and marshy areas, but in fresh, stagnant and shallow waters, mainly in the plains. 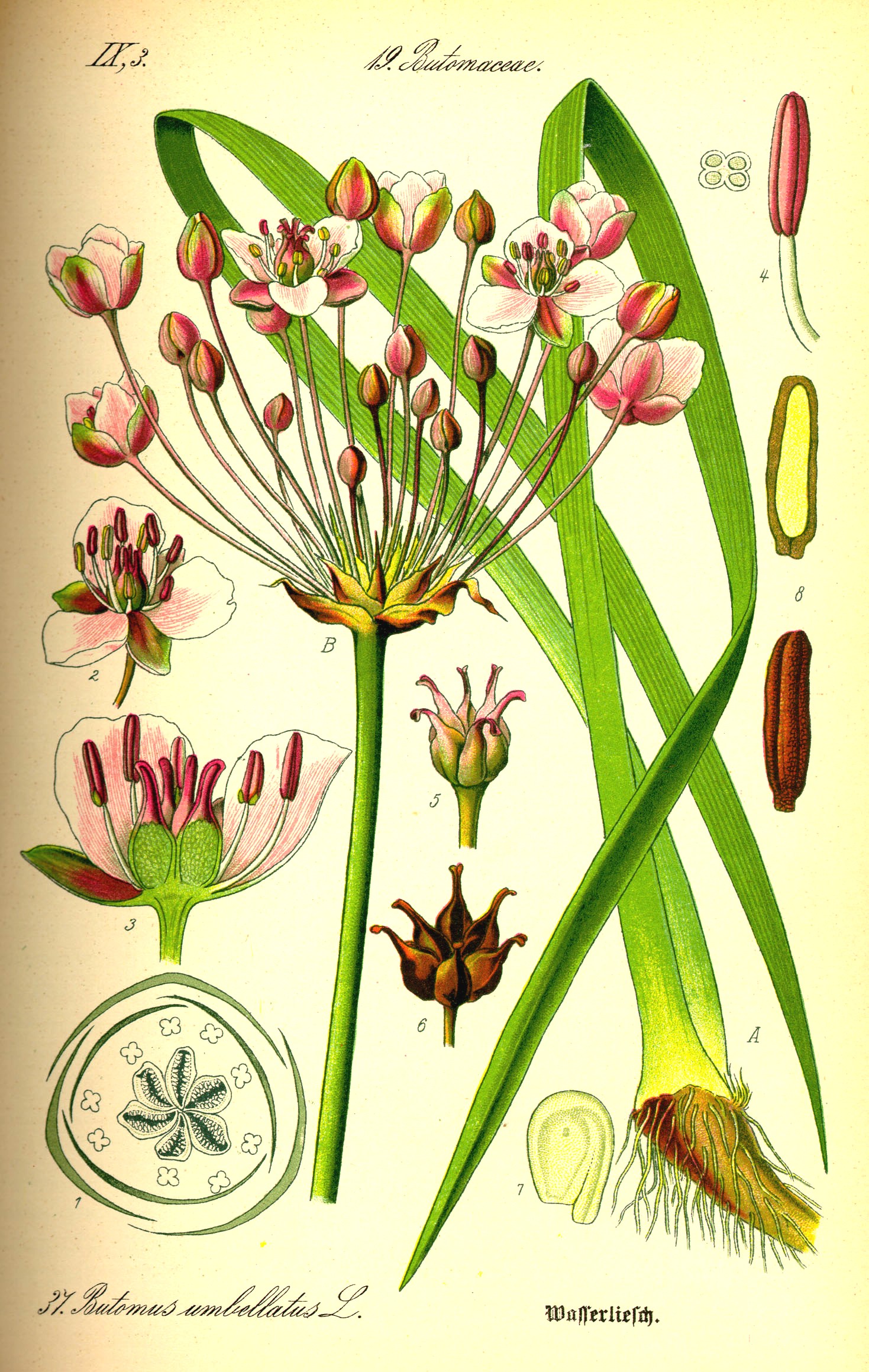 Description –
Butomus umbellatus is a perennial marsh grass, equipped with a rhizome, which grows between 50 and 150 cm, with the base of the plant often submerged, being the flowering rush able to root even under water.
The leaves have a different shape depending on whether they are submerged or floating (ribbon-like) or out of the water (triangular section).
The flowers are made up of 6 pink petals and are collected in an umbrella-like inflorescence.
The flowering period is: July – August.
The fruit is a follicle (aggregate of dry follicles). The follicles open along a dorsal or ventral suture. Each of the 6 follicles of 7-9 x 2-3.5 mm, obovoid, with hooked beak. when mature it releases numerous small oblong seeds of 0.2-0.4 mm, longitudinally striated.

Cultivation –
The Flowering rush is cultivated in marshes and areas rich in humidity.
It is a plant that resists very well even in cold temperatures.
It is an excellent plant for use in marshy areas, for ponds and bio-pools.

Uses and Traditions –
Butomus umbellatus is the only species of the genus Butomus.
The plants of the Butomaceae family, to which this species belongs, are distributed in various continents, almost always in tropical areas, as they are marsh or sub-palustrous plants, characterized by only basal leaves, with a bare stem without stipules and with particular fabrics aeriferi. The flowery rush, despite its name, does not belong to the genus of real rushes, it only shares its habitat and is united only by superficial similarities.
This plant is one of the most beautiful aquatic plants in all of Europe, which makes it preferred for plants inside ponds, as an ornamental plant.
The Butomus umbellatus is also a very interesting plant for phytodepuration plants in bio-swimming pools.
Unfortunately, the species is in strong regression following the mechanization of the cleaning of ditches and canals and the continuous use of herbicides used especially in rice fields, as it is considered a weed of these crops.

Method of Preparation –
Flowering rush has no particular applications for pharmaceutical or food use, although in some parts of Russia rhizomes are used as food, but it has an interesting use in phytodepuration plants or as an ornamental plant for ponds.