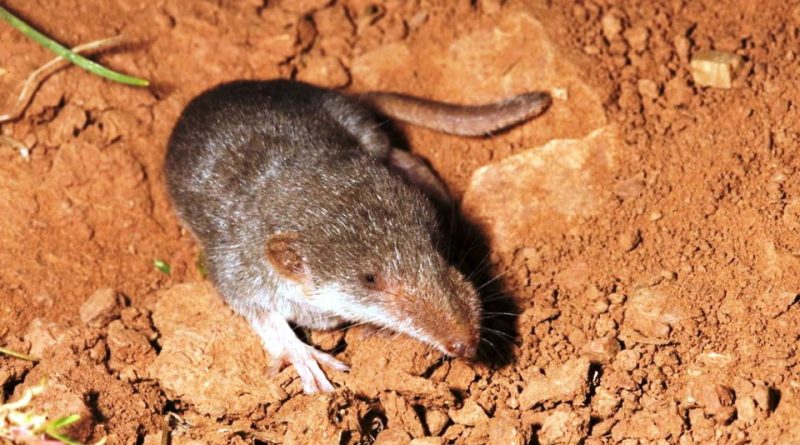 The Etruscan shrew (Suncus etruscus Savi, 1822) is a very small mammal belonging to the Soricidae family.

Systematic –
From a systematic point of view it belongs to the Eukaryota Domain, Animalia Kingdom, Phylum Chordata, Mammalia Class, Laurasiatheria Superorder, Soricomorpha Order, Soricidae Family, Subfamily Crocidurinae and therefore to the Genus Suncus and to the Species S. etruscus.

Geographical Distribution and Habitat –
Etruscan shrew is a widespread species in a range that goes from China, Pakistan and India, to Portugal and France to Morocco, Tunisia and Egypt. In Africa it goes down to Tanzania and Natal.
In the Mediterranean it is present in all the countries that gravitate around the sea.
In Italy it is present in almost all the peninsula with the exception of the Alpine reliefs; it is present both in the major islands as well as in some smaller islands (Asinara, Tavolara, Egadi, Pantelleria and Lampedusa). Furthermore, in Sardinia there is an endemic subspecies (Suncus etruscus pachyurus (Küster, 1835).
Its habitat is very varied and extensive and includes bushes, clusters of branches and leaves, edges of old walls, piles of stones, etc., provided that each refuge has the necessary heat to make it live. 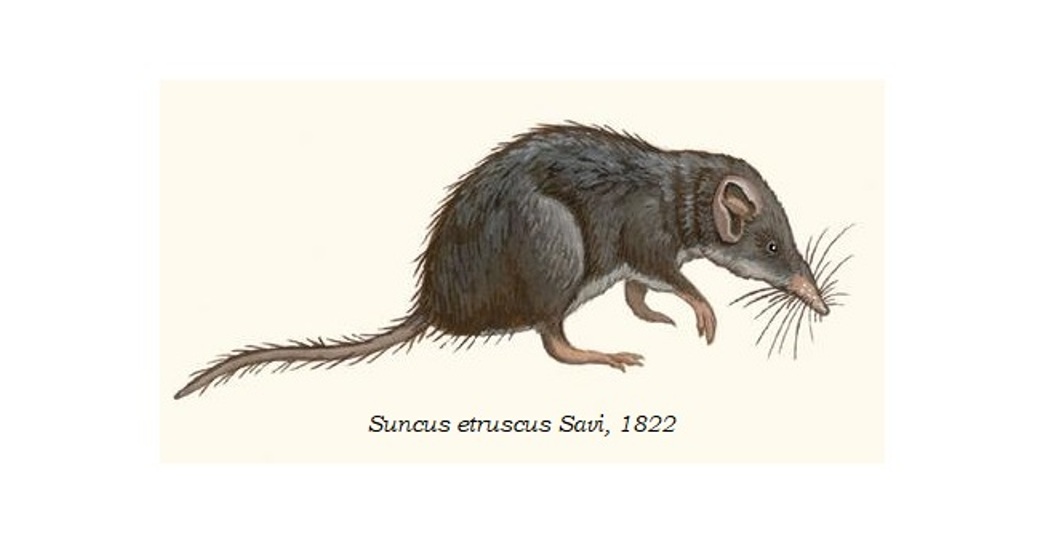 Description –
Mustiolo is the smallest mammal in the world by weight.
It is similar to other shrews, but it stands out for being much smaller and with short legs.
Its body is from 3.6 to 5.2 cm long, covered with a silky, very thin fur, between gray and reddish brown in color, with lighter shades under the belly than the back. It has very long tactile hairs, all over the body, far exceed the other fur hairs. The tail is 2.4 to 2.9 cm long, equally equipped with numerous hairs, very long.
The head is pointed, with very small eyes that sink into the fur.
The ears are large and clearly visible.
The muzzle is equipped with very long vibrissae.
The teeth of the mustiolo are of an intense white color.
The lines are squeak, hiss and screech.

Biology –
Suncus etruscus reaches sexual maturity in the year of birth (spring offspring) or the following year (summer offspring).
The first births occur in the period of May and are born until the beginning of October.
Males enter in rutting from the beginning of April, and then emit a strong musky smell, through the secretions of special glands located on the sides.
Gestation lasts 27-28 days, at the end of which the female gives birth to 2 to 5 babies, but normally between 3 and 4.
Among the young there is an equal number of males and females. In the first twelve days of gestation the female does not gain weight, which normally fluctuates between 2 and 2.2 grams. Then the weight increases and the female weighs 3.4 g, reaching 3.6 g around the twenty-fourth day. In only fifteen days, the animal has therefore increased its weight by 75%. The maximum weight reached by a pregnant woman is 3.62 g.
The newborn babies are entirely naked, with deep pink skin, full of wrinkles.
Their ears are closed, as are their eyelids. The eyes are seen, in transparency, as black dots. The toes are welded together. Even the legs give the impression of being attached to the body.
These very small animals, similar to larvae, at birth weigh from 0.18 to 0.27 g, while their length ranges from 14.2 to 15.4 mm; they grow very quickly. Around the thirteenth day they open their eyes and between the twentieth and twenty-second day they reach adulthood. It is then that they become independent of their parents. Their length varies from 42.3 to 43.9 mm.
This small animal has a life expectancy of around two years at most, with very rare exceptions that can exceed this period.

Ecological role –
Suncus etruscus has mainly nocturnal and solitary habits, with reduced activity in cold periods (partial lethargy).
Its feeding is mainly based on insects, but also spiders and small molluscs.
This pet detects prey 25–30 cm away, raising its head and waving its long mustache, before pouncing on the victim, biting it with incredible fury.
The Etruscan shrew feeds on the soft parts of the prey and leaves out the hard ones.
The prey is quickly consumed, then leaves the remains and sets off in search of a new victim. Reject fetid insects, such as bedbugs, and back off, after simulating the attack, when facing a prey that is too large for its size.
This animal is a good climber and is in any case practically invisible in its natural environment, on the one hand for its very small size, on the other for its very discreet and partially nocturnal habits.
Etruscan shrews are bred in terrariums, whose soil is covered with earth. It is advisable to prepare a plaster nest, consisting of a labyrinth of corridors which lead into a central bedroom.
It should be remembered that Suncus etruscus is a protected species pursuant to Law 11/02/1992, n. 157 and protected by the Bern Convention.
However, the IUCN Red List classifies this species as being at low risk of extinction.