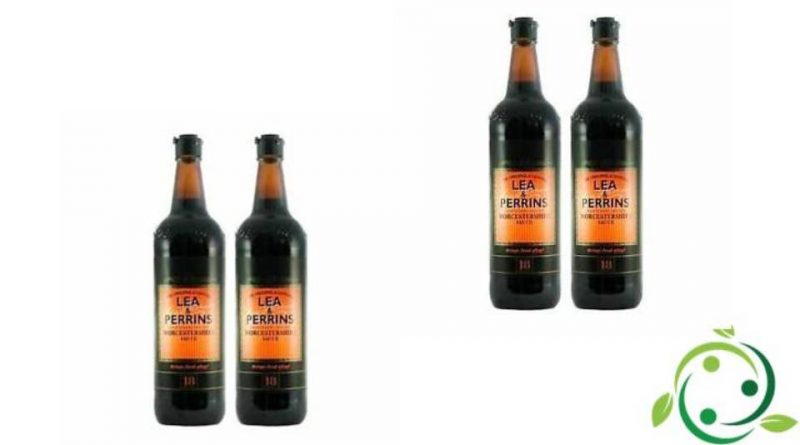 Worcester sauce or, more extensively, Worcestershire sauce, is a bittersweet and slightly spicy English sauce, which takes its name from the homonymous English county of Worcestershire.

Origins and History –
Worcester sauce was born in 1835 at the request of a former English governor, a certain Lord Sandys, who had lived in Bengal. He commissioned two pharmacists (John Wheeley Lea and William Perrins) to reproduce an Indian sauce.
The two pharmacists tried to prepare, imitating the Indian sauce, they put it in a barrel but the immediate result was disastrous and the barrel forgotten in the cellar. A few years passed before the two took the barrel from the cellar, realizing with great surprise, that the sauce had become delicious. It was thus that they founded a company, Lea & Perrins, dedicated to the production of this product, still active, which had become the property of the Heinz group since 2005.
Between legend and history, however, there is a court sentence. In fact later it would have emerged that the phantom Lord Sandys had never really existed and that sauces similar to that created by the two pharmacists had been around for some time now. For this reason, in 1875 a High Court ruled that Lea & Perrins could not acquire the Worcester Sause trademark. And that’s why there are so many companies producing it today.
Over the years, the Worcester sauce has changed its taste and combinations. From fish dishes, such as Worcester Lamprey, it has gone on to season mainly red meats until it has also become a basic ingredient for an American cocktail, Bloody Mary. And from an excessively pungent taste, so as to make the eyes water, he acquired a more moderate one. Today its characteristic dark red color retains a mixture of flavors and aromas ranging from salty to sweet and from spicy to fruity.
But if no one talks about its presumed digestive powers, so acclaimed at the outset, its ability to expand the gradations of taste remains highly appreciated. This is because it acts as an ingredient to create other barbecue sauces. It is not for nothing that steak sause are often rich in worcestershire sauce and in English-speaking countries it is also widely used to season steaks, while in Italy its use is less frequent.
To make the Worcester sauce, the original recipe is still used today with a three-year aging in cask.
The basic ingredients with which the Worcester sauce is made are:
– onions;
– garlic;
– anchovies;
– Dutch shallot;
– herbs.
Malt vinegar, cloves, red chilli pepper, sugar cane molasses and tamarind are added to these products.
As mentioned, this particular sauce is used to enrich meat, fish, soups, sauces and for the preparation of some cocktails, including the famous Bloody Mary, based on tomato juice and vodka. It is also an ingredient for other sauces, such as Canadian seared, tuna cream, French mayonnaise and pink sauce.

Description –
Worcester sauce has an intense brown color and a liquid consistency. It is a sweet and sour sauce, slightly spicy and strongly spiced, which is why it goes well with those dishes that need a touch of pungent and strong flavor. It goes particularly well with burgers and beef, vegetables, especially tomatoes and peanut and pumpkin soups.

Active principles –
From a nutritional point of view, Worcester sauce has few calories and for this reason it can be used in a healthy and balanced diet, but also for weight loss.
It contains various mineral salts, including potassium, iron and calcium, but it is not recommended for those suffering from high blood pressure, since it is high in sodium.

Properties and Uses –
The Worcester sauce is suitable for meats, sauces, soups and is one of the fundamental ingredients for some cocktails such as Bloody Mary and Bull Shot.
To be sure of tasting the original Worcester sauce one should check that it is produced by Lea & Perrins, since there are many imitation products on the market. After opening the small transparent bottle, the sauce can be stored in the refrigerator.
In addition, there are also versions without anchovies for vegans or with a negligible fish content, suitable instead for Orthodox Jews who avoid mixing fish with meat.
In the United States, Worcester sauce bottles are still wrapped in a protective paper. Vestiges of how goods once traveled by sea. But wherever they are traded, the bottles always have the same elongated neck. Fantastic to grab them, shake them well before use and then pour their contents onto our plates.
Especially on the steak, the course that in its many forms, is better combined with the Worcester sauce. Without wanting to downsize, however, the Japanese pork cutlets sprinkled with its variant, the Tonkatsu. In Britain, smaller cuts of meat are also used. For example, rabbit or beef strips.
But generally any dish, if made on the grill, can be enhanced with this dressing. So put in the list well: soups, eggs, shrimps, oysters and various appetizers. And if the fridge is really empty, fill a spoonful with the fine English sauce and put it down. It will be the beginning of a new sensory odyssey.

Preparations –
The Worcester sauce, from its creation to today, has not seen its recipe changed.
The sauce is aged for three years in wooden barrels, and among the ingredients, to obtain the most original version possible, there are British onions, French garlic, Spanish salted anchovies (draining), Dutch shallots and aromatic herbs. After aging, malt vinegar, Calcutta tamarind, Madagascar cloves, China red pepper and Caribbean sugar cane molasses are added.