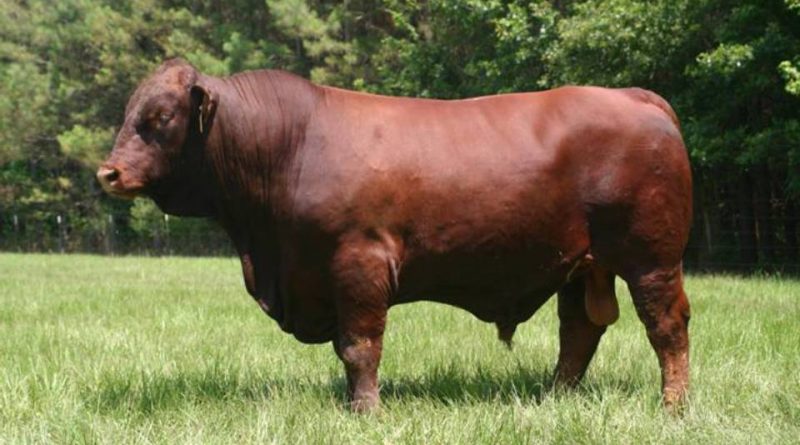 Santa Gertrudis is a bovine breed (Bos taurus Linnaeus, 1758) bred in America with an aptitude for meat production.

Geographical and Area Distribution –
The Santa Gertrudis breed of cattle has a rather vast geographical distribution as they are bred mainly in Texas but are also present in other States of the USA, in South America, in Africa, in some Eastern European countries and in Australia.

Origins and History –
The Santa Gertrudis is the most important breed among those of indica origin.
This breed was created in America in the early 1900s using 3/8 of Brahman blood and 5/8 of Shorton blood. Its recognition as a pure breed, thanks to the United States Department of Agriculture, took place in 1940.
It was created by pairing Brahman bulls with Shorthorn cows, with a final composition, as mentioned, of about three eighth Brahman and five eighth Shorthorn.
The origin of this breed began in 1918 when the King Ranch purchased 52 bulls that had blood characteristics of three quarters to seven eighths of Bos indicus and which were mated with 2500 purebred Shorthorn cows.
It is recalled that at that time, the American Brahman breed, as such, did not exist, nor were other Bos indicus cattle available in the United States.
In 1950 the Santa Gertrudis International Breeders Association was founded in Kingsville, Texas.
Subsequently, in 1951, these cattle were exported to Australia and have since undergone inspection and classification. The Santa Gertrudis Breeders Association (Australia) was founded in 1954 and the Santa Gertrudis Breedplan group has been operating in Australia since 1994. Anna Creek, which is Australia’s largest livestock station, raises cattle of the Santa Gertrudis breed.

Morphology –
The Santa Gertrudis is a bovine breed with a uniform dark cherry red coat, although sometimes white marks may be present, with short and smooth hair; these are very massive animals and have intermediate characteristics between Bos indicus and Bos taurus.
This breed shows many of the characteristics of the Bos indicus: the skin is loose and with folds in the neck and navel; the male has a small Zebu-type hump. The ears are medium to large.
The muzzle is flesh-red in color.
The horns are short but can also be absent.

Productive attitude –
The Santa Gertrudis is a breed with excellent conformation for the production of meat, with high yields at the slaughterhouse, and very suitable for grazing; it is also very resistant to adversity and parasites.
The female is known for her ease of birth, excellent maternal and milking ability, while her milk is more than enough for the calf.
Cattle of the Santa Gertrudis breed are also known worldwide for their ability to adapt to harsh climates but show a high heat tolerance and resistance to parasites.