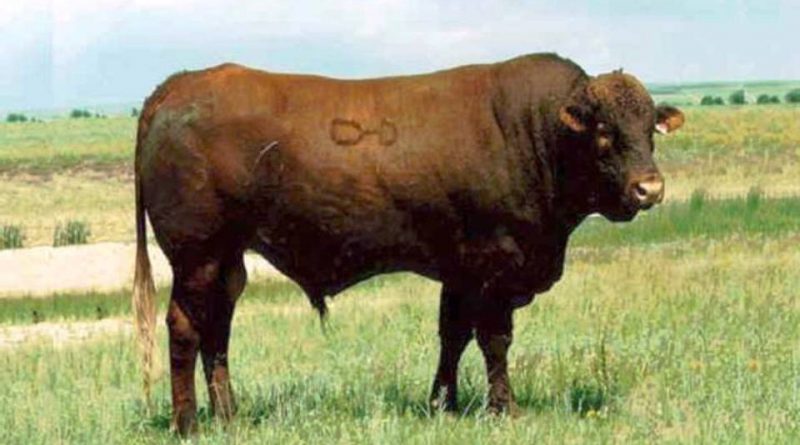 The Salorn is a mixed breed of cattle (Bos taurus Linnaeus, 1758) from the United States with an aptitude for meat production.

Geographical and Area Distribution –
The Salorn is a bovine breed, rather recent and with diffusion in the United States that has great potential and rusticity to spread in most of the countries where zotecnia is practiced.

Origins and History –
The Salorn is a bovine breed of Taurine mestizo origin of Salers breed animals on Texas Longhorn breed animals.
The Salorn breed is a newly developed breed consisting of 5/8 French Salers and 3/8 Texas Longhorn blood. This genetic combination wanted to use the most adaptable breed of cattle in America, which the Texas Longhorn, with the most proven carcass quality breed, which is the Salers.
The Salorn creation program began using females from the Texas Longhorn breed who are registered and with more adaptable genetic traits. These were paired with muscular Salers, with good vigor and a smooth top coating. The resulting F1 legenerations (i.e. 1/2 Salers + 1/2 Longhorn) were bred at ¾ of Salers and ¼ of Longhorn to produce a 5/8 – 3/8 combination, which are the first generation Salorn. The successive generations, that is, 5/8 – 3/8 of Salorn are the ones that then ensure the maintenance of the characters and the reproductive coherence.
This breed is the result of studies carried out by Prof. Bonsma who declared: “I am convinced that if the work of creating the Salorn breed will be done with precision, the Salorn breed will, in the long term, the breed be far superior to any of breeds created in America ”.
This is also because the tropical adaptability, resistance to parasites, longevity, ease of birth, maternal ability, the use of pastures, fertility and resistance to diseases, of the two breeds of origin, were, according to Prof, undoubtedly superior to any other breed. Salers and Longhorns were born in almost the same areas of the world, before coming to America, and share many important traits among them. In addition, Salers has an enormous growth capacity combined with ease of delivery and, as mentioned, superior carcass quality.

Morphology –
The Salorn is a bovine breed that is recognized for having a height at the withers that varies between 130 and 150 cm.
The coat has an intense mahogany red color.
The muzzle is generally pigmented.
They are also acorns.

Productive attitude –
The Salorn breed was specifically created to have great resistance in many different environments and to have excellent carcass qualities, rapid growth and good quality of meat.
Despite their yields and characteristics, they are extremely rustic and frugal animals.
The productive attitude is obviously that of meat.