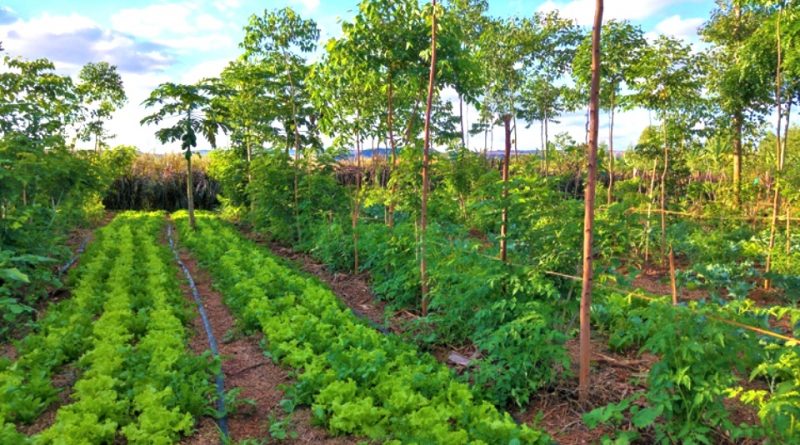 How to Design the Agroecological Company

Agriculture and Nature can I live together?
Absolutely yes, indeed the ecological restoration of the future passes, in large part, from this combination: agricultural activity synchronous with the ecological system.
To do this, the first step is to study the habitat where the future farm is located. Obviously if they are in the presence of uncultivated ancient rural settlement the process is faster. If we are in the presence of a company, with pre-existing production orders, the path becomes longer and more complex because in most of the cases the existing production orders were hardly made thinking of the “coexistence” criterion. Together with the study of the habitat it will then be necessary, and in complementary succession, to design the Agro-ecological, Agroforestry and finally, but not least, the Agri-food system for which our products and services are intended.
Habitat Study:
– We said that the first step is to study the habitat in which the future farm will fit. The study of the habitat is in fact preparatory to understand which cultivation order to settle, taking into account to maintain or restore the necessary biodiversity, inserting native species and breeds, not disturbing the existing fauna or even facilitating it and, where necessary, creating restore spaces for shelters, breeding places, etc. This criterion is fundamental to allow an optimal balance of all biocoenoses, thus avoiding the use of biocides to “artfully” adjust balances that cannot be reached with these systems.
Agroecological Order Planning:
– The agro-ecological system must take into account, on the one hand, the species and breeds possible in that particular habitat but also, as we will see later, the final destination reference, i.e. the agri-food system to which our products must be destined. However, let’s start with the construction of the agro-ecological system. The first aspect to be examined is that of biological diversity which, as is now known, is a fundamental resource for achieving the balance of the habitat and therefore, ultimately of the human species, on a par with water and energy resources. Among other things, the maintenance of high biodiversity is the basis of those companies that must, among other things, be certified as organic agriculture, which bases its own principles on the restoration or creation of the ecosystem, that is, of an environment characterized by the close coexistence between numerous plant and animal species linked together by a relationship of mutual control and mutual exchange. At this point, once the correct agroecological system has been identified, it is necessary to move on to the correct application of the cultivation techniques, which, even if not certified as organic, represent in themselves a tool for the conservation of biodiversity and therefore respect for the needs of the habitat. It will also be necessary to make use of all those agronomic practices that intervene on water resources, soil fertility, weed management and pest control in order to help increase the microflora and microfauna of the soil. To implement this, some simple guidelines will have to be followed.
1) Reduction of the size of the fields in order to facilitate the connection between cultivated fields and areas of refuge. For many animal species, obtaining food through too large cultivated areas becomes risky. In fact, the presence of hedges, wetlands, rows and other interruptions constitute areas of refuge and reproduction for many wild animals.
2) Use of the greatest possible number of species and cultivated varieties;
3) Maintenance, especially in the winter season, of plant biomass residues in the soil at rest;
4) Distancing of crops of the same type (same variety, species, etc.) to reduce genetic uniformity and consequently obtain greater control of pests and weeds;
5) Increased rotation time (use of multi-year rotations);
6) Limited use of plant protection products (which in an agroecological system can decrease even 10 times) allowed and use of the biological control for the control of phytophages.

7) ecological integration must then provide a well-structured refuge area with several layers of plants of varying consistency, a layer of bare soil left uncultivated and environments where it is possible to shelter and reproduce various animal species, such as heaps of stones and stacks of wood. Ultimately, the greater the number of plant species that make up the area of ​​refuge, the greater the number of animal species that will inhabit it, especially if we try to establish environments where their shelter, wintering and reproduction are possible. . In fact, the fauna of the refuge areas and cultivated areas has different habitat needs for nesting and reproduction and different food needs. It should be noted that it is not essential to associate many species in a refuge area, especially if you are dealing with small areas. It would be more appropriate to set up small areas of refuge characterized by a few species, each of which can perform a specific function based on the needs of the farmer, and perhaps include more diversified areas of refuge within the company.
Agroforestry Order Planning:
– Agroforestry (a term that derives from the English word agroforestry) indicates a promiscuous agricultural system that provides for the combination of trees and / or shrubs and the like, managed rationally with the agricultural crop or with the zootechnical activity of reference in the farm plot and with the aim of not neglecting the production aspect but also of acting, where possible, as an additional buffer or buffer system in balance with the reference habitat. Obviously, different combinations must be created between trees, arable land and farms which, however, will be provided by the preliminary study of the habitat. Ultimately, the goal of agroforestry, within agro-ecological systems, consists of management based on ecological systems and the sustainable use of natural resources that through the integration of trees in the agricultural system diversifies and supports production to increase the social, economic and environmental benefits of land use at all levels. In fact, therefore, the agroforestry systems are characterized by ecological and economic interactions between woody trees, crops and livestock.
Agri-food system:
– The agri-food system is another of the weaknesses of the current agri-food chain. The presence of large urban agglomerations, the distance between places of production and use, the flattening of diets, based on few foods (think that 88% of the world food is based only on 8 foods (Rice, wheat, corn , soybeans, etc.) create market dominance that every single company cannot counter or determine. In this sense, a growing relationship of loyalty between companies and final use combined with the construction of a network, even between small companies of the the same area, to increase the supply basket (and at the same time biodiversity) and to relate to short-range agri-food systems. We remember that a large part of global warming is due to the emissions linked to the long distances that the transport systems must support. the agri-food question does not end here, however. As mentioned, we must work on an education for more “biodiverse” consumption which, in fact, makes peace with the excess of the ecosystem and with those of a richer, seasonal and therefore healthier diet. In this sense, farms, or rather their networks, will have to create, increasingly in the future, education networks for a healthy and rich diet without which the agro-ecological principles will find great difficulties of application. In summary, it will be necessary to move from the current 8 species that feed 88% of the world population to about 200, with another 30,000 species (FAO data) to be included in the production orders of the various world companies in balance with their respective habitats.
The entire production model proposed has a system efficiency * equal to 10 times higher than those defined as “conventional” or intensive, ie with the use of synthetic chemistry, biocides, etc., as it uses the so-called “thermodynamic cycle” closed ”instead of the“ open ”one of intensive agriculture.
Obviously as a corollary of this new way of conceiving a “company”, that is the Agroecological one, it is also necessary to implement Plastic Free and Energy Free principles, which are discussed elsewhere.
Finally, it is correct to specify that the complexity of this design model must be entrusted to Agronomist or Forestry Doctors, preferably in a group, with particular specialization not only in agronomic subjects but also in ecological, thermodynamic and complex systems matters.

* in Agroecology the unitary yield is not used which, in the long run in the complex system of production systems combined with those of the markets tends to flatten production yields and market prices – see, among others, data on wheat in conventional production.