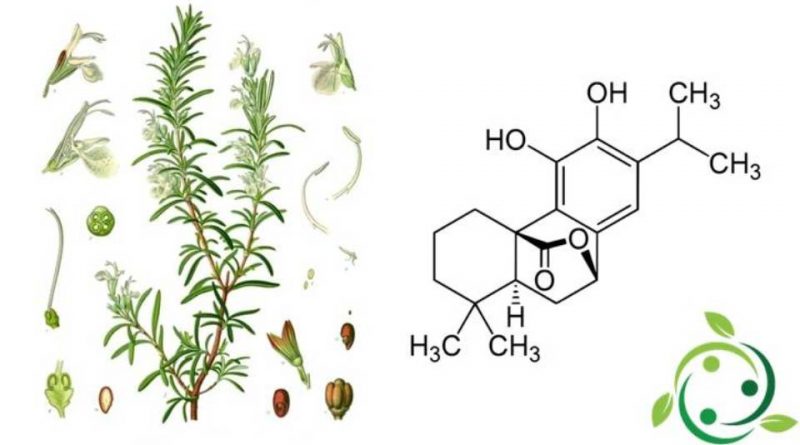 Carnosol, whose brute or molecular formula is: C20H26O4 is a phenolic diterpene present especially in rosemary (Rosmarinus officinalis L., 1753) and in a species of sage (Salvia pachyphylla Epling ex Munz).
Carnosol is particularly studied in vitro for the anti-cancer effects in various types of cancer cells.
Among others, research by the University of Pisa has revealed the anticancer properties of rosemary. The study, funded under research projects and conducted by researchers from the Pharmacy department, has just been published in the scientific journal “The International Journal of Biochemistry & Cell Biology”.
The study shows the properties of rosemary, also linked to the content of carnosol which can be used as adjuvants in traditional anti-cancer therapies.

Carnosol is, among other things, present in various spices of the Mediterranean diet, such as, as mentioned, rosemary and sage, which in fact acts by reactivating the protein p53, a tumor suppressor considered one of the most important factors for the control of development and disease progression which is inactive in 50% of human cancers.
For this reason, research is increasingly turning to compounds of natural origin capable of stopping the development of tumors, above all because some studies have already shown the beneficial activities of rosemary and its components.
However, research by the University of Pisa has been able to verify the effects of these compounds on cancer cells in the culture of glioblastoma multiforme, among the most aggressive brain tumors and with an average survival of the lowest. It is therefore a discovery that can open up the study of molecules with an important and concrete impact at the nutraceutical and pharmaceutical level.