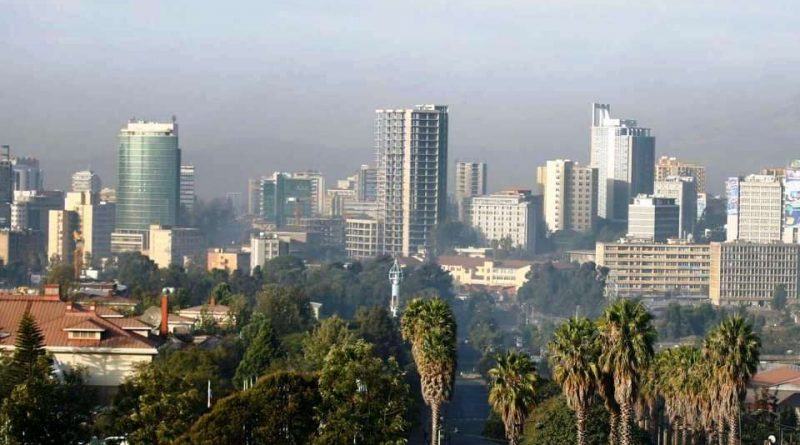 Ethiopia which is officially called the Federal Democratic Republic of Ethiopia is an East African state located in the Horn of Africa.
This landlocked state occupies a total area of ​​1,126,829 square kilometers but with a low population density and a total population of 102.3 million inhabitants.
The capital of Ethiopia is Addis Ababa.
Ethiopia is bordered by Eritrea to the north, Djibouti and Somaliland to the north, Somalia to the east, Sudan and South Sudan to the west and Kenya to the south.
Ethiopia is located between latitudes of 3 ° and 15 ° N, and longitudes 33 ° and 48 ° E. Most of the Ethiopian nation is located on the Horn of Africa, the easternmost part of the African continent.
Inside the country there is a vast and complex plateau of mountains and plateaus separated by the Great Rift Valley, a valley that extends to the north-east surrounded by plains, steppes, or semi-desert. The great orographic variety determines wide climatic excursions, soil, natural vegetation, and settlement patterns.
From a political point of view it is a federal parliamentary republic, in which the prime minister is head of government. Executive power is exercised by the government, while federal power and legislative power are exercised by both the government and the two chambers of parliament. Based on article 78 of the 1994 Ethiopian Constitution, the judiciary is completely independent of executive and legislative power. The Ethiopian government is organized on several levels and is made up of a federal government made up of states based on regional ethnicity, zones, districts (woreda) and neighborhoods (kebele).
From an international point of view, Ethiopia has been part of the Intergovernmental Authority for Development since 1986, a political-commercial organization formed by the countries of the Horn of Africa. In June 1994, the election of the Ethiopian constituent assembly took place, which had 549 members. This assembly approved the establishment of the Federal Democratic Republic of Ethiopia in December 1994. The first democratic elections were held in June 1995 for the election of the national Ethiopian parliament and various regional parliaments.
Ethiopia’s climate is basically monsoon tropical. The Ethiopian highlands cover most of the country and have a generally much cooler climate than other equatorial regions. Most of the country’s main cities are located at altitudes between 2,000 and 2,500 m above sea level, including historical capitals such as Gondar and Axum.
The capital Addis Ababa is located at the foot of Mount Entoto, at an altitude of around 2,400 meters, and therefore with a mild climate throughout the year. The seasons in the capital Addis Ababa are largely characterized by rains, with a dry season, from October to February, a rainy season, from March to May, and a heavy rain season, from June to September. The average annual rainfall is about 1,200 mm, while on average there are 7 hours of sunshine per day. The dry season is the sunniest time of the year, although it is possible to have some sunny days even at the height of the rainy season in July and August. The average annual temperature of Addis Ababa is 16 ° C, with maximum daily temperatures reaching on average 20-25 ° C all year round, with average night minimum between 5 and 10 ° C. Most cities and tourist sites in the Ethiopian nation are located at a similar altitude in Addis Ababa. In the lower regions, in the eastern part of the country, there are both xerophyte grasslands and shrubs, while the climate can be much warmer and drier. In Dallol, in the Danakil depression, the world’s highest annual average temperature of 34 ° C was recorded.
Ethiopia is a country with a great biodiversity: from deserts along the eastern border, to tropical forests in the south, to large areas of Africa, in the northern and southwestern parts. Lake Tana in the north is the source of the Blue Nile. In this region there are a large number of endemic species, in particular the Gelada, the Walia Ibex and the Ethiopian wolf. The presence of vast territories located at different altitudes sees the formation of ecologically distinct areas, contributing to favoring the evolution of endemic species in ecological isolation.
To protect this great biodiversity heritage, unfortunately in decline, nine national parks have been established, as well as some protected areas. National Parks up to the following:
– Abiata-Sciala National Park, located near the Abiata (or Abijatta) and Sciala (or Shalla) lakes;
– Auasc National Park, limited to the south by the Auasc River;
– Bale Mountains National Park, along the highest mountain range in southeastern Ethiopia;
– Gambela national park;
– Mago National Park, straddling the Mago River, a tributary of the Omo;
– Nechisar National Park, bathed by the lakes of Abaja (or Margherita) and Ciamò (or Ruspoli);
– Omo National Park, one of the largest, is located in the valley of the Omo river and borders the Mago National Park;
– Semien National Park, which includes Ethiopia’s highest peak, the 4620m Ras Dejen. It hosts numerous endemic species;
– Yangudi Rassa National Park, in the Afar region.
To these must be added other types of protected areas at national level: natural sanctuaries, forests, reserves, controlled hunting areas, etc.
At present, a 17-year civil war and severe drought have adversely affected Ethiopian environmental conditions, leading to greater habitat degradation. Their destruction is the main factor in the desertification process. When a habitat is rapidly transformed, animals do not have time to adapt. The impact of man threatens many species, as a result of climate change induced by greenhouse gas emissions.
With carbon dioxide emissions in 2010 of 6,494,000 tons, Ethiopia contributes only 0.02% to the annual anthropogenic release of greenhouse gases. Threatened species in Ethiopia can be divided into three categories (based on the IUCN survey): critically endangered, endangered and vulnerable. 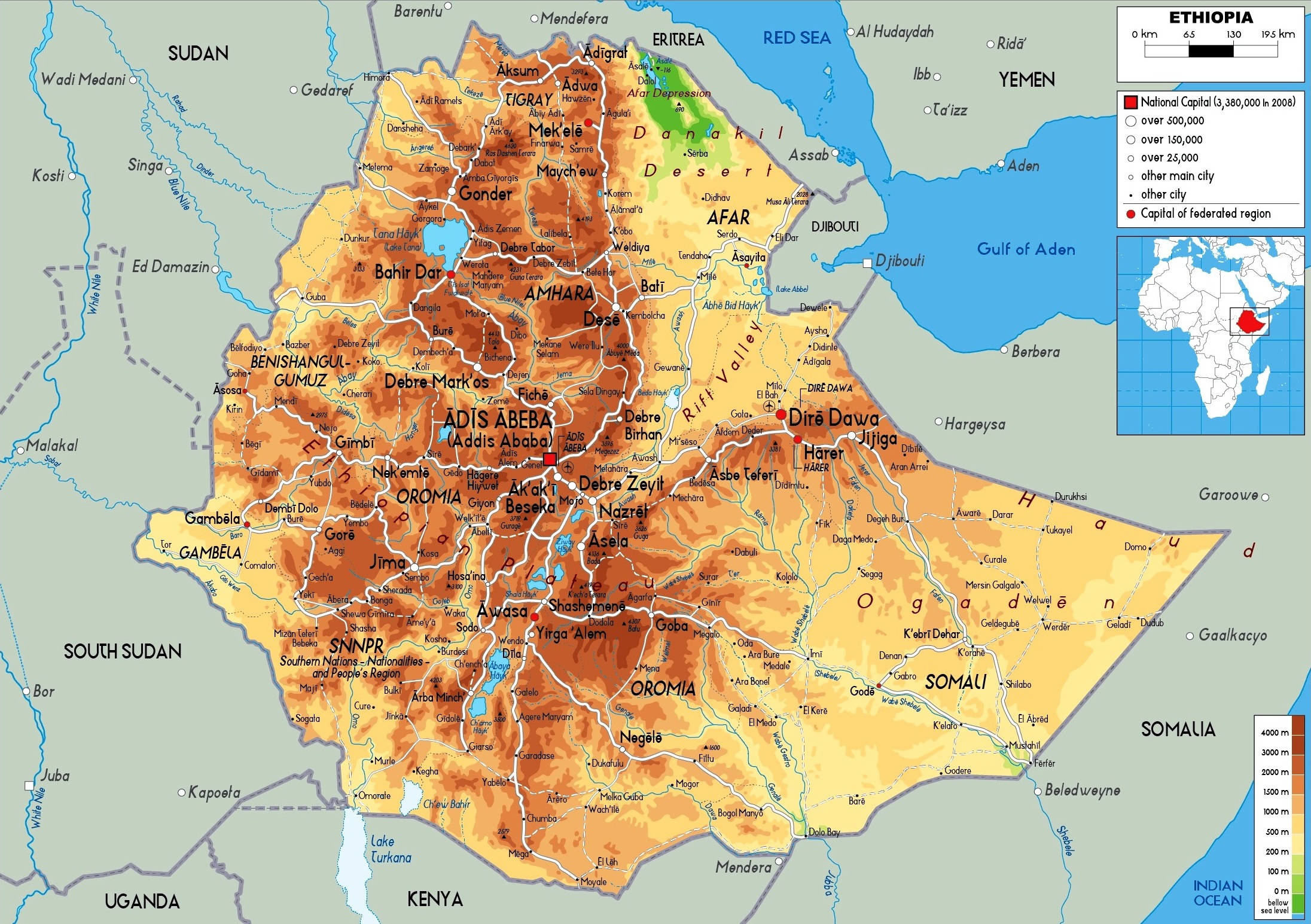 Fauna –
Ethiopia has 31 endemic mammal species. The African wild dog since prehistoric times has had a widespread distribution on its territory. However, with the latest sightings in Fincha, this canid in Ethiopia is facing extinction. The Ethiopian wolf is perhaps the most sought after of all the endangered species in the country. Ethiopia is a global center of volatile biodiversity. To date, more than 856 bird species have been identified and registered, 20 of which are endemic to the country. Sixteen species are endangered or seriously endangered. A large number of these birds feed on butterflies, such as the Anynana bicyclus.
The fauna varies, obviously, with changes in the climate, the territory or the presence or absence of water. In the savannah, for example, we find the dik dik, a small antelope, or the oryx, the gazelle and the ostrich. In the Rift Valley and going south of the country instead, we can find zebras, antelopes, wildebeests, buffaloes, elephants, warthogs, lions, leopards, hyenas and jackals. Between the plateau, the lowlands and the savannah, Ethiopia has the largest number of animal species in Africa, although often this does not catch the eye so easily. Just think of the countless species of birds and aquatic animals present in what is the territory with the most water on the continent, thanks to its lakes and countless rivers. Easy to find in these latter places is the pelican and the wonderful flamingos.
Historically, throughout the African continent, however, wildlife has been rapidly declining due to civil wars, pollution, poaching and other human interference.

Flora –
The flora in Ethiopia is somewhat vast and complex. The vegetation here varies from the forest, to the savannah to the typical desert species, all this is due to the differences in altitude and latitude. In the area we say lower between 600 and 1800 meters, the vegetation is endowed with acacias, also endemic euphorbias that reach 10 meters in height and finally the baobabs. The Baobab is a millennial tree of immense size, whose fruit is very good and nutritious and from which a very thirst-quenching drink can be obtained, and from the seeds instead a particular oil is obtained. The African legend says that due to its beauty and majesty the baobab was once very vain and God to punish him turned him upside down punishing him, and this is the reason why the crown of the baobab resembles tree roots. In Danakil and Ogaden (part bordering Somalia) the setting is desert-like while in the south-west there are ficus, tamarind and endemic ensete the false banana, and finally wild coffee. In the long and sunny savannas of the south the desert rose also grows, a plant with small pink flowers and with a highly toxic juice that is also used as a poison. The highest area called dega, between 1800 and 2500 meters, whose name derives from the vine that is grown there; it is also composed of acacias, euphorbias, juniper, podocarp and aloe. Aloe is also used as a medicinal plant for the most varied inflammatory diseases. In the Bale mountains above 4000 meters we find it giant lobelia, plant with a stem over two meters with beautiful and long leaves. The eucalyptus that in the Ethiopian plateau is found in many parts, was introduced from Australia, to cope with the progressive deforestation caused largely by man. The savannah instead has a typical vegetation of the place itself and represents an incredible and absolutely unique spectacle. It can be a simple but entrancing expanse almost a sea of ​​grass, bushes, or bush or trees. Inside there are the most varied species of plants with the most varied breeds of birds that go to nest inside them.