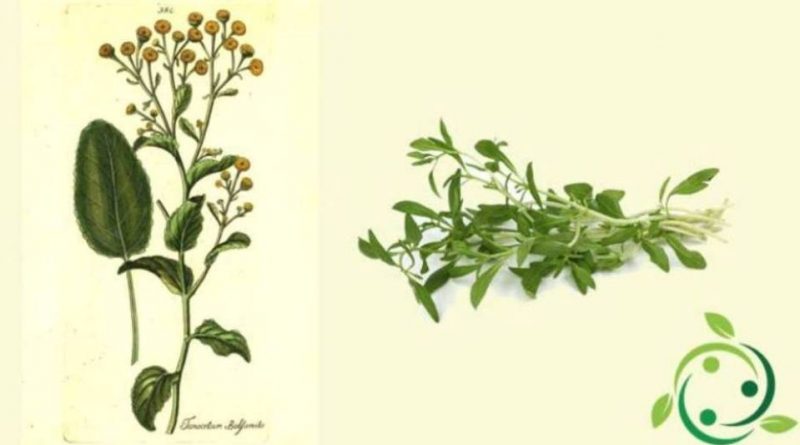 Costmary (Tanacetum balsamita L.) is a plant from the Asteraceae family grown as an aromatic herb in vegetable gardens.

Origins and History –
Costmary is native to western Asia and the Caucasus. It lives in temperate regions and has therefore perfectly adapted to Europe, North Africa and North America.
Flowering usually occurs in the summer season; tradition has it that it will bloom on June 29, the day dedicated to St. Peter, hence its name.
This herb is known, in the various regions of Italy, with many local names: Roman mint, bitter herb, good herb, madonna herb, santa maria herb, fritola, cost, or Greek mint.
St. Peter’s herb is also called “Bible herb”.
For centuries it has been cultivated for its pleasant scent (hence the name, from the Greek bàlsamon), as well as for its medicinal properties. The origin of the balm is oriental: it was known to the Egyptians, Greeks and Romans (who probably brought it to England). Culpeper, 16th century herbalist, defines it as “common”. The colonists brought it to America, where it currently grows spontaneously on the roadside in the eastern and middle eastern states. In ancient times, its flowers were also used as a bookmark in bibles (hence its common name of Grass of the Bible).
Already in the Middle Ages, St. Peter’s herb was used to treat certain pathologies such as: bronchitis, colic, gastrointestinal disorders.
San Pietro grass is ideal in soups, fillings or to flavor fish and meats to which it gives a particular flavor, similar to that of mint but slightly bitter. The plant is lush all year round but, despite its versatility in the kitchen, it certainly remains in a secluded position among all the aromatic herbs. In fact, not everyone knows its characteristics, the correct doses and the dishes to combine it with.

Description –
Costmary is a rhizomatous plant with erect and branched stems, up to 120 cm tall. It has simple, alternate and leathery leaves, ovate-oblong, toothed at the edges and pale green in color; the upper ones are sessile, the lower ones petiolate.
If rubbed, the leaves give off a smell like mint (thanks to the essential oil they contain).
The golden yellow flowers are gathered in flower heads, which present only internal tubular flowers, with a large shade of yellow, but mostly pale. The flower heads may have white external ligulate flowers, if the plant grows in full sun; visibly similar to daisies.

Active principles –
The Costmary includes, among its active principles, mainly contained in the leaves and in the flowering tops are: a volatile essential oil, bitter principles, tannins and sesquiterpene lactones.

Properties and Uses –
This plant has been used for some time as a substitute for tea and includes many therapeutic features: it is a very good digestive, it can counteract symptoms of aerophagia and meteorism, vomiting, pain in the intestine, bronchitis, colds. If you notice the little bile secretion, Costmary manages to reactivate the normal functions of the liver and gallbladder. It has the ability to medicate and disinfect small burns, burns, wounds, chafing, insect bites. It can also act as a natural cicatrizant against ulcers, giradito, dental abscesses and dermatitis. It also contributes to the escape of foreign bodies (splinters, filaments, etc.) from the skin thanks to the presence of many essential oils
The leaves, which represent the drug, are preferably harvested before flowering and used fresh. I can also be frozen in closed bags.
In the kitchen it is used in moderation (for the bitter taste) to give aroma to omelettes, fillings, poultry dishes, vegetable pies.
Its herbal is instead for its antispasmodic, carminative, diuretic, emmenagogic properties.

Preparations –
In the kitchen its leaves are used for sauces, fillings, omelettes, game, to which it gives a flavor similar to that of mint, but tending to bitter. It is an ingredient in the filling of the bitter Tortello di Castel Goffredo, a traditional agri-food product from the Lombardy region. As mentioned, for all uses, the leaves are usually harvested before flowering and then used fresh, or they can be frozen and used later.
For its therapeutic properties, it works to prepare herbal teas and ointments. Furthermore, placed inside the drawers, it perfumes them and keeps insects away.