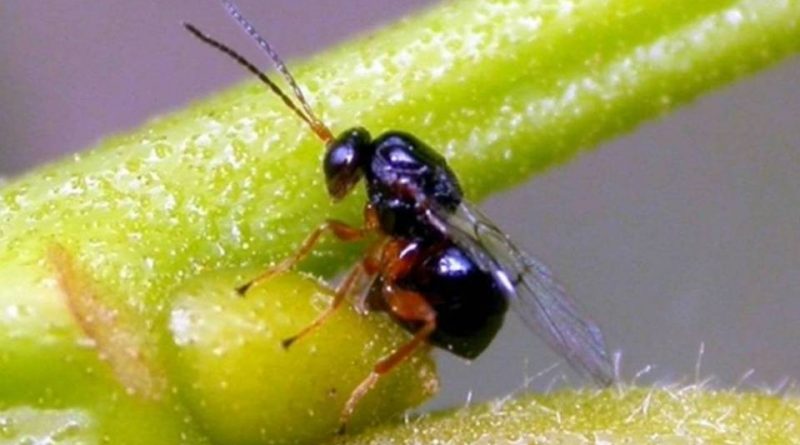 Geographical Distribution and Habitat –
Dryocosmus kuriphilus is a phytophagous insect originating in China, introduced in Japan and Korea and later in the USA. Its initial spread of this insect has been very rapid due to the absence of natural enemies capable of containing its spread.
It arrived in Europe in 2002 and is present in France, Slovenia and Switzerland; the first sightings in Italy occurred in the province of Cuneo and then spread elsewhere in 15 of the 20 Italian regions.
In 2009 it was still absent only in the Aosta Valley, Basilicata, Molise, Sicily, Puglia and Calabria.
In 2011 it was present massively in Liguria and in 2016 in Campania (province of Avellino and Salerno), after previously it had been possible to limit its diffusion. 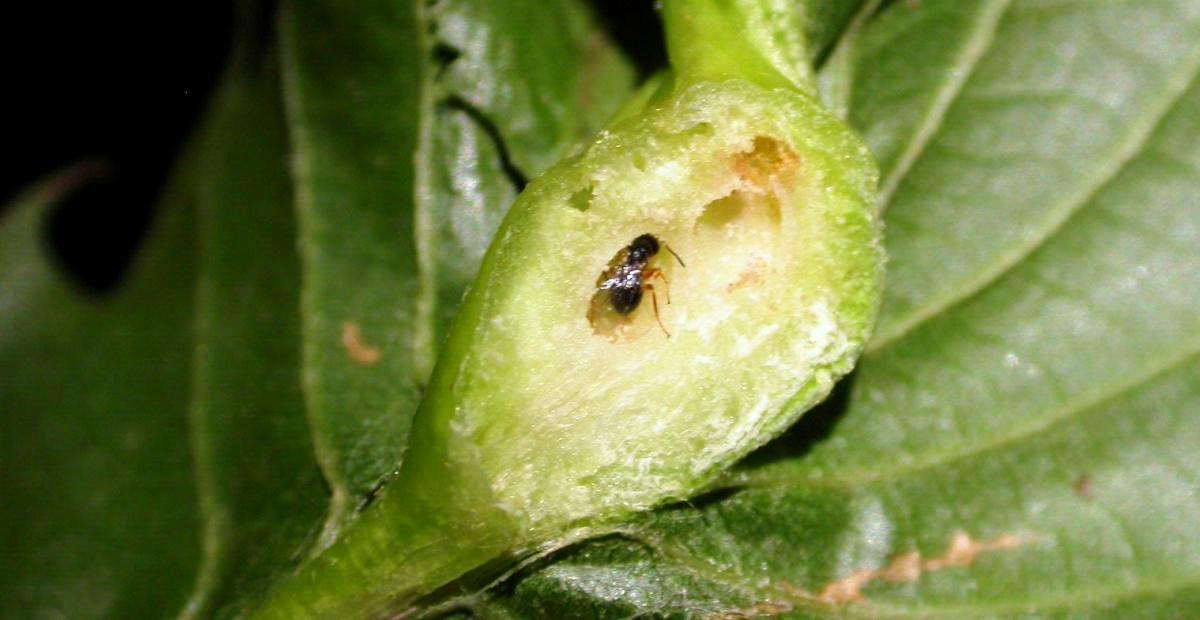 Morphology –
Dryocosmus kuriphilus, is a small hymenoptera considered one of the most harmful insects for the chestnut.
The phytophagus performs only one generation per year and, during its development cycle, passes through four distinct stages: egg, larva, pupa, adult.
The eggs of this insect are provided with a long peduncle; the females arrange them in groups within the buds near the vegetative apex. Accurate observations are not sufficient to ascertain their presence as the signs relating to the oviposition holes disappear during the summer season. The transition to the larval stage comes to the end of the completion of embryonic development, which normally lasts about 30-40 days.
The larvae have a somewhat slow development, are apod and anophthalmos; when ripe they have a whitish coloring and dimensions of 2,5 mm in length. They spend the winter season inside the buds without these showing obvious alterations.
The pupae, which are initially white in color, brown during development until they become black when mature. These have an average length, as in the larvae, around 2.5 mm.
The adults are about 2.5 – 3 mm long; with the exoskeleton which has a blackish color with the exception of the legs which are ocher.
The female antennae are geniculated and composed of 14 segments (antennomers); the scape and pedicel structure is characterized by a reduced length and a greater development in diameter, while the antennomers that make up the flagellum are isodiametric and give the antenna a filiform appearance. Overall, the antenna has a length of about 1.5 mm.
The front wings have little evident ribs.
The abdomen is very large and rounded and ends with a highly specialized ovipositor to lay eggs inside plant substrates (specifically buds); the ovipositor is made up of three valves, two even and one uneven. In the resting phase, the terebra is scarcely visible as it is retracted inside the abdomen.

Aptitude and biological cycle –
The Chestnut gall wasp presents only one generation per year which is characterized by the presence of only females that reproduce by telitochal parthenogenesis. Each female is capable of producing 100 to 150 eggs; these values ​​associate a very high reproductive potential to the species.
The males are therefore absent and only females emerge from the eggs.
The biological cycle of this insect begins in June and July when winged females emerge from the galls and go to lay their eggs in the buds present.
The larvae emerge from the eggs and develop slowly, always within the buds, without these presenting external symptoms of the infestation.
The larvae then, in the following spring, at the vegetative restart, have a rapid development that determines the formation of characteristic galls, first greenish and then tending to red, with a diameter ranging from 0.5 to 2-3 cm.
The larvae themselves often cause an arrest in the development of the buds, from which small-sized leaves develop.
The course of the biological cycle is influenced by climatic factors, related for example to the altitude and exposure of the plants, as well as to the different vegetative earliness of the cultivated varieties.

Ecological role –
The damage due to Dryocosmus kuriphilus is very evident: it causes the formation of galls, that is, swelling of various shapes and sizes, affecting the buds, leaves and catkins of the chestnut.
A strong attack of this insect can result in a substantial drop in production, a reduction in vegetative development and a strong deterioration of the affected plants.
During the summer and autumn the galls formed on the shoots gradually dry out and can persist on the trees even in the following years. The extent of the damage is linked to the number of galls per plant which, in all probability, depends not only on a different sensitivity of the cultivars, marked in the Euro-Japanese ones, but also on the more or less recent period of settlement of the pest in the territory.
In fact, this insect, which is particularly harmful to the chestnut and related species, is considered the most harmful insect in the world due to the rapid deterioration of the plants it attacks.
To limit the population of this insect, an ide parasite is used which was discovered in China in the 1970s. The parasitoid is the hymenoptera Torymus sinensis Kamijo interesting for its specific limiting capacity.
The first introductions of the parasite were made in Japan starting in 1982 where it took over, killing the cynipid population in a period of about ten years. This experience was the premise for obtaining funding for a Piedmont Region project aimed at introducing the parasitoid into the region. Since 2003, a laboratory study of the adult specimens obtained from galls collected in Japan began, and then in the following years the introduction into the field with the effects of a surge in parasitization in 2009. Similar initiatives were undertaken by other regions invest the problem.
Torymus sinensis Kamijo performs only one generation per year (like the cinipid) and the population is made up of both males and females. The adult flickers in the spring from the dry galls present on the chestnut. It is an insect of about 2.5mm in length, with a metallic green body and yellowish legs. The female is clearly distinguished from the male by the presence of the ovipositor.
The Torymus sinensis begins to flicker from the winter galls between the end of March and the first week of May (depending on the climatic trend), it feeds on sugary substances and has an average life of about 25-30 days, in which it will have to pair in order to give life to the next generation.
The paired females will thus be able to lay up to 70 eggs inside the newly formed galls. The females must necessarily mate, otherwise, they will still oviposition in the galls but the individuals who flicker the following year will only be males, which then leads to the end of the Torymus sinensis population and to the failure of the introduction of the parasitoid.
The eggs are laid on the body of the cinipid or in any case inside the larval cell, in this way the ectoparasitic larva of the Torymus sinensis feeds on the larva of the Cinipid. During the winter, the parasitoid gets stuck inside the larval cell (in the surface that has now become dry) to become an adult in the spring and flicker starting its biological cycle again.
Research shows that Torymus sinensis is a parasitoid specific to the chestnut cinipid.