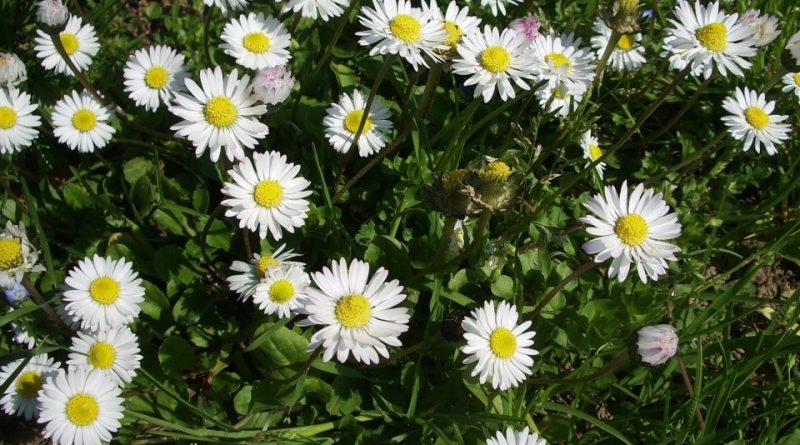 The common daisy (Bellis perennis L., 1753) is a herbaceous species belonging to the Asteraceae family.

Etymology –
The term Bellis comes from béllis pratolina, daisy, a plant already mentioned by Pliny.
The specific epithet perennis derives from perennial, which lasts several years, from the strengthening prefix for- and from ánnus year, due to the longevity of the plant or for flowering throughout the year.

Geographical Distribution and Habitat –
The Common daisy is a plant native to western, central and northern Europe and very common in Europe. In addition to Europe, it is found in western Asia, on the island of Madeira, in northern Africa (Libya) and in North America (where it is to be considered naturalized).
In Italy it is quite common in the meadows.
Its typical habitat is that of uncultivated areas, meadows, gardens and parks on substrate preferably both limestone and siliceous with neutral pH, soil with high nutritional values ​​and on average humid. Its altitude distribution can reach up to 2000 m above sea level. It should be considered a synanthropic plant. 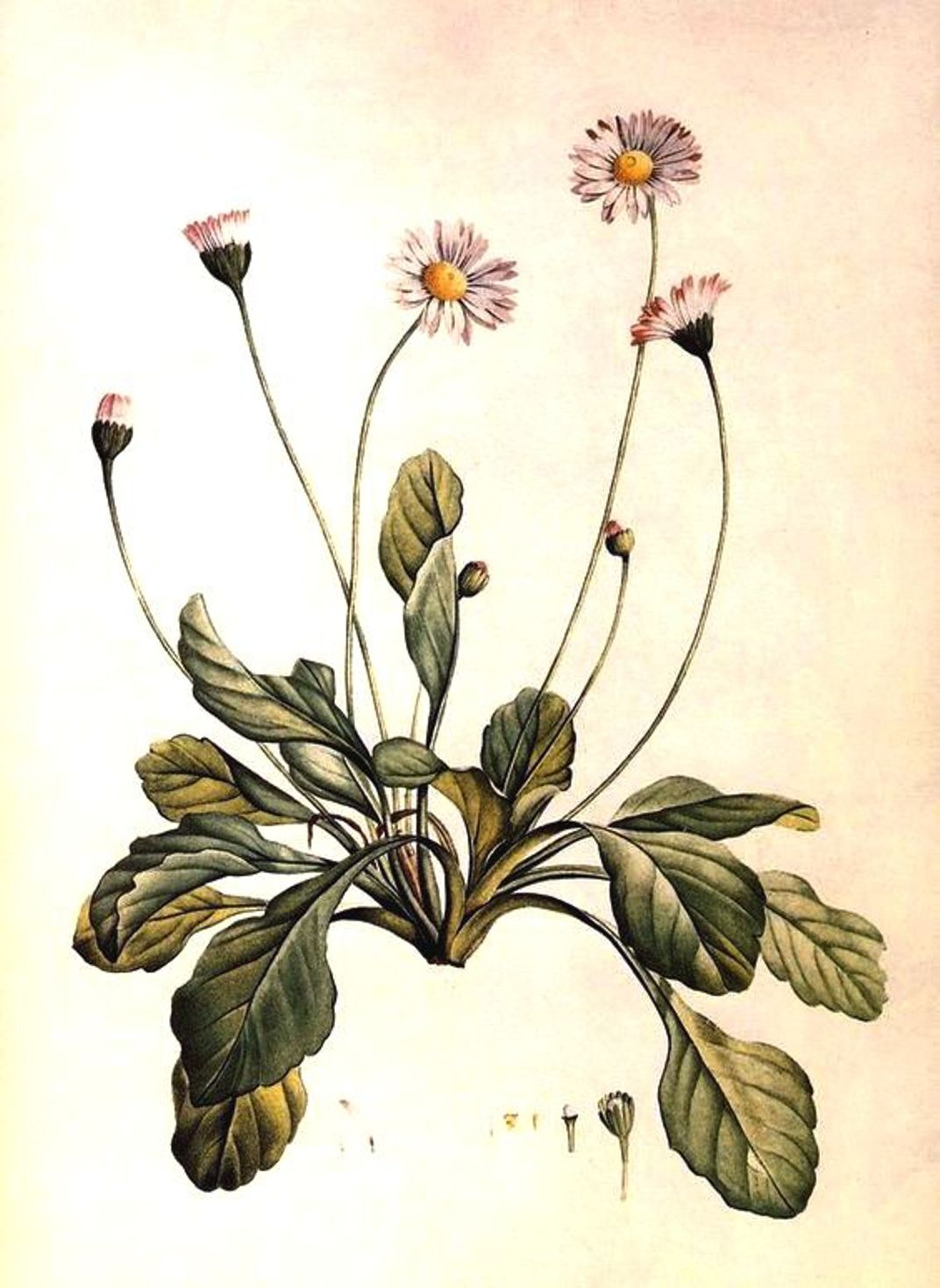 Description –
Bellis perennis is a small herbaceous plant, perennial, pubescent in all its parts (with the exception of individual flowers), no taller than 12-15 cm and provided with a robust taproot root.
The leaves are usually arranged in a basal rosette adhering to the ground; they are green, sometimes glaucescent, with a winged petiole, with a spatulated blade and a crenate margin, with only the middle rib visible.
The flowers are solitary radiated flower heads, with an average diameter of 2 cm (fairly constant character) or slightly larger, present almost all year round, on simple scapes, afilli, or bearing at most a few leaves in the basal portion up to a couple of cm high; the involucral bracts, oval with rounded or ± acute apex, are arranged on two ranks and are hairy on the whole lamina; on a conical receptacle there is a disk of tubular and actinomorphic hermaphrodite flowers, yellow, surrounded by ligulate flowers (the so-called “ray flowers”) with white ligules ± tinged with violet-red at the apex. The flower head behaves like a single flower: at night and when the sky is cloudy, or there is a lot of humidity, it tilts and closes, while during the day it follows the course of the sun, moving towards it.
Flowering occurs practically throughout the year in the cooler areas (mountains), with summer vegetative rest elsewhere.
The fruits are oval-shaped indehiscent achenes and contain a seed without endosperm, without pappus; the surface can be pubescent; dispersion occurs after the fall, in contact with the ground, by means of ants and other soil insects.

Cultivation –
The Common daisy is a plant that grows widely in its spontaneous state but can be propagated by seed, especially on moist soils up to 2000 meters above sea level.
It prefers soils with neutral pH regardless of whether they are calcareous or siliceous. These plants however grow well in a “loose”, rather sandy, and fertilized soil; they should be placed in sunny areas.
Flowering can take place, especially in the cooler areas, all year round.
Sometimes it is considered a weed because of its paneling development but it is also used as an ornamental plant thanks to the delicate appearance of its flowers. Especially for the commitment of the German gardeners, some varieties (cultivars) with 5–6 cm diameter flower heads and colors such as pink or purple or flower heads with multiple series of external ligulate flowers have been selected.

Uses and Traditions –
One of the first citations of this flower is from the Roman writer Pliny the Elder (Como, 23 – Stabia, 79).
Bellis perennis is a plant that can be confused with similar species such as:
– B. margaritifolia Huter; very similar to B. perennis but with flowers on average larger (up to 3 cm in diameter) and does not present hairiness on the laminae, which are more rounded and cochleariform; it is present in Basilicata, Calabria and Sicily.
– B. sylvestris Cirillo; with flower heads noticeably larger than B. perennis (diameter> 3 cm), and bearing acute scales (rounded or obtuse in B. perennis), generally more elongated leaves (oblanceolate) and progressively narrowing (sharply in B. perennis) on the petiole, missing in Val d’Aosta, Piedmont, Lombardy, Trentino, Veneto, doubtful in Friuli V. Giulia.
– B. annua L. subsp. yearly; which blooms in winter and spring, until June, differs from B. perennis in being an annual cycle plant, for the flower stems bearing leaves in the basal portion up to mid-height, and sometimes also branched, and for the flower head of size smaller (generally smaller, or slightly larger, half the diameter of the B. perennis flower heads); missing in the Aosta Valley, Piedmont, Lombardy, Trentino, Veneto, Friuli Venezia Giulia, doubtful in the Marche.
– B. pusilla (N. Terracc.) Pignatti; purely mountain species, present in the central Apennines (Tuscany, Abruzzo, Molise, Marche and Umbria) over 2000 meters above sea level, of very small size and with flower heads always with a diameter <2 cm. Furthermore, in high altitude alpine environments there are “daisies” which, at first glance, can be mistaken for Bellis perennis L. .. In particular, Chrysanthemum alpinum L. is easily distinguished by the shape of the leaves, deeply divided into narrow lacinias and not all basal but also present on the scape; vice versa Aster bellidiastrum (L.) Scop., commonly called “false marguerite”, requires a more detailed examination, distinguishing itself from Bellis perennis L. for characters that are not immediately evident, ie the presence of pappus with persistent bristles, and the double series of scales involucrali. As for its status, there is no news of protection of the plant on Italian territory, although in some areas its presence is rare. The main chemical constituents of this plant are: – Ascorbic, malic, fumaric, tartaric, caffeic, acetic and oxalic acid, resins, essential oil, fatty oils, sugars, tannins, a bitter principle, inulin, mucilage, polyine, a saponin, triterpenes.
For this composition it is used in many applications. In cosmetics it is used to lighten the skin, cleanse areas macerated by sweat, decongest the face around the eyes. Furthermore, research in the phytopharmacological field on this plant has confirmed that it is moderately active as an astringent, to reduce the production of mucus and for its anti-inflammatory action. Studies are underway to ascertain the effectiveness of saponin extracted from flowers in inhibiting the increase in the level of triglycerides in the body. Daisies have long been a popular home and traditional medicine remedy, used in a variety of situations. In the past, poultices of boiled leaves were applied to treat bruises, bruises, sprains, sores, boils and phlegmons. In modern herbal medicine, for internal use, flowers and plants are used for light laxative properties but, above all, to stimulate diuresis and sweating, thus acting as detoxifying. For external use, to reduce tissue secretion and anti-inflammatory function in mouth and throat irritations and for red eyelids. It is generally recognized that it is a useful plant for cough and phlegm, which can be used freely and without contraindications, also as a support for arthritis therapy, in liver and kidney disorders. The famous Sienese doctor and naturalist Mattioli stated that: “The leaves in salads or cooked in broth are laxatives, chewed they heal inflammations of the mouth and tongue; bruises lessen those of the genital organs. ” The infusion of the leaves can be used as an insect repellent. Flowers and leaves are used in infusion as a medicine against hypertension or as an astringent and diaphoretic. By macerating it, an effective liquid is obtained as a pesticide. An infusion of leaves (like tea) can be useful in insomnia. In ancient times the leaves were used for the healing of wounds. In general, according to popular medicine, the medicinal properties are: – ophthalmic (cures eye diseases); – emollient (resolves an inflammatory state); – bechica (soothing cough); – anti-echymotic (slows the spread of blood in the tissues adjacent to a contusion); – bactericidal (property of preventing or slowing down the development of microbes); – antispasmodic (reduces muscle spasms, and also relaxes the nervous system); – laxative (has purgative properties). Finally, it should be remembered that bees visit the flowers of this plant to collect pollen, even if it is not particularly abundant.

Method of Preparation –
The leaves collected before flowering can be used and in some areas the young leaves are eaten in salads along with other spring vegetables, the buds can be prepared in vinegar. The flower heads can be used for risotto.

Warning: Pharmaceutical applications and alimurgical uses are indicated for information purposes only, they do not in any way represent a medical prescription; therefore, no liability is accepted for their use for healing, aesthetic or food purposes.