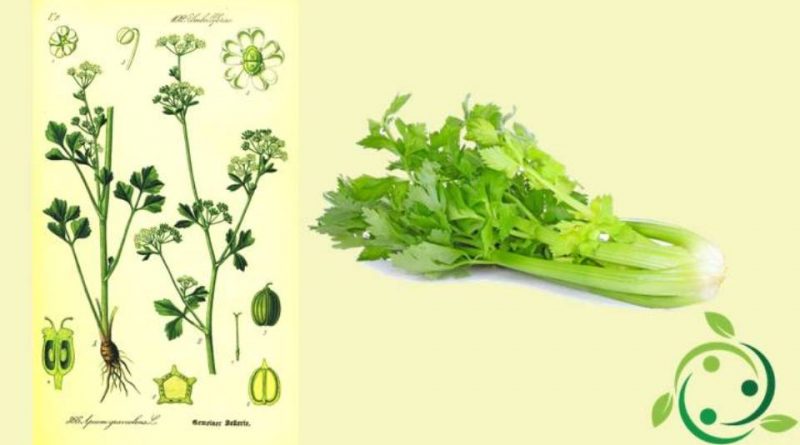 Celery (Apium graveolens L.) is a biennial herbaceous species of the Apiaceae family used both as a spice in the kitchen and as a medicinal plant.

Origins and History –
Celery, whose term would derive from the Greek “selinon” in turn, probably derived from “Petroselinon” which indicates a genus of plants belonging to the Umbelliferae family such as parsley.
In ancient times, celery was connected to the cult of the dead. In ancient Greece it was used as a symbol of mourning, while in ancient Rome it was an ornament for tombs. It was also found in the funerary outfits of the Egyptian mummies.
For the Hellenics it was a sacred plant, whose effigy was also represented on the coins of the Sicilian city of Selinunte, it seems an important center for the production and trade of vegetables.
For its digestive, stimulating, fortifying and antirheumatic virtues, celery root and juice were among the remedies of the ancient pharmacopoeia. Hippocrates said: “For the upset nerves, celery is your food and remedy”.
According to Pliny, the Greeks refrained from using celery in the kitchen as a common ingredient, because they believed it was a sacrilege towards an exceptional plant. Homer himself attributed divine properties to him, as evidenced by the passage of the Iliad where Achilles heals his horse from serious illness thanks to celery.
The Romans used it abundantly in the kitchen, and even during banquets they prepared crowns for diners, since they thought that its aroma would counteract the alcoholic intoxication.
During the Middle Ages this vegetable played an important role especially for its therapeutic virtues. Saint Hildegard believed that it was possible to combat “tetraggine” (depression) with a mixture obtained by shredding celery and nutmeg seeds.
The aphrodisiac qualities of this plant find a first trace written in the fifteenth century with Michele Savonarola, who warned women against eating it, because it instigated coitus even those who wanted to remain chaste.
It was in eighteenth-century France that celery became all the rage as an erotic stimulant, raw in a spicy sauce, cooked in a creamy soup.
Many courtesans took on the latter type of potage, devised by Madame Pompadour against her frigidity, to increase libido and sensitize the senses.
At the beginning of the nineteenth century the famous gastronomist Grimod de la Reynière wrote: “Even if part of its qualities are lost when cooked, it cannot be hidden that celery is a plant rich in aromas: invigorating, stimulating, exciting and consequently strongly aphrodisiac. ”
In the medical texts of that time, celery, classified as certainly an aphrodisiac, represented the touchstone for evaluating the influence of other foods on the eros.
Both in the ribbed and in the turnip variety, richer in nutritional and therapeutic factors, today celery is recognized as having many of the virtues attributed to it in the ancient pharmacopoeia.
Every year, on 8 September, in Veneto, a cheerful festival is held, the celery festival of Rubbio, where you can admire the white celery of Rubbio, and taste various dishes based on this vegetable.

Description –
Celery is a biennial and sometimes perennial herbaceous plant, with a strong aromatic odor, with a thin tapered root in the spontaneous one, cylindrical-fusiform in the cultivated variety.
It has a cylindrical angular stem 30-60 cm high (up to 1 m) sometimes hollow, prostrate, erect or ascending, fistulous and branchy.
The leaves are shiny, 1-3 pinnate, with oval or rhombic toothed segments, sometimes completely divided; upper leaves sometimes ternate opposite.
The flowers are hermaphrodite, with five 0.5 mm white petals, gathered in umbrellas composed of 6-12 rays without casing and casing (bracts and bracts absent).
The fruit is an ovoid-globose diachenio, flattened and brown, with two very visible but thin vertical five ribs mericarps, united by a central axis (carpophore), from which the mericarps separate only when ripe.

Active principles –
Celery contains potassium, phosphorus, magnesium and calcium, vitamin C, vitamin K and, to a lesser extent, some B vitamins and vitamin E.
About 90% of this plant is made up of water; why it is diuretic and purifying.
Celery contains lutein, a protective antioxidant against the brain.
It is also a valid ally against hiatal hernia. Regular consumption of celery is useful in those suffering from high blood pressure, as it can help reduce its values. Celery juice, always if taken regularly, can be an aid against rheumatism. It has very few calories and can therefore offer an excellent expedient for giving flavor to sauces and sauces without increasing its calorific value for nothing.
Celery produces a precious essential oil with strong antioxidant properties.
The essential oil is mainly composed of limonene and saliene, which determine its characteristic odor, flavonoids and alkaloids.
100 g of celery contains 20 kcal / 84 kj.
Furthermore, for every 100 g of this product, we have:
– Water 88.3 g;
– Carbohydrates 2,4 g;
– Sugars 2.2 g;
– Protein 2.3 g;
– Fat 0.2 g;
– Cholesterol 0 g;
– Fibers 1.6 g;
– Sodium 140 mg;
– Potassium 280 mg;
– Iron 0.5 mg;
– Calcium 31 mg;
– Phosphorus 45 mg;
– Magnesium 16 mg;
– Zinc 1.24 mg;
– Copper 0.11 mg;
– Selenium 3 µg;
– Vitamin B1 0.06 mg;
– Vitamin B2 0.19 mg;
– Vitamin B3 0.2 mg;
– Vitamin A 207 µg;
– Vitamin C 32 mg.

Properties and Uses –
For this reason celery is one of the most popular foods even in detoxifying diets, thanks to its lightness and low calories, which make it a beneficial food.
Specifically, all the properties of celery can be summarized as follows:
– against water retention, it is in fact diuretic;
– purifying;
– lowers cholesterol and triglycerides;
– rich in fiber – useful against constipation;
– helps digestion;
– reduces intestinal swelling;
– fights hypertension;
– useful in case of gastritis;
– reduces inflammation in case of urinary and bladder problems;
– performs a protective action for the brain.
The digestive action is due to some molecules, including sedanin, a stimulating substance, which enhances the absorption of intestinal gas “. Furthermore, its detoxifying power, combined with the content of vitamin A, make it an excellent anti-inflammatory, not only for bladder problems, but also against acne and eye infections.
Regarding its ancient use as an aphrodisiac, the properties of celery in this case seem to be due to the presence of the delta-16 steroid hormones, which stimulate the activity of the sexual glands.

Preparations –
In the kitchen celery is used mainly as a flavoring. It has a rather strong flavor and an unmistakable aroma due to a strongly aromatic substance, which is, as mentioned, sedanine.
For this reason, celery is mainly used to impart flavor to other foods such as salads, soups, soups. Celery is practically indispensable for example in the preparation of a good broth.
We recommend, however, to use it preferably raw, or steamed or in a pressure cooker, in order not to disperse the precious nutrients.
For the same reason, celery should be consumed within 4-5 days of purchase.
Raw celery can be eaten before meals, in salads or in pinzimonio, or it can be used to make risotto, a hot or cold soup or a summer pasta such as half penne with celery pesto and peppers. In summer, celery centrifugates are also excellent, refreshing and purifying.
If you decide to eat it raw, celery is preferable by choosing the tenderest stems, cutting them into small pieces and dipping them in olive oil, salt and vinegar.
Otherwise you can make celery preparations in the oven by boiling the cut stems in salted water and then putting them in the oven with olive oil and bechamel or grated cheese.
Another possible easy-to-make alternative consists in boiling two stalks of celery and then passing them in flour and beaten egg and then frying them. Finally, finish cooking in a pan with tomato sauce.