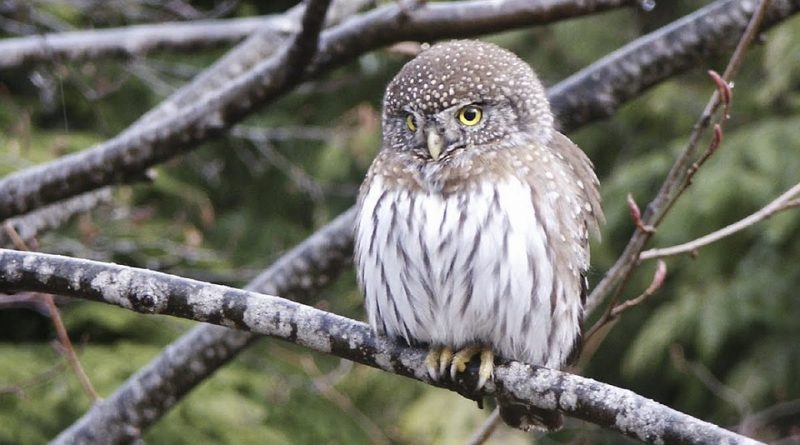 The Eurasian pygmy owl (Glaucidium passerinum Linnaeus, 1758) is a nocturnal bird of prey belonging to the Strigidae family.

Geographical Distribution and Habitat –
The Eurasian pygmy owl is a small nocturnal bird of prey with an area that covers almost all of Eurasia. In Italy it nests mainly in the central eastern part of the Alps.
Its habitat is represented by coniferous forests with a prevalence of mature trees. 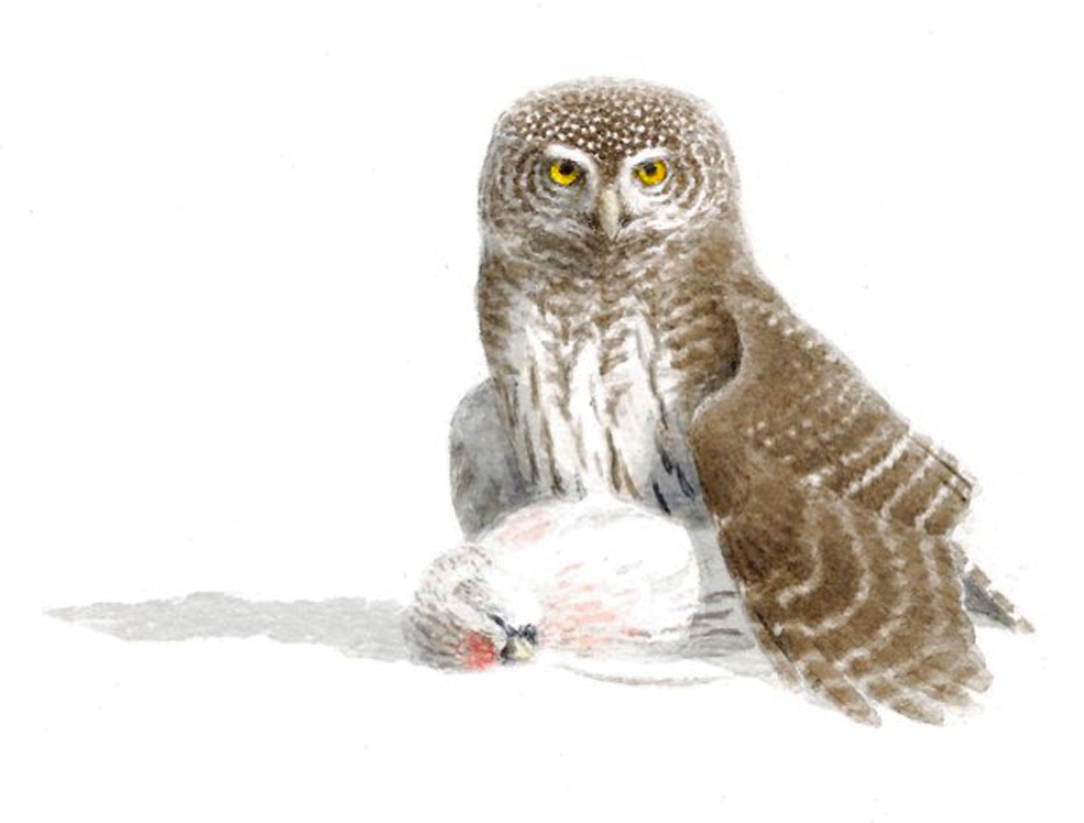 Description –
Glaucidium passerinum is a bird of prey that is recognized to have a total length of 16-17 cm, with a wingspan of 29-38 cm and a weight that, due to sexual dimorphism, differs between males, with 50-72 grams and females, with 65-83 grams. It is smaller than the common owl.
The body is robust with a plumage which is: upper brown with light spots, lower whitish with dark longitudinal streaks; in young people it is darker and without superior light spots.
The beak is small and hooked, with light coloring and gray base.
The head is small and rounded and the eyes are placed anteriorly, with a yellow iris.
The wings are wide and short, the tail is short, barred, which is raised rhythmically.
It has sturdy, short, feathered legs, with hooked nails.
The voice is a repetitive monosyllabic “gug”, reminiscent of the bullfinch’s whistle and a series of “diu u u”.
The flight is beaten and gliding, silent and undulating.

Biology –
The Eurasian pygmy owl has a breeding period from May to July.
This small bird of prey nests in the cavities of large trees that have been previously dug, mostly by the great spotted woodpecker.
In these it lays 3-9 eggs, white in color which it hatches for a period of 28-29 days. The offspring is nidicola and flies when it reaches 4-5 weeks of age.
This species breeds only once a year.
The life span is 10 years in freedom and over 20 years in captivity.

Ecological role –
The Eurasian pygmy owl, as mentioned, is a bird of prey active especially at night, but it is also possible to see it during the early hours of the day and at dusk. It can also be observed during the day, when it is not active but sometimes stationed on the tops of conifers. In general it is therefore sedentary, nesting and irregular migrant.
It is a bird with a solitary habit that adapts perfectly to living in the woods, especially for its morphology linked to the short and rounded wings and the long enough tail that allow it to maneuver easily among the trees.
This bird of prey has excellent eyesight and hearing, and is capable of capturing birds almost as large as her.
In turn, it is preyed on by other larger birds of prey, including tawny owls, eagle owls and other strigiformes, and some species of diurnal birds of prey.
The Eurasian pygmy owl feeds on small birds, such as tit, rulers and finches, generally up to the size of a thrush, small rodents such as mice and voles, reptiles and insects.
The major dangers for this bird are related, as often happens, to the transformation and fragmentation of the nesting habitat.
Glaucidium passerinum is listed in Annex I of the Birds Directive (79/409 / EEC). Species subject to protection according to Article 2 of Law 157/92.