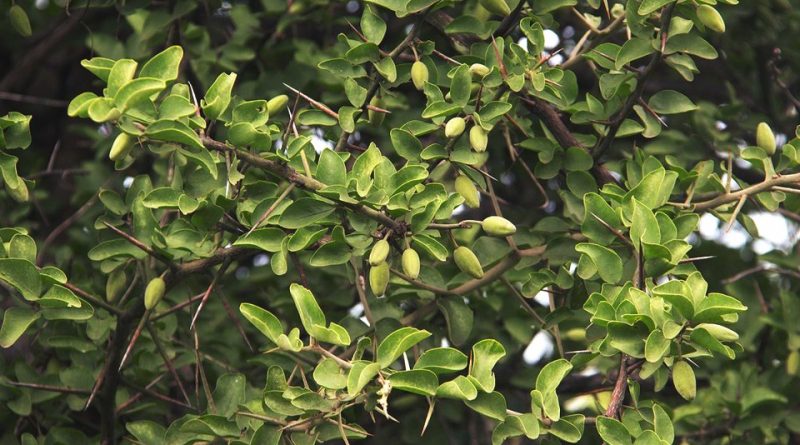 The Egyptian Balsam (Balanites aegyptiaca (L.), Delile, 1812) is an arboreal species belonging to the Zygophyllaceae family.

Systematic –
From a systematic point of view it belongs to the Eukaryota Domain, Kingdom Plantae, Magnoliophyta Division, Magnoliopsida Class, Subclass Rosidae, Sapindales Order, Zygophyllaceae Family and therefore to the Genus Balanites and to the Species B. aegyptiaca.
The terms are synonymous:
– Agialid aegyptiaca (L.) Kuntze;
– Ximenia aegyptiaca L.

Etymology –
The term Balanites comes from the Greek βᾰλᾰνίτης balanítes acorn-shaped precious stone (in Pliny): reference to the shape of the fruits.
The specific Egyptian epithet comes from Aegyptus Egypt: Egyptian, of Egypt, for one of the territories of greatest presence.

Geographical Distribution and Habitat –
The Egyptian Balsam is a native plant of an area between Africa and the Middle East.
It is present in North East Africa, Egypt and also in the Sahel-Savannah region of Africa and on the Arabian Peninsula.
Its habitat is somewhat varied as it is a species that tolerates a wide variety of soil types, from sandy to clayey and with a different presence of humidity, from arid to sub-humid soils; it also tolerates, on average, the presence of animal husbandry, fires or floods. 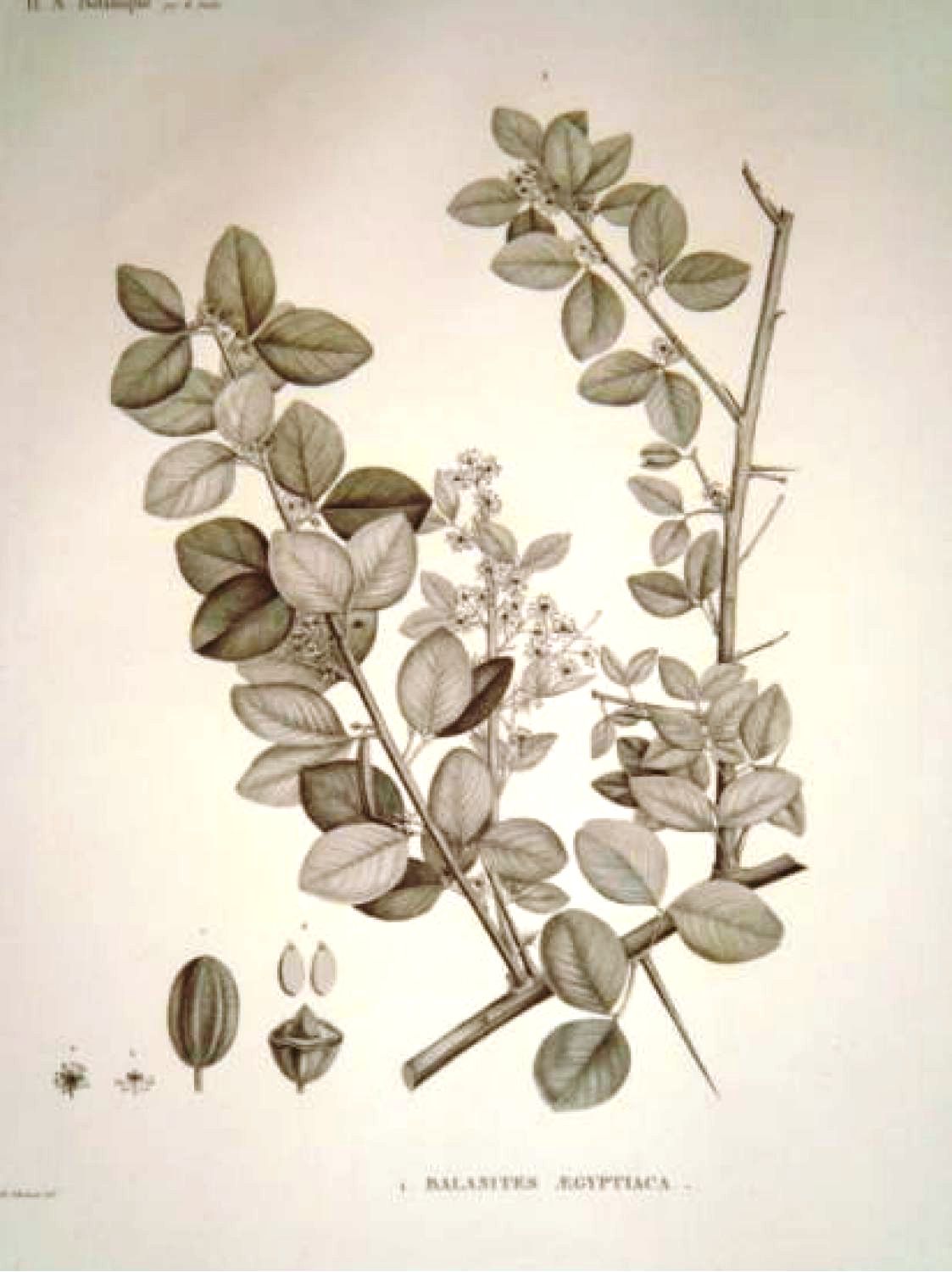 Description –
The Balanites aegyptiaca is a tree that can reach 10 m in height, with a generally narrow shape.
The fluted trunk has a frayed gray-brown bark with scattered yellow-green spots.
The branches are equipped with long, straight spines, green in color and arranged in a spiral.
The leaves are composed, dark green in color, which grow from the base of the thorns, and are composed of two leaflets of varying size and shape.
The inflorescence is made up of bouquets of some flowers, sessile or carried on short stems. The flower buds are ovoid in shape and are covered with a short tomentose pubescence. The flowers are greenish-yellow, hermaphrodite, formed by five petals in radial symmetry, with a diameter of 8-14 millimeters. The peduncle of the inflorescence is grayish, fluffy and usually less than 10 mm long, although 15 mm have been observed in Zambia and Zimbabwe.
The fruit is ellipsoidal in shape, no more than 4 cm long and green when not ripe; when ripe it takes on a brown color, more or less light, with a crunchy skin that contains a brown or brown-green pulp with a sticky consistency that surrounds a hard core.

Cultivation –
The Balanites aegyptiaca tree is planted in agro-forestry programs, greases irrigation channels and is used to attract insects to be trapped.
Its cultivation is aimed at the use of its wood which varies in color from pale yellow to brown. It is used to make furniture and durable objects as tools, as well as as firewood, which produces little smoke and good coal.
It can grow in many types of soils and in different humidity conditions, obviously in better water conditions the growth and yield in wood is faster.

Uses and Traditions –
Balanites aegyptiaca is known by many names, also according to the territory where it grows. In English the fruit was called desert date, soap berry or shrub, throne tree, Egyptian myrobalan, Egyptian balsam or Zachum oil tree; in Arabic it is known as lalob, hidjihi, inteishit and heglig (hijlij). In Jieng it is called Thou or thau, in Hausa it is called aduwa, in Tamasheq, taboraq in the Tuareg language, in Swahili mchunju and in Bedena amarica.
The desert date has been cultivated in Egypt for over 4000 years, data also testified by the presence of stones present in the tombs as votive offerings dating back to the twelfth dynasty.
The tree was described in 1592 by Prosper Alpinus with the name “agihalid”. Linnaeus considered it a species of Ximenia, but Adanson proposed the new genus of Agialid. The Balanites genus was later founded in 1813 by Delile.
As mentioned, wood is used for this plant, which is used to make furniture and durable objects as tools, as well as firewood, which produces little smoke and good coal.
Generally trees and smaller branches are used as living or cut fences because they are hardy and thorny.
This tree is grown in several places, also, for its fruits.
The bark produces fibers and the natural rubber that oozes from the branches is used as glue, while the seeds have been used by local people to make jewelry and beads.
Many parts of the plant are used in Africa as food, especially in times of greater famine. The tree is considered precious in arid regions because it produces fruit even in dry periods.
The seeds have a molluscicidal effect on Biomphalaria pfeifferi (a species of freshwater snail).
African elephants also consume desert dates.
The fruits of the desert date are mixed in porridge and eaten by the nursing mothers and the oil is consumed for headaches and to improve breastfeeding.
The bark and fruit extracts repel or kill freshwater snails and copepods, organisms that act as intermediate hosts of parasites including Schistosoma, Bilharzia and Dracunculus medinensis.
Worm infections are also treated with desert dates, as well as liver and spleen disorders. A decoction of the bark is also used as an abortive and antidote for poisoned arrows in West Africa.
The seeds contain a 30-48% non-volatile oil, as well as the leaves, the pulp, the bark and the roots, and it contains diosgenin and yamogenin sapogenins.
Saponins are also found in the roots, bark wood and fruits.
Various Sahel tribes use the thorns of the trees to make tattoos through engravings.
Finally, remember that the carpenter ant (Camponotus sericeus) feeds on the nectar oozed from the flowers. The larva of the emperor’s moth (Bunaea alcinoe) can cause significant defoliation of the tree.

Preparation method –
The Balanites aegyptiaca leaves are eaten raw or cooked, the oil seeds are boiled to make them less bitter and eaten mixed with sorghum; even flowers can be eaten.
The fruit can be fermented for alcoholic beverages.
The seed paste left after the extraction of the oil is commonly used, in Africa, as forage for animals.
The fruits of the desert date are consumed, mixed in the porridge.
Worm infections are also treated with desert dates, as well as liver and spleen disorders.
From the bark a decoction is prepared which is used as an abortive and antidote for the poison of arrows in traditional medicine of West Africa.