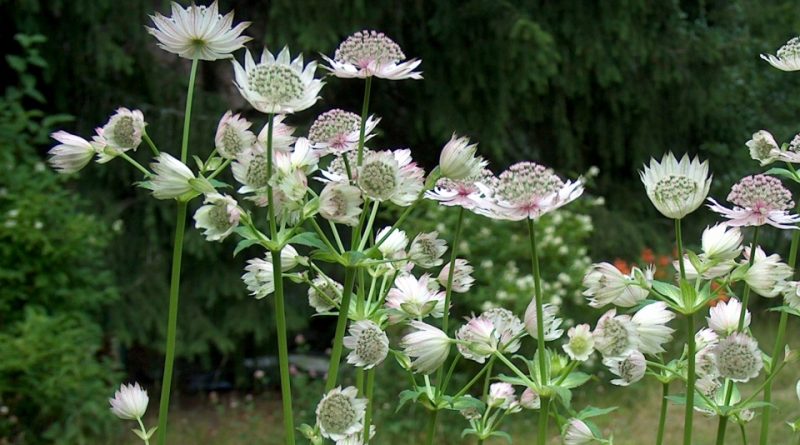 The Great masterwort (Astrantia major L.) is a perennial herbaceous species belonging to the Apiaceae family.

Etymology –
The term Astrantia comes from the Greek ἀστήρ astér astro and from ἄνϑοϛ ánthos fiore: for the inflorescence wrapped in petal-shaped bracts arranged in a radial pattern that make it take on the appearance of a single star-shaped flower.
The specific major epithet is an orthographically incorrect form, but valid, for maior, us, comparative of magnus grande: greater, larger or longer (compared to other species of the same genus).

Geographical Distribution and Habitat –
The Great masterwort is a plant native to the mountain and alpine areas of southern Europe (Pyrenees, Carpathians and Balkans), but also present in the Caucasus up to Anatolia.
In Italy it is common in the Alps and less frequent in the central-southern Apennines, where it is found mostly in mountain fat meadows or forest edges or near rivers; generally on limestone, at altitudes between 600 and 2300 m s.l.m .. 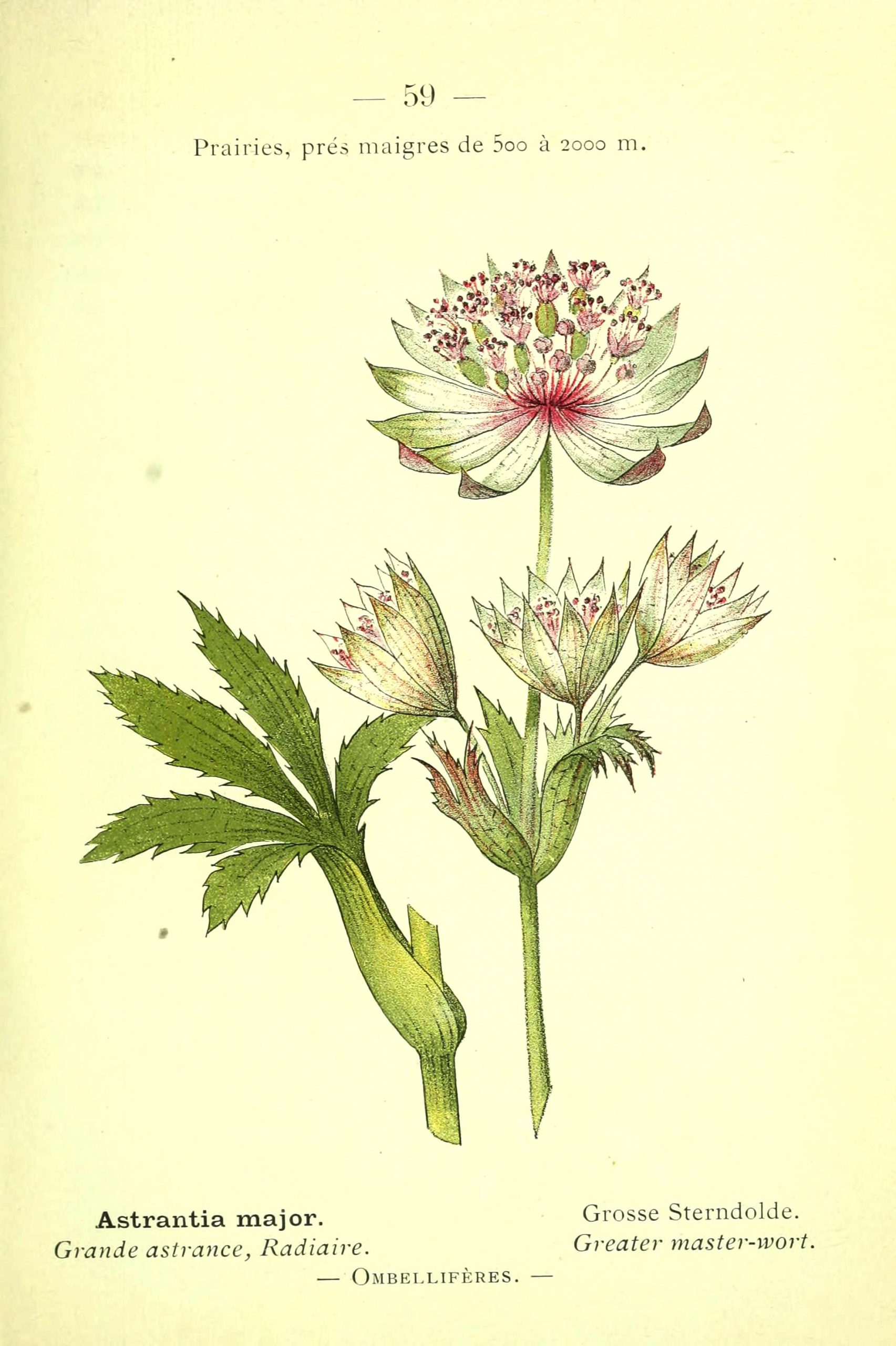 Description –
The Great masterwort is a scapular hemicryptophyte that annually reproduces by means of buds at ground level.
It has a dark, fleshy root with an acrid-aromatic flavor which is generated by a secondary hypogean rhizome, while the shape has an elongated floral axis, not very branchy and with few leaves (scaposa).
The aerial part of the plant, which generally does not exceed one meter in height, is formed by cylindrical, erect, slightly branched and hairless stems of bright green color covered by basal leaves and cauline leaves that differ in shape, size and presence or not of petiole.
The basal leaves are inserted on the stems by means of long peduncles, they have the palmate-lobed page divided into 5-7 oblong-pointed lobes with indented margins.
The cauline leaves, on the other hand, are sessile (without petioles), simple and much smaller than the basal ones. In autumn the leaves dry out and fall leaving the stems bare.
The flowers are gathered in showy umbrella-like inflorescences and each inflorescence is supported by a crown of 10-20 oval-lanceolate bracts of white, pink and sometimes even reddish color which, from licenses at the beginning of flowering, gradually become erect. The stamens are numerous and long.
The flowers, inserted on the stems by long peduncles, are hermaphroditic, actinomorphic (with radiant symmetry) and are pollinated by bees and butterflies.
The flowering period is between the months of May-July.
The fruits are elongated and sub-cylindrical achenes with a striped and wrinkled surface.

Cultivation –
Astrantia major is a plant that can be grown for flowering borders. Its cultivation is somewhat easy and forms thick tufts. It is a plant that prefers partial shade (sun in the morning) but also accepts sunny positions willingly, as long as the soil is kept humid. It bears the very intense cold and is long-lived: it blooms for at least 5-7 years, then it is better to renew it. It lives well near water (ditches, ponds); frequent watering must be guaranteed and the soil must never be dried in summer.

Uses and Traditions –
As well as being an ornamental plant, Astrantia major is of particular interest from a medicinal point of view as it can be used as a diuretic and purgative.
Medicinal use that was in vogue mostly in the past while now it is mainly used for garden decoration.
The plant is harvested in September and dried roots are mainly used which contain salts, tannins, purgative substances. The infusion of the plant has diuretic properties, while decoctions are purgative.
Furthermore, it can be used, on an artisan or industrial level, as a coloring raw material and for particular resins.
Astrantia major is a protected species.

Preparation method –
Dried roots of this plant are used to prepare infusions for diuretic purposes or, as decoctions, for purgative purposes.