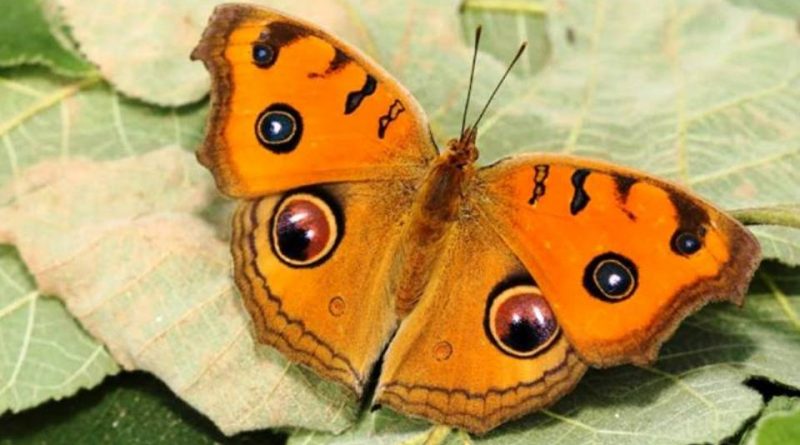 The peacock pansy (Junonia Almana Linnaeus, 1758) is a moth belonging to the Nymphalidae family.

Geographical Distribution and Habitat –
The peacock pansy is a butterfly that lives in an area between Southeast Asia, China and Japan; it is present in India, Cambodia, Sri Lanka, the Philippines and the Malaysian archipelago up to Sumatra, Borneo, Sulawesi and Java.
Its habitat is very varied, as it can be found in the clearings of the forest, scrub of acacia thorns, beaches lined with palm trees, savannah, arid woods, farmland and botanical gardens. However, it is mainly a kind of plain that can be found at altitudes between sea level up to about 500 m, even if it can go up to 1000 m. s.l.m ..
This butterfly exists in two distinct adult forms, which differ mainly in the motifs on the underside of the wings.

Morphology –
The adult Junonia Almana butterfly has a wingspan of 54–62 mm and has a seasonal polyformism which is manifested mainly by the difference of the motifs on the underside of the wings: the shape of the dry season has few signs, while the shape of the season wet has additional points and lines.
The adult form of the dry season takes on the following aspect:
– Intense yellow-orange coloring on the upper part and front wing with the presence of a pale dark transverse bar and a much darker short transverse bar with lateral black marginal lines through the cell, another similar one that defines the cellular disks; costal margin, an internal and an external subterminal line, and a dark black terminal line; presence of a large white centered ocello and an external black ring on the disc in the interspace; two similar but smaller sub apical ocelli with a dark pale point above them and a short oblique bar that connects them on the coast. Rear wing: a small tiny black-centered disc ocello and in the other cavity, with a very pale yellow ocellus above larger, surrounded by a black ring that extends above; in the center of this orange and internally brownish – black and externally bluish ocello, with two minute white spots in vertical order between the two colors; finally we find sinuous black subterminal and terminal lines.
The shape of the wet season looks like this:
– It is similar to the lower part with deeper and heavier black marks, more clearly defined subterminal and terminal lines. The lower part is pale ocher. The front wing has a cell crossed by short and sinuous sinuous dark brown lines, a similar line on the cellular disks and another beyond it, both folded inwards at an angle that continue towards the back; the space between them forms a wide disc band, which fades towards the whitish color posteriorly; the post-disc ocelli, the subterminal and terminal lines are as on the upper side but paler. The rear wing has a subtle dark sub basal transverse line, a straight whitish disc band that follows the one on the front wing; the post-disc ocelli, the subterminal and terminal lines as in the upper part but paler; the anterior ocellus has a double iris in the center. The antennae are dark brown in color; head, thorax and abdomen are slightly darker than the shape of the dry season.
The eggs are green, spherical with longitudinal and shiny ridges of 0.90 – 1.00 mm in length.
The caterpillar has a cylindrical shape, with a blackish, slightly hairy head. The body is brown, ocher-brown, with a dorsal, subdorsal and lateral blackish line, and a row of small annular spots under the latter; the second segment, anteriorly, has a transverse reddish stripe; second, third and fourth segment, posteriorly, with a transverse blackish strip; the penultimate segment armed with a backbone, a subdorsal and two lateral rows of short and thin backs.
The pupa is rather short and thick; it has a broad head and thorax, a pointed cap at the bottom; thorax and abdomen dorsally with short tubercular points; the color is brown-ocher.

Aptitude and biological cycle –
The hatching of the eggs occurs after about days of incubation. Immediately after hatching, the larva (caterpillar) comes out feeding on its shell.
This goes through five distinct stages over a period of 15-16 days.
Caterpillars feed on plants such as: Asteracantha, Hygrophila, Barleria, Osbeckia, Alternanthera, Mimosa, Vandellia, Antirrhinum and Plantago and other species.
In the adult stage, butterflies usually fly in small groups of two or three individuals. They often flutter for several minutes on the ground or on low leaves, especially when the weather is cloudy. The behavior is somewhat uneasy and if you get close to them they move quickly in the air, before settling down again, usually out of reach especially among the thorny branches of the acacias.

Ecological role –
The peacock pansy, even if at the moment it appears, are of minimal concern in the IUCN Red List, they are however linked to habitats, the erosion of which can determine, as for many other species, a considerable contraction of populations.
We remember that these Lepidoptera, like others, carry out, at the adult stage, an important pollination action of the species they visit.