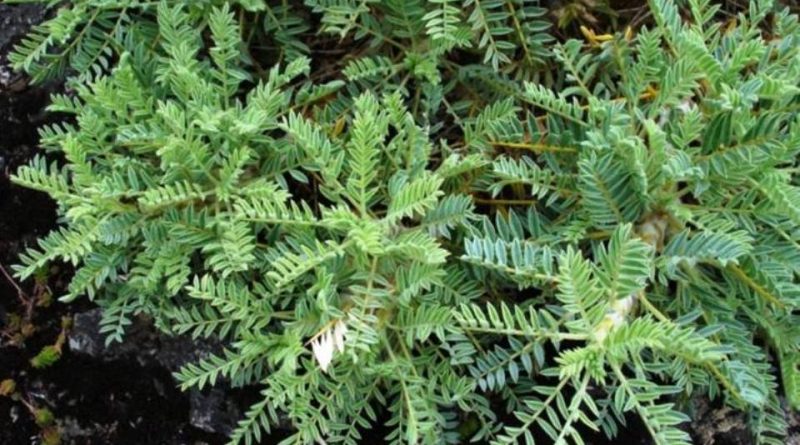 Systematic –
From a systematic point of view it belongs to the Eukaryota Domain, Plantae Kingdom, Magnoliophyta Division, Magnoliopsida Class, Fabales Order, Fabaceae Family, Faboideae Subfamily, Galegeae Tribe and therefore to the Genus Astragalus and the Species A. microcephalus.
The term is synonymous:
– Astracantha microcephala (Willd.) Podlech ..

Etymology –
The term Astragalus comes from astrágalus, a legume mentioned by Pliny (perhaps from the Greek ἀστράγαλοϛ astrágalos astragalus, wing, heel, vertebra, a bone used by the Greeks and Romans to also obtain game dice to which the angular shape of the seeds is recalled (second A. Gentil and Dave’s Garden) or gnarled roots (according to D. Gledhill and Flowers in Israel), according to A.Neill, the name derives instead from ἀστήρ astér astro, star and from γάλα gála latte, due to the shape and color of the flower and because it was believed to increase the milk production of the goats that feed on it, as well as the common English name Milk vetch would seem to confirm).
The specific epithet microcephalus comes from the Greek μικρός micrós small and from κεφαλή cephalé head: reference to the smallness of the flower heads.

Geographical Distribution and Habitat –
Astragalus microcephalus is a plant native to the western area of ​​Asia where it is found especially between Iraq and Turkey.
Its habitat is that of the slopes of rocky mountains, where it grows between 1200 and 2600 meters above sea level.

Description –
Astragalus microcephalus is a deciduous shrub that grows up to 0.5 m.
It is a hermaphrodite species (with both male and female organs) and is pollinated by bees, lepidoptera (moths and butterflies).
The flowers are gathered in axillary racemes, dirty white in color, with bracts.

Cultivation –
The Astragalus microcephalus, like other legumes, can fix atmospheric nitrogen by means of radical tubercles.
It is a plant that grows well in light (sandy) or medium-clayey soils as long as they are well drained.
The suitable pH is that of neutral or slightly alkaline soils while the optimal exposure is sunny and prefers dry soil.

Uses and Traditions –
Astragalus microcephalus, like many members of this genus, contains toxic glycosides. The plant can also accumulate toxic levels of selenium if grown in relatively rich soils.
This species, like other similar ones, is a rich source of flavonoids. Flavonoids in this genus include flavonols, flavones, flavonones and isoflavonoids which have many types of bioactivity. In addition, some special flavonoids were obtained, such as sulfuretin, isoliquiritigenin and pendulone.
Also from this plant it is possible to obtain the tragacanth gum.
Unfortunately, this plant is threatened as most of the steppe and steppe in central Anatolia, where this plant is also native, has been degraded due to strong pasture, deforestation and intense agricultural activities, in particular in the last thirty years . Heavy grazing causes soil erosion, destruction of natural vegetation and loss of plant diversity and generally also leads to degraded ecosystems. Furthermore, this type of vegetation is strongly influenced by agricultural and viticultural activities on semi-arid soils, deforestation, settlements and urban expansion.

Preparation method –
The uses of this plant were much more frequent among the ancient local populations but, now, also due to the smallness of its presence and the often degraded area where it grows, it is preferable that it is not used and recovered.