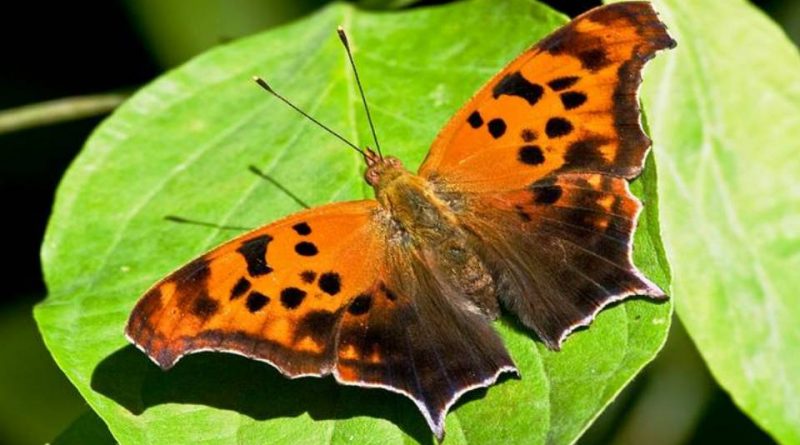 The question mark butterfly (Polygonia interrogationis Fabricius, 1798) is a moth belonging to the Nymphalidae family.

Geographical Distribution and Habitat –
Polygonia interrogationis is a butterfly found in North America; it is observed in southern Canada and throughout the eastern United States with the exception of peninsular Florida, west of the eastern border of the Rocky Mountains, south of southern Arizona and Mexico. It is a migratory butterfly and its habitat is characterized by wooded areas, city parks and, generally, in areas with a combination of trees and open spaces.

Morphology –
Polygonia interrogationis is a butterfly that has a wingspan of 4.5–7.6 cm as an adult.
The upper wings are of an orange base color, with darker fringes and dark brown patches that depart after the margins to become more sparse towards the insect cover.
The color and appearance of the lower part of the wings combine to provide a mimicry that recalls the color of a dead leaf.
The silver mark on the underside of the rear wings is broken into two parts, a curved line and a point, creating a shaped sign? which gives the species its common name.

Aptitude and biological cycle –
Polygonia interrogationis goes through four stages of life, also known as holometabolism or complete metamorphosis.
The four phases are represented by the eggs, larvae (caterpillar), pupa (chrysalis) and the adult (butterfly).
In general, this butterfly flies and lays eggs in the spring until the end of May. Summer adults emerge and fly from May to September, laying eggs that develop in the winter form; these adults appear in late August and spend the winter in various shelters.
The biological cycle begins with the courtship of the male who identifies a female resting on a tree or in the grass and the subsequent mating.
The females lay their eggs individually or stacked under the leaves of plants that are usually not the hosts. Young caterpillars must therefore find their food source to survive.
The caterpillars of this butterfly mature through a series of stages up to the final one where the caterpillar is formed, characterized by a hard external layer consisting of a mixture of chitin and specialized proteins.
Once they have gone through all the stages of maturation, the caterpillars become unscrupulous.
Unlike many Lepidoptera, who build cocoons in which to pupate, most pupae of these butterflies are “naked”, which means that without the protection of the earth or a cocoon to protect them. After it reaches the end of its last stage, it loses its skin (dumb or apolysis), becoming a soft fleshy pupa, in which, on close observation, you can see many parts of the future butterfly before the new hardening of the skin. As it hardens, the pupa takes on the colors of the habitat where it lives, providing excellent mimicry. After several days to a couple of weeks the butterfly emerges, usually in the morning or afternoon.
The flight period of adult butterflies is from May to September.

Ecological role –
Unlike some caterpillars, those of this beautiful butterfly feed on a variety of host plants. The main ones are: American elm (Ulmus americanus), red elm (Ulmus rubra), hackberry (Celtis), Japanese hop (Humulus japonicus), nettles (Urtica) and false nettle (Boehmeria cylindrica).
The adult butterfly feeds on rotting fruit, tree sap, dung or carrion.
Only when these are not available does this butterfly visit the flowers for nectar. This dietary adaptation is particularly advantageous in the late spring period – wintering and spring hatching period when the sources of nectar can be limited.