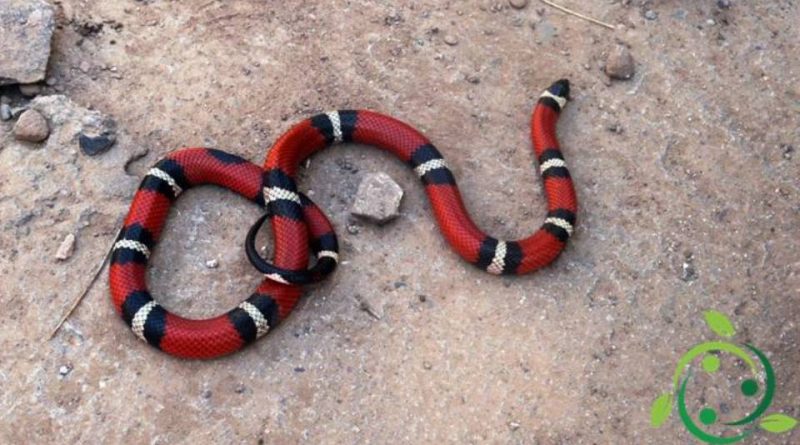 The term Mertensian mimicry refers to a form of mimicry which in its interpretation is rather complicated and which is not universally accepted by all biologists.
Mertensian mimicry was first discovered by W. Wickler who suggested this nickname in honor of the naturalist R. Mertens, a naturalist who thoroughly studied the coral snakes of central and southern America, animals in which this mimetic phenomenon has been frequently found.
The name “coral snakes” given to these reptiles is due to their showy livery formed by alternating bands of red, black and yellow.
These ophidians belong to two different families, the Elapidae, poisonous and often lethal, and the Colubridae, harmless.
Specifically, a Mertensian mimetic ring consists of three or more components.
In the simplest situation there are two mimes and one model only:

– a) an palatable colubrid (mime);
– b) a deadly elapid (mime);
– c) a moderately poisonous elapid (model).
The species’ b ”despite being protected cannot represent the model, as its predator cannot be able to experience it since it usually dies after attacking the prey. Likewise, even the species “a”, as harmless, would have nothing to “teach” the predator to avoid it.
So it is the species “c”, moderately poisonous, to have the best requirements to represent the model for both mimes.
It is interesting to observe how a Batesian mimicry is established between the “a” and “c” species, while a Müllerian mimicry occurs between the various “c” species and between the “b” and “c” species a Mertensian-type mimicry.
It is evident that as in Batesian mimicry, also in this case, it is important that the model is numerically predominant on the two mimes.