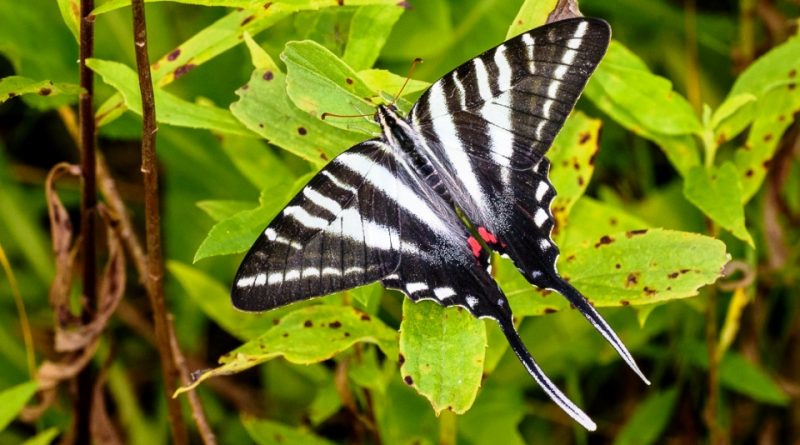 The zebra swallowtail (Protographium marcellus Cramer, 1777) is a butterfly belonging to the Papilionidae family.

Geographical Distribution and Habitat –
The Zebra swallowtail is a moth native to the eastern United States and southeastern Canada.
It is a species closely related to Asimina triloba plants, so much so that they are rarely found far from these trees. The caterpillars feed on the leaves of various papaya species, while the adults feed on nectar of flowers and minerals that they extract from the moist soil.

Morphology –
The Protographium marcellus is a butterfly with a wingspan ranging from 6.4 to 10.4 cm which, with their black and white striped pattern, resembles a zebra.
The wings are triangular in shape with a white to greenish white color with black longitudinal stripes. At the hind legs, from the wings, two sword-shaped tails extend. The inner margin of the rear wings has two blue dots on the corner and a red dot near the body. In addition, a red stripe runs along the center of the ventral posterior part.
This moth has two seasonal forms, one in spring and the other in summer. The spring forms are smaller, whiter and have short black tails with white tips. Summer forms are larger, have wider black stripes and longer black tails with white edges.
The caterpillars have an enlarged shape in the front, with two forms, one with green and yellow striped coloring and one, more rare, with black and white and orange striped coloring. In both forms, between the thorax and the abdomen, there is a yellow, black and bluish-white band.
The egg is round in shape, pale green in color which then turns brown orange.
The chrysalis are green or brown in color and are more compact than the chrysalis of the genus Papilio. Three small horns protrude from the head and thorax.

Aptitude and biological cycle –
The females lay their eggs individually on papaya leaves or on tree trunks.
It has two depositions to the north and three or four to the south, with the first most numerous.
The young caterpillars are black with lighter transverse stripes.
The larvae have a yellow, stinking, forked gland called osmeterium which it uses to discourage predators, especially spiders and ants.
The chrysalis hibernates in areas of its range with cold winters.
The Zebra swallowtail can be observed in the period from late March to August in the northern part of its growth range and from February to December in the southern part.
The males of Protographium marcellus move close to the host plants in search of females, flying quickly and in a straight way at a height varying from 0.5 to 1.8 meters above the ground. Females fly more slowly while searching for suitable host plants.

Ecological role –
Both males and females visit the flowers of species such as those of the families of: Apocynaceae, Brassicaceae, Fabaceae, Lythraceae, Polemoniaceae and Rosaceae.
Males have a behavior that leads them to gather on sand, gravel or moist soil to obtain salts and amino acids. These nutrients help the male to reproduce.
Other food sources include rotting fruit and urine.
The caterpillar feeds only on species of the genus Asimina. The species commonly visited are: A. angustifolia, A. incana, A. parviflora, A. reticulata, A. tetramera and A. triloba.
The caterpillars of Protographium marcellus ingest chemicals called annonaceous acetogenins from their host plants, which are retained in the body tissues of the caterpillar and the adult and can help chemically protect the butterfly from birds.
This moth is the butterfly symbol of the state of Tennessee.