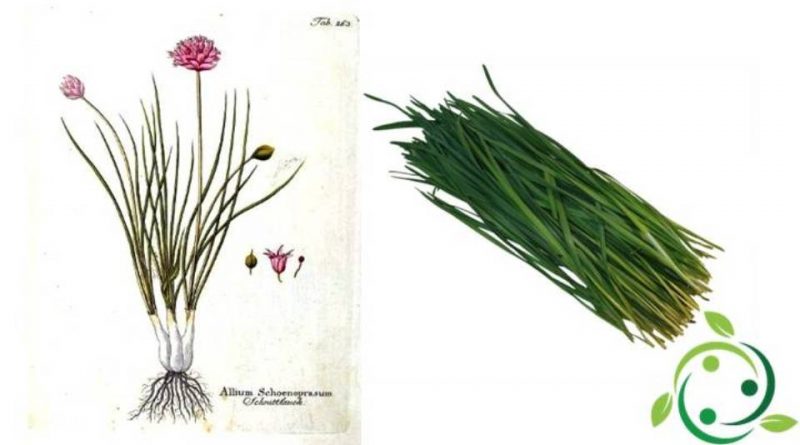 Origins and History –
Chives are a plant with always fragrant and very aromatic leaves, with a taste similar to that of onion but more delicate.
This species is native to North America, Europe and Asia, is spontaneous in most of the heights of these continents and has been cultivated since the 16th century.
Its use is somewhat remote so that even Apicius recommended it in some of his recipes.
In ancient Rome, where it was widely used, it was also considered a remedy for baldness.
However, it is necessary to arrive in the Middle Ages for chives to begin to be cultivated and used in a systematic and growing way.
The Celtic peoples attributed magical properties to it, rubbing the whole plant removed any evil eye or spell operated by the “bad gnomes” of the forests.
The main component of chives is an onion-type essential oil, and has digestive, antiseptic, laxative, cardiotonic and stimulant properties.
Its culinary uses are innumerable: in sauces, eggs, omelettes, savory pies, soft cheeses, soups and sauces.

Description –
Chives are a perennial plant of the Liliaceae family, small in size, geophyte with a bearing habit, characterized by the onion aroma present in all the green parts of the plant.
The bulb is small in size (approximately 2 cm), it is made up of small cylindrical elongated cylindrical bulbs that develop upwards, in the lower part the bulbs emit white roots.
The leaves are green, narrow and hollow; I reach a height of about 25 cm.
Flowering occurs during the summer, on the apex of the stems umbrella-like inflorescences are formed, composed of small pink-lilac flowers, more rarely white.

Properties and Uses –
Chives are a plant that ripens in the months of April and May.
Chives are used for the leaves, fragrant and crunchy, which can be harvested all year round by cutting them at the base; they are eaten fresh, but they can also be frozen; the important thing is not to dry them, as they would lose all the nutritional properties, as well as the flavor.
Chives stimulate appetite and the production of gastric juices. It is attributed with purifying and antiseptic properties. It is considered a real cure-all for the heart and, thanks to its cardiotonic and blood-stimulating qualities, it has acquired a reputation as an aphrodisiac plant.
Finally, chives help fight constipation thanks to its laxative properties, especially if taken in the form of an infusion.
It is known and used in herbal medicine as an antiscorbutic (fights scurvy with the presence of vitamins), antiseptic (property of preventing or slowing the development of microbes), callifugo, hypoglycemic (decreases blood glucose), cicatrizant (accelerates the healing of wounds ) and wormer (eliminates intestinal worms).
It is a low-calorie food, low in fat but rich in vitamins and minerals. In particular, it has a high content of vitamin C, which thanks to its antioxidant properties, strengthens the body’s immune defenses. In addition, it contains a high amount of potassium, which helps keep blood pressure under control. The plant is also rich in fiber, which facilitate the functioning of the intestine, counteract constipation and promote the regular absorption of cholesterol and sugars, helping to fight hypercholesterolemia and hypoglycaemia. Chives also have folate, which promote the correct development of the nervous system during pregnancy. Finally, it contains vitamin K, which promotes good blood clotting.
The consumption of chives does not generally cause side effects. However, if consumed in excessive quantities, it could cause stomach irritation.
As for its consumption, there are no interactions with the intake of drugs or other substances. If in doubt, we recommend that you ask your doctor for information.

Preparations –
Chives are appreciated in the kitchen for the aroma that resembles that of onion, can be eaten fresh or cut into rings and stored in the freezer in plastic bags.
To keep it for a long time, it can be frozen in order to have it available when needed. There is also commercially available dehydrated chives already chopped, practical to use and preserve, but less tasty than fresh. A good idea is to grow it indoors.
In any case, it is recommended to use chives almost exclusively fresh as it has a mild aroma that is easily lost. To best propose it, cooks keep it as a plant and use it only when it is actually used, quickly rinsing it and chopping it with scissors. It garnishes and emphasizes the taste of crêpes, sauces, flavored butters, salads and soups, but can also accompany fish. Thanks to its elasticity it is also used to tie small bundle-shaped preparations, such as crêpes, or bunches of boiled vegetables and accompanied by sauces, such as asparagus, or bresaola rolls with herbs. It is typical of French cuisine, but it is also widespread in Italy. Green leaves are excellent in soups, sauces and salads.
Chives are very versatile in the kitchen, among its main uses there are soups and minestrone to which they give a warm and enveloping aroma. No less successful pairing with eggs, especially in omelettes, omelets and crepes. However, it is also good in the egg-free variant of the omelette, the farifrittata, prepared with chickpea flour. It becomes a greedy ingredient for accompanying sauces, as well as for sauces with which to season pasta dishes. If you want an idea for a ready-made appetizer, mix fresh ricotta or robiola with chives and spread the mixture you will get on a toasted crouton. If you don’t eat animal products, know that it is also suitable for flavoring tofu dishes.
You can prepare the classic risotto alla parmigiana and just before serving add some chives, it will be a success. Another tasty idea is to flavor the butter, just mix them together when the butter is soft. In the same way it can be used to flavor mashed potatoes or simple boiled potatoes and is excellent in both meat and fish tartare.