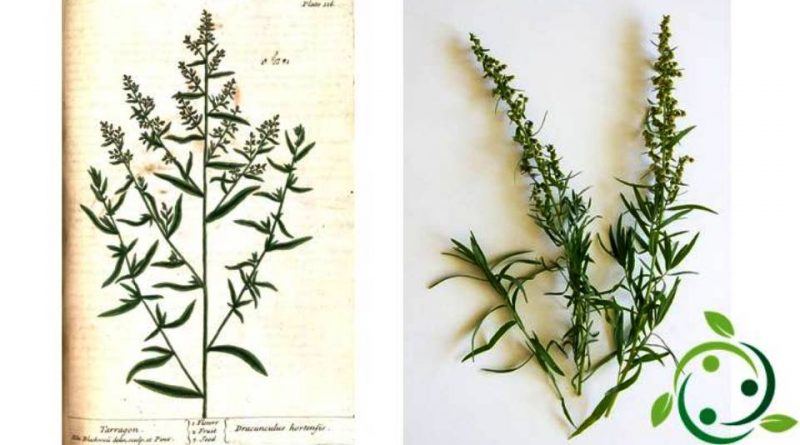 Tarragon or estragon (Artemisia dracunculus, L.) is a perennial herbaceous species, used as a spice for its aromatic and spicy properties.

Origins and History –
Tarragon is an aromatic plant appreciated for its strong anise-like aroma and spicy, slightly acrid flavor.
There are two main varieties of tarragon, the French one with more pronounced aromatic properties and the Russian one, less fragrant.
It was nicknamed dragunculus (small dragon) perhaps because someone seemed to see something of the mythical animal in the form of its bush. Others assume that the name derives from the fact that in ancient times it was believed that the plant had the power to heal people from the bites of poisonous animals. Some argue that the name tarragon may also derive from the shape of its roots. These in fact somehow resemble a tangle of dragon tails or, even, the flames released by them.
Tarragon is native to Eastern Europe, can reach one meter in height and has a bitter and pungent taste. In our peninsula it grows spontaneously in sunny places characterized by fertile soils.
It is not only a spice but also a powerful medicine. In France, thanks to its therapeutic properties, it is even called the king of herbs.
Due to its property of restoring menstrual flow, this plant is said to have been called more generically also “mugwort” in honor of Diana Artemide.
Tarragon, originally from southern Russia and Siberia, was known and appreciated by the Arabs who helped bring it to the Mediterranean area.
Different the theses on its diffusion in Italy: according to one of these the tarragon arrived following the crusades, the other, supported by the Sienese, says that the tarragon arrived in Tuscany in 774 following Charlemagne, where it was planted and cultivated in the garden of the Abbey of S.Antimo.
However, thanks to its intestinal and digestive anti-fermentative therapeutic properties, with the term “dragon, draco, draconium” it is already well present in medieval medical texts. Instead, it seems that as a gastronomic ingredient it was mentioned for the first time only around the 16th century by Messisbugo.
Currently in Italy, tarragon is not widely used, although fresh and chopped it is excellent in salads and gives a particular taste to the oil and vinegar in which it is macerated. Unfortunately, the ancient Sienese preparation of a tarragon sauce, garlic and breadcrumbs soaked in vinegar, made to accompany boiled beef and chicken, is also disappearing.
In France, tarragon is a very popular herb, to the point of being included in omelets or associated with chicken, soups, flavored butter, mushrooms and certain types of mustard.
According to some phytotherapists, tarragon is excellent for those who want to limit salt in the diet. According to experts, this herb can also replace pepper and vinegar in salads.

Description –
Tarragon is a herbaceous plant with a stem that forms bushes that can reach a height of about one meter.
The flowers are small and yellowish-green in color, gathered in panicle-shaped inflorescences.
The leaves are thin, shiny and dark green in color.
The fruit is dark in color and is 1-2 millimeters large.
The seeds are generally sterile.

Properties and Uses –
Tarragon or estragon is an aromatic, bitter, spicy herb belonging to the Asteraceae family, also known as “dragon”, “tarfone”, “tragone”, “serpentaria”.
This plant is grown in western Europe for its gastronomic uses. Leaves and flowers are collected in the warmer months. It is widely used in Tuscan and French cuisine to flavor fish, eggs and other dishes. It is one of the main components of the Bernese sauce that is used to flavor grilled meat.
Tarragon is a plant with therapeutic properties already known since ancient times, its benefits are particularly useful for the health of the digestive system, it also has an analgesic effect.
In aromatherapy, tarragon essential oil is used to solve the problems of insomnia and nervousness. These properties are due to the presence of eugenol and limonene.
Among the various curative uses we mention:
– Digestive and Carminative; it is used as a mild sedative to treat stomach pain, to help the digestive process and to eliminate intestinal gas. These properties are attributable to the presence of monoterpenes and flavonoids which stimulate the production of gastric juices. The oils present in the grass, thanks to the action of the carotenoids, favor the digestive process. According to studies, the spice can be helpful in all stages of the digestive process. From the secretion of saliva to the production of gastric juices up to the peristaltic movement in the intestine. Most of these benefits are due to the presence of carotenoids. An Irish study looked at the effects on digestion of herbs that contain carotenoids. The results confirmed that these herbs favor the intake of bioaccessible carotenoids. This property improves the health of the digestive system.
– Ulcer and Gastritis; it has a good content of nerol, an effective constituent in the treatment of gastritis. The compound is able to counteract the H. bacterium. pylori and has anti ulcer properties.
– Toothache; in popular tradition its fresh leaves have been used as a home remedy to treat toothache. The pain relieving effect is due to the high levels of eugenol, an anesthetic compound present in the plant. The coumarin content of this herb also has analgesic properties. Its roots applied on aching teeth are able to soothe the pain.
– Stimulates appetite; the infusion is also used to stimulate appetite and, in women, to promote menstrual flow. The infusion is prepared by boiling for a short time a spoonful of dried tarragon leaves in the equivalent of a cup of water.
– Purifying; tarragon herbal tea is instead recommended to combat parasites in the intestine. It also has purifying properties against liver and kidneys.
– Antibacterial; there are scientific studies showing that its essential oil is able to inhibit bacterial growth in food and to disinfect wounds. A study conducted in Iran has shown the plant’s antibacterial activity against two dangerous bacteria. One is Staphylococcus aureus and the other is Escherichia coli. The study not only showed that essential oil can kill bacteria but it is also an excellent natural preservative. An American study has shown that its essential oil has positive effects in the treatment of excessive intestinal bacterial proliferation.
– Bad breath; thanks to its ability to eliminate bacteria, the plant can also be used to stem bad breath problems.
– Liquify the Blood; the estragol has antiplatelet properties, thinning the blood and promoting circulation. Studies have confirmed that this characteristic of the plant is useful for the treatment of thrombosis and for the prevention of cardiovascular diseases. It should not be taken by those who take anticoagulant drugs.
– Glycemia and Insulin Sensitivity; insulin is a hormone that helps transport sugar to cells so it can be used for energy. Nutrition and inflammation can lead to insulin resistance, with a consequent increase in blood sugar levels. An animal study suggests that tarragon can improve insulin sensitivity. Researchers have found that taking this spice can reduce blood sugar levels by 20%. Another 2016 study of 24 people found the beneficial effects of spice on blood sugar levels.
– Inflammation; cytokines are proteins that can play an active role in inflammatory states. A study in mice showed a significant reduction in cytokines after consuming tarragon extract for 21 days.
Among the contraindications, remember that at normal doses, tarragon has no particular contraindications. In some people particularly sensitive to estragol it can cause skin irritation. It is also not recommended for pregnant women due to the presence of thujone which can have abortive effects.

Preparations –
Thanks to the aromatic properties of tarragon, this plant is used in the kitchen for the preparation of dishes based on meat, fish, cheese and vegetables. Its wide use is due to its ability to enhance the flavor of most foods. In this regard, it is good to underline the fact that the aroma of tarragon is enhanced by the heat of cooking.
Fresh tarragon has a sweet taste and an intense aroma similar to that of anise and licorice.
Among its practical uses, it is enough to chew fresh leaves to produce an anesthetic effect on the taste buds. This effect can facilitate the intake of syrups or medicines with an unpleasant taste.
Usually the leaves are used through an infusion. The roots relieve sore throat and the infusion of leaves stimulates the appetite.
For the preparation of the herbal tea 15 grams of dry leaves and half a liter of boiling water are needed. The leaves are left to infuse in boiling water for about 15 minutes. Then everything is filtered and 2 cups a day are drunk. One just awake and the other before going to bed for the night.