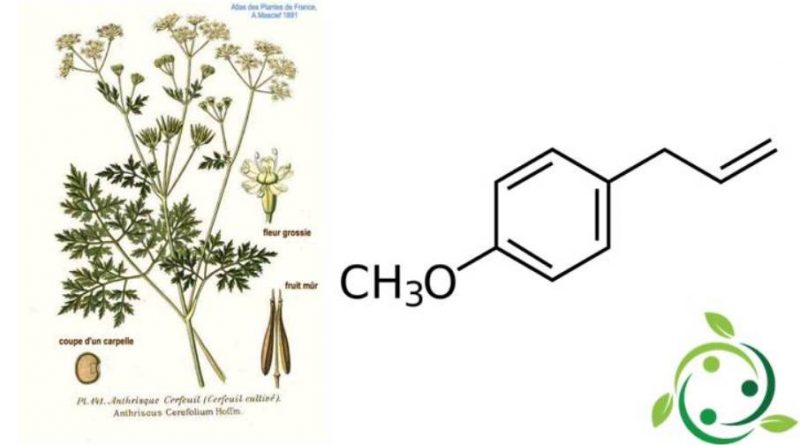 The estragole or p-allylanisole or methyl-caviculus, whose term in the official IUPAC nomenclature is: 1-allyl-4-methoxybenzene is a phenylpropene with brute or molecular formula: C10H12O.
Estragolo is an organic compound of natural origin that is found in some plants.
Estragole is an important constituent of tarragon essential oil, of which it makes up 60–75% of the oil but is also found in the essential oils of basil (23–88%), pine, turpentine, fennel, anise (2%), Syzygium anisatum and other plants.
This compound is used in the perfume industry and as a food additive.
In 2011 a study published by INRAN (National Research Institute for Food and Nutrition) warned of the use of fennel-based herbal teas, stating that they could be harmful, if not carcinogenic, due to the content of estragole present in seeds.
The study had been conducted on three types of fennel-based products (loose seeds, soluble herbal teas and sachets) and from the data obtained, the researchers claimed that the levels of estragole were too high to be considered safe for health.

These data have created a strong alarmism and confusion, especially since the fennel herbal teas have always been recommended to reduce colic in the newborn and to encourage the production of breast milk.
Following the proliferation of alarming news on fennel seeds, the Careggi Integrative Medicine Center (FI) has documented with literature and targeted research that not only fennel seeds are not considered carcinogenic and harmful to health. , but moreover the study shows the presence, inside them, of different substances that have anticarcinogenic action and that are present in greater quantities than the content in estragole.
Among other things, estragole, a substance present in traces inside fennel seeds, is contained, as mentioned, in other plants to which no toxicity has ever been attributed to create alarm or precise precautions in use.
Furthermore, in order to be toxic, the estragol must be taken pure and directly into the vein.