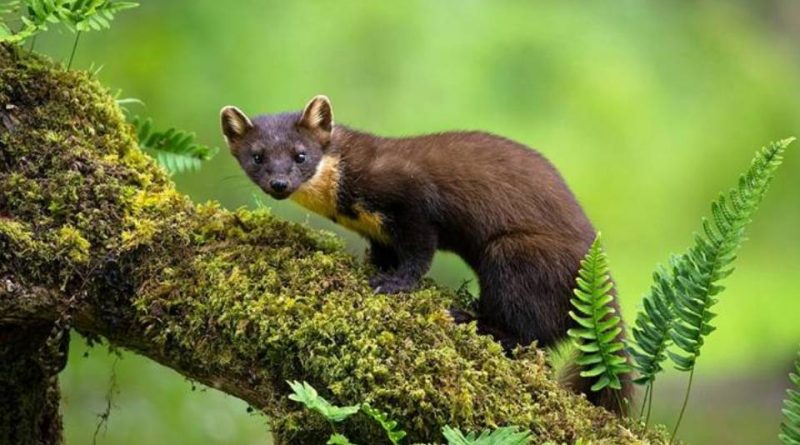 The marten, also known as the Eurasian marten (Martes martes Linnaeus, 1758) is a mammal belonging to the Mustelidae family.

Systematic –
From a systematic point of view it belongs to the Eukaryota Domain, Animalia Kingdom, Phylum Chordata, Mammalia Class, Laurasiatheria Superorder, Carnivorous Order, Family Mustelidae and therefore to the Genus Martes and to the Species M. martes.

Geographical Distribution and Habitat –
The marten is a carnivorous mammal that lives in the forest areas of the western Palearctic region: it extends its range over all of Europe from Ireland and northern Spain to southern Italy, up to the northern Balkans, and at the limit of tree vegetation in Scandinavia and Northern Finland; it is also widespread from Asia Minor and Iran to northern Russia and western Siberia. It is absent in Greece with the exception of the island of Corfu, but it is present in some islands of the Mediterranean Sea: Menorca, Majorca, Corsica, Sardinia, Sicily and Elba.
In Italy it is widespread in hill and mountain areas with a fragmented distribution. However, its distribution is increasing, even in lowland areas, as evidenced by the discovery of a male invested just two kilometers from the city of Crema in August 2012. It was also spotted in Porto Viro on January 26, 2019. the origin of the marten in Italy and Sicily is traced back to the late Pleistocene, while the origin in Elba and Sardinia is uncertain. It is believed that in these two islands the introduction of the marten was made by man in prehistoric times, but there is not enough information about it.
Its habitat is preferably that of large trees with a large extension and little undergrowth, whether they are conifers, broad-leaved or mixed, from the plains to the mountains, where it goes up to 2,000 m a.s.l. It is also present in very dense scrub areas, while it is generally absent from areas without tree cover and avoids human settlements and the surrounding areas, although in particular circumstances it can be approached.
In fact, in general, however, she prefers dense vegetation, capable of offering adequate protection and avoids open spaces; only in times of food constraints does it go to farms to prey on domestic birds above all.
The presence of the species in Sardinia and Elba, where it inhabits dense Mediterranean maquis even in the absence of tall trees, confirms a certain ecological plasticity. 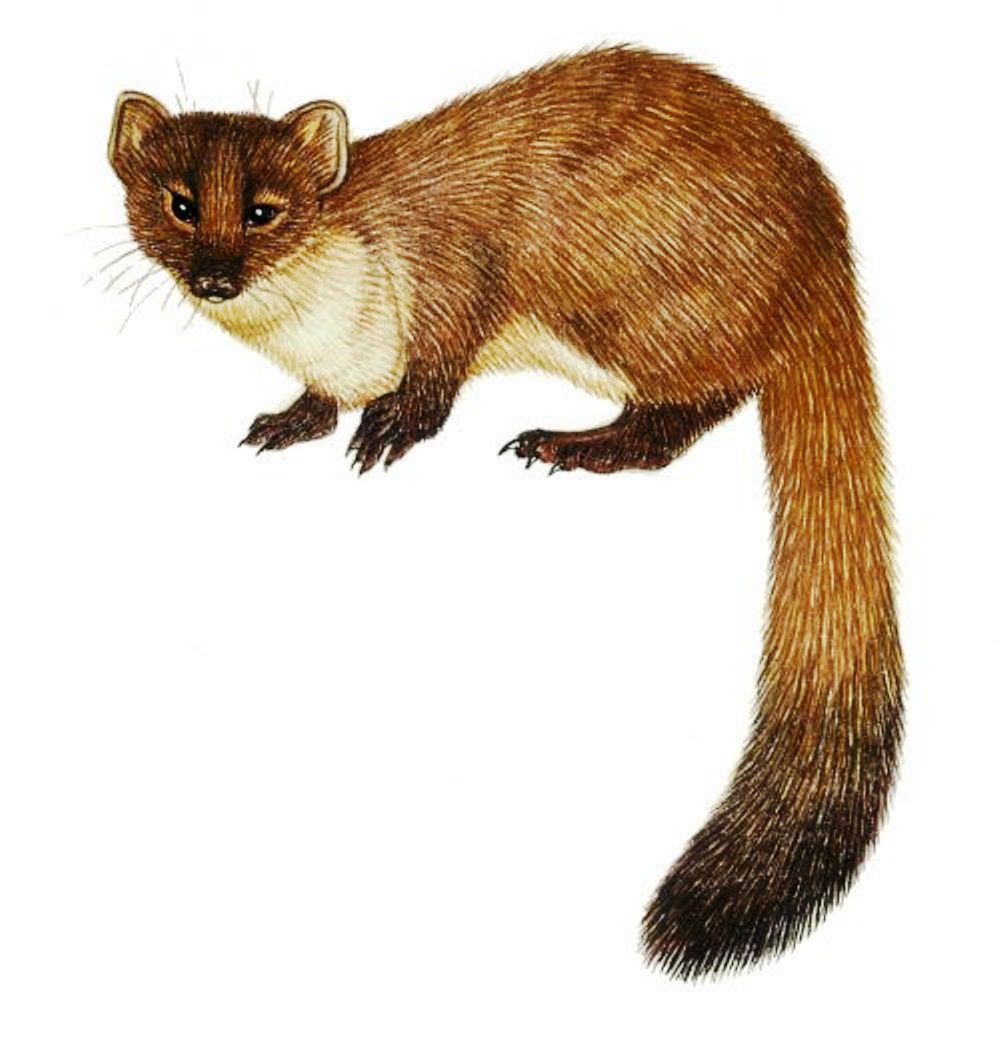 Description –
The marten is a mammal with a slender body shape, relatively short limbs and pointed muzzle, typical of mustelids.
It has a length, between head and body, of 43-50 cm; the tail is around 22-25cm long; the shoulder height is 15 cm and the weight fluctuates on average between 1 and 1.8 kg.
The dominant color of the fur which is characterized by a thick, soft and shiny coat is bright brown, while the throat and the front of the chest appear yellowish.

Biology –
Martes martes is a mammal whose reproductive period falls in June-August.
It reproduces once a year, with a gestation that lasts up to 259-285 days due to a temporary arrest of the development of the fertilized egg. The implantation into the uterine mucosa takes place only 220-240 days after mating, after which embryonic development takes place very quickly (27-45 days).
The babies, between 3 and 5, are brought to light in the following spring, between March and May, and are cared for only by the mother making themselves independent in the third month.
Breastfeeding lasts about 6-8 weeks and the average life is around 10-12 years.

Ecological role –
The marten is an animal with a nocturnal habit and usually hunts at sunset by moving both on the ground and on the trees.
It is a solitary animal and nocturnal habits; during the day it takes refuge in the vegetation, preferably in the crown of the trees. It preferably establishes its shelters on trees that have natural cavities or dug by other animals. Very agile, it is able to move quickly on the crowns of trees even making long jumps.
The social structure is based on the rigid territoriality of both males and females. In addition to being solitary, males delimit their territory by defending it from the intrusions of individuals of the same species and of the same sex. The territory of a male generally coincides with that of one or more females. Young people of the same sex are tolerated until shortly before reaching sexual maturity and no later than 18 months.
The Marten, with its predatory activity, feeds on small vertebrates, especially birds, but also rodents and lagomorphs. Integrate your diet with invertebrates and fruit. The popular belief that it habitually, after having attacked the prey, immediately cuts the carotid artery to drink its blood, is wrong.
Due to the rigid territoriality of this species, the main threats to the marten come from the reduction and fragmentation of forest habitats due to deforestation, fires and excessive human penetration. There is insufficient information on the Italian population, but it is believed that there has been a decline precisely because of the smaller extension of its natural habitat. In recent years there have been numerous sightings in Molise, where cars often fall victim to driveways.
Although at the moment it is not yet considered an endangered species at national and European level, in Sardinia it is classified as a rare species.
For effective protection of the species, the conservation of mature forest environments is a priority, also through management aimed at the reconversion of large woodland areas. The particular biology of the species, which has a very rigid territoriality and consequently particularly low densities, makes it essential to plan any conservation intervention on a landscape scale. Furthermore, the marten cannot be hunted in Italy (Law 157/92), it is included among the species protected by the Berne Convention (Annex II) and is listed in appendix V of the Habitat directive (92/43 / EEC). It is included in protected areas and is assessed Least Concern by the European Mammal Assessment (Temple & Terry 2007).