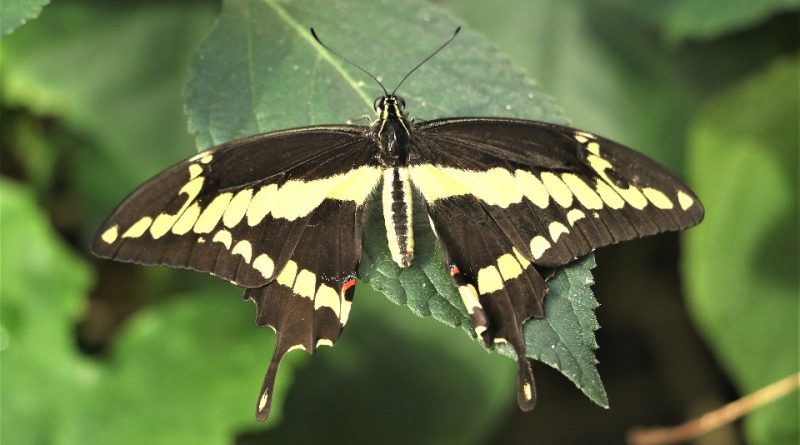 The king swallowtail (Papilio thoas Linnaeus, 1771) is a moth belonging to the Papilionidae family.

Geographical Distribution and Habitat –
The Papilio thoas is a butterfly that lives in an area between the southernmost United States, Mexico, Central America and South America, up to Argentina and Uruguay.

Morphology –
The king swallowtail is recognized for having a wingspan ranging from 10 to 13 cm.
The upper surface of the wings is characterized by yellow square spots arranged in a diagonal band.
The caterpillar has a mimetic appearance, similar to an excrement of birds, which probably serves to deceive possible predators, it also moves very little and its movement is almost imperceptible, to avoid attracting the attention of predators such as wasps.

Aptitude and biological cycle –
The caterpillars of Papilio thoas feed on the leaves of Rutaceae (citrus) and also on some plants of the genus Piper.
Adults, however, who are present throughout the year in the tropical area, feed on the nectar of a variety of flowers, including Lantana, Stachytarpheta and Bougainvillea.
Further north, the biological cycle is such that this butterfly, in the adult stage, is present from April to July, based on latitude.
In the southern hemisphere, however, it flies in the corresponding months of spring and summer.

Ecological role –
Papilio thoas, in the adult stage, plays an important role in pollinating plants of the genus Lantana, Stachytarpheta, Bougainvillea and other plants.