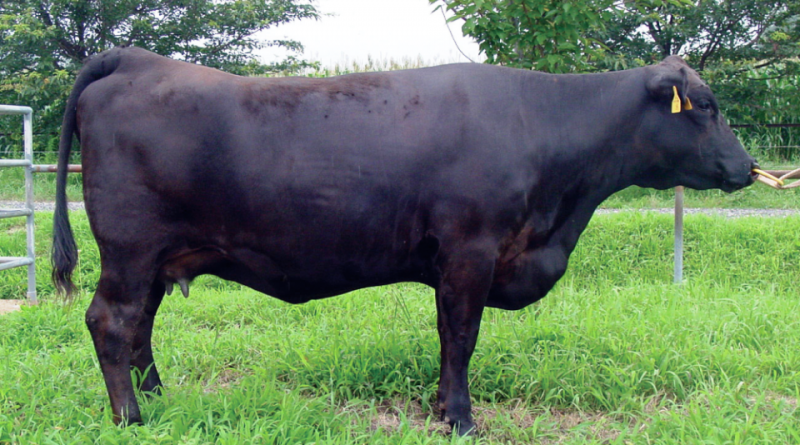 The Japanese Black is a bovine breed (Bos taurus Linnaeus, 1758) that originated in the south-west of Japan, with an aptitude for the production of meat.

Geographical and Area Distribution –
The Japanese Black is a bovine breed originating in Japan where it originated from cattle from China, with subsequent crossbreeds, and bred mainly in Japan.

Origins and History –
The Japanese Black (Japanese: 黒 毛 和 種, Kuroge Washu) is a breed of beef cattle that originated in Japan.
This breed is one of the six native Japanese cattle breeds and one of the four Japanese breeds known by the name of wagyū; the other breeds are the Japanese Brown, the Japanese acorna and the Japanese Shorthorn.
All wagyū cattle derive from breeding crossings that took place at the beginning of the twentieth century between indigenous Japanese cattle with imported cattle, mainly from Europe.
The Japanese black breed, in particular, is the result of crossbreeding with European breeds including Braunvieh, Shorthorn, Devon, Simmental, Ayrshire and Holstein.
The history of cattle present in Japan dates back to the period of the second century AD, which corresponds to the Yayoi period; we are in the period of rice cultivation and the cattle were imported into Japan from China.
Subsequently, until the Meiji Restoration period in 1868, these cattle were used exclusively as draft animals, in agriculture, forestry, in mines and for transport but also as a source of organic matter for the fields.
The reason for this use exclusively for cattle work lies in the fact that the consumption of milk was unknown and, for cultural and religious reasons, the meat was not consumed. Among other things, cattle were highly valued and valuable and too expensive to be purchased by a poor farmer.
These cattle remained genetically unchanged for a long time as Japan remained isolated from the rest of the world from 1635 to 1854; period in which there was no possibility of introduction of foreign genes in the bovine population.
We must wait until 1868, the year of the Meiji Restoration and 1887, when about 2600 foreign cattle were imported. Initially there was little interest in the cross breeding of these with native strains, but starting in 1900 the practice became widespread.
The crossing of these cattle with foreign breeds however stopped abruptly in 1910, when it was realized that, although the cross breeds could be bigger and have better dairy qualities, their working capacity and the quality of the meat were lower .
It should be noted that since 1919, the heterogeneous regional populations resulting from this short period of crossbreeding were registered and selected as “improved Japanese cattle”.
However, four separate strains were considered, based primarily on the type of foreign cattle that had most influenced the hybrids, and were recognized as breeds in 1944.
These, in fact, were the four wagyū breeds, the Japanese Black, the Japanese Brown, the Japanese acorna and the Japanese Shorthorn.
The Japanese Black breed developed in southwest Japan, in the prefectures of Kyoto and Hyogo in the Kansai region; Hiroshima, Okayama, Shimane, Tottori and Yamaguchi in the Chūgoku region; of Kagoshima and Oita on the island of Kyūshū; and Ehime on the island of Shikoku.
Among the European breeds that influenced the formation of the Japanese Black we find Braunvieh and Simmental cattle from Switzerland, Ayrshire, Devon and Shorthorn from the United Kingdom and Holstein cattle from Germany and the Netherlands.
In 1960 the total population of the breed was over 1,800,000 heads. In 2008, a census was reported stating about 707,000 leaders.
In addition, in 1999, the Japanese Black breed constituted about 93% of the Japanese cattle herds.
It should be noted that when the registration of the “improved Japanese cattle” began in 1919, there were considerable variations among the regional populations.
At that time it was left to the administration of the prefecture to decide the objectives of the breed. Thus it was that several strains or subtypes developed with the Japanese black population.
One of them is the Tajima strain (Japanese: 但 馬 牛, Tajima Ushi or Tajima-gyu). Only meat from animals of this strain, bred only in Hyōgo prefecture, can be approved for marketing as Kobe beef.

Morphology –
The Japanese Black is a bovine breed characterized by the presence of a fairly uniform black coat over the whole body.
The height at the withers varies on average between 120 and 140 cm, with the males having a prevalent height around 145 cm and the females around 129 cm.
The weight is 900-1,000 kg for bulls and 500-600 kg for cows.
These animals have horns and have a pigmented muzzle.

Productive attitude –
The Japanese Black, although originally used as working cattle, over time, also through the various crosses and selections, has turned into a meat breed.
This breed is known for the excellent quality of its meats with splendid marbling.