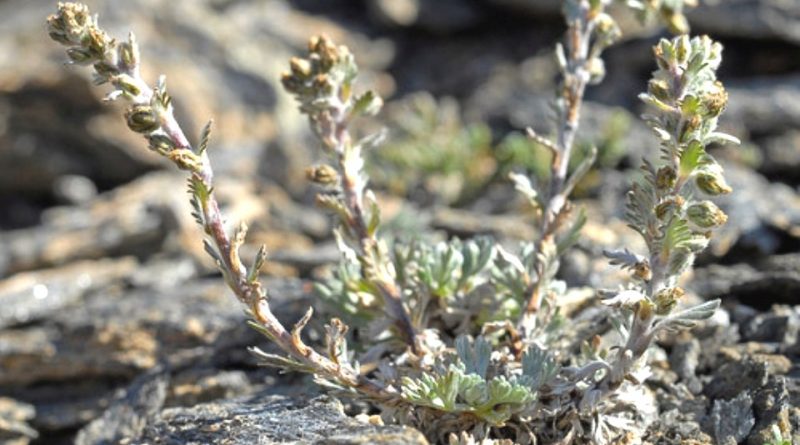 The male Genepì or black Genepì (Artemisia genipi Weber) is a perennial herbaceous species belonging to the Asteraceae family.

Systematic –
From a systematic point of view, it belongs to the Eukaryota Domain, Plantae Kingdom, Magnoliophyta Division, Magnoliopsida Class, Asterales Order, Asteraceae Family, Asteroideae Subfamily, Anthemideae Tribe, Artemisiinae Subtribu and hence to the Genus Artemisia and the Species A. genipi.

Etymology –
The term Artemisia comes from Ἄρτεμις Artemis Artemide, Greek name of the goddess Diana, a genus already mentioned in Pliny; according to some authors, Artemisia II of Caria (Αρτεμισία Artemisía? -350 BC), sister and wife of Mausolus, would have given this plant its name.
The genipi specific epithet comes from the French génépy, a generic term that inhabitants of mountain regions use for various aromatic plants in the Alps.

Geographical Distribution and Habitat –
The male Genepì is a plant that grows in an alpine environment, between moraines, cracks in rocks and macerets, at altitudes between 1500 and 3500 m a.s.l.
Although quite rare, it is found in the Alps, mainly in the western Alps. 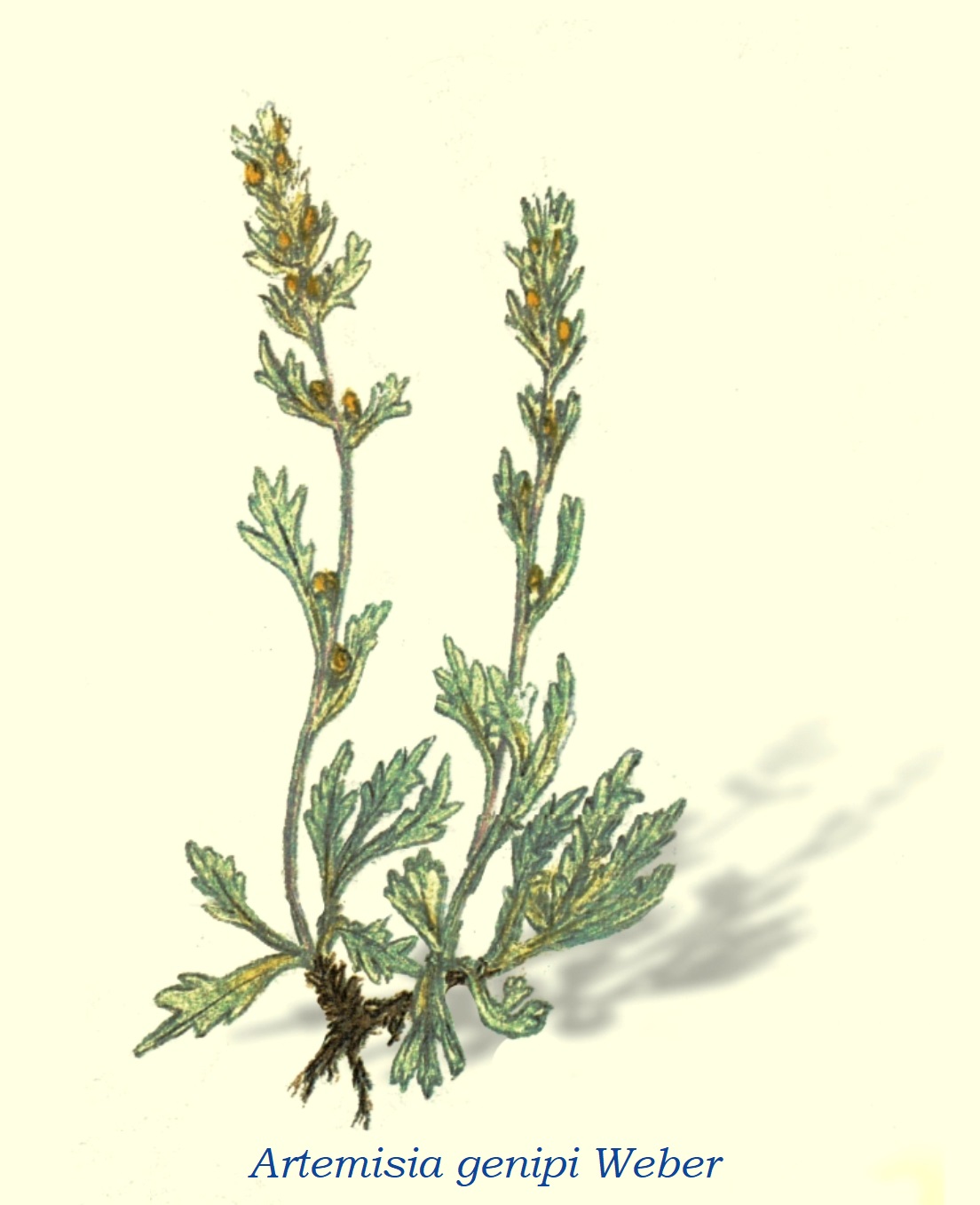 Description –
Artemisia genipi is a perennial herbaceous plant, 5-15 cm high, with a woolly white consistency, which bears simple stems and creeping, erect or ascending branches.
The basal leaves are briefly petiolate and have a spatula, tripartite, with lacinias which are in turn trifurcated.
The flower heads are almost sessile and arranged in dense, more or less elongated spikes.
Each flower head is 5-8 mm wide, ovoid or globular, is made up of 10-20 golden yellow flowers.
The antesis occurs in the period between July and August.

Cultivation –
The male Genepì is a spontaneous plant characteristic of the Alpine regions where it grows clinging between the boulders in small tufts at heights included, as mentioned, between 1500 and 3500 meters.
It is collected for the basic ingredient in the preparation of the Genepì aromatic liqueur.
The male Genepì grows in nature on siliceous-acid soils in scree, moraines, cracks in the rocks; we find it in Italy throughout the Alps, excluding Liguria.
It must be considered that this species has become rare due to the reckless collections of the whole plant, including the root. Being an endangered plant, endemic to the Alps, it is everywhere protected everywhere. For this reason, its collection is absolutely not recommended and its cultivation is hoped for, which is rather easy.

Uses and Traditions –
Artemisia genipi has multiple pharmaceutical properties: young flowering plants, collected at the beginning of flowering and dried in a shady and ventilated place, are used for medicinal purposes. The root can also be used by collecting it in the summer. It has tonic, antispasmodic and diaphoretic properties.
But Artemisia genipi is also used in the kitchen; in fact the properties of genepì and similar varieties are exploited for the bitter principles contained in them which make them excellent for making aperitifs and digestives. They can also be used to combat respiratory diseases
The inhabitants of the mountain areas use the many species of genepì macerating them in grappa to obtain a stomachino liqueur that seems to have the ability to heal altitude sickness. In general, this plant is widely used especially for liquor uses.
It should also be known that some Artemisias contain thuion, a compound that in the past was associated with a specific pathology: absintism. Modern research has reduced the toxicity of the tuione, which, moreover, is contained in small quantities in the wormwood of the Western Alps, characterized by the presence of another terpene, the ocimene oxide. Many Artemisia species contain bitter non-volatile terpenes, such as absintin, a compound capable of being perceived as bitter at homeopathic dilution of 1 mg in 30 liters of water. Even if reduced from a toxicological point of view, the problem of thuion remains from a regulatory point of view, given that the EU has set a maximum limit for its presence in liquors prepared with artemisie (35 mg per liter).

Method of Preparation –
For medicinal purposes, the flowering plant harvested at the beginning of flowering is used and dried in a shady and ventilated place. The root can also be used by collecting it in the summer.
The properties of genepì and similar varieties focus on the bitter principles contained in them which make them excellent for making aperitifs and digestives. In addition, it can be used to combat ailments of the respiratory system
The mountaineers use the many species of genepì by macerating them in grappa obtaining a stomachino liqueur that seems to have the ability to heal altitude sickness.