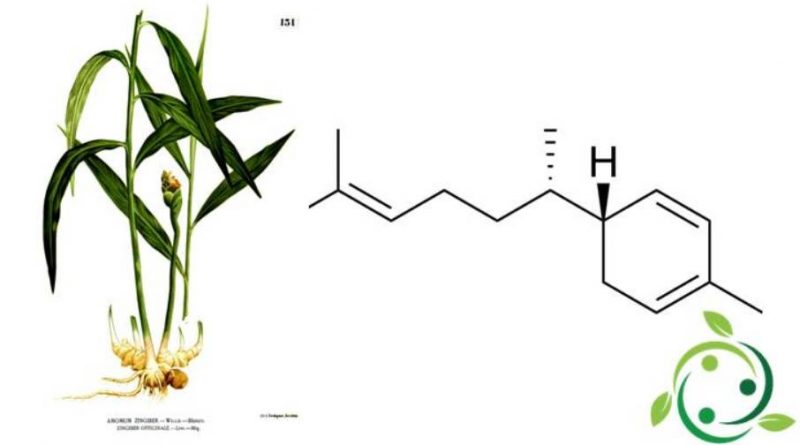 Zingiberene whose term in the IUPAC official nomenclature is: 2-methyl-5- (6-methylpt-5-en-2-il) cyclohexa-1,3-diene is a monocyclic sesquiterpene with brute or molecular formula: C15H24.
Zingiberene is the predominant constituent of the ginger essential oil (Zingiber officinale Roscoe, 1807) from which it takes its name.
This sesquiterpene can contribute up to 30% of the essential oils in the ginger rhizomes and gives the ginger its particular aroma.
Zingiberene, in addition to being the most abundant molecule in ginger oil, is present in a wide range of plant species, including: tomato, basil, turmeric, cardamom and sorghum.

The widespread presence of this molecule in these plants is probably associated with its ability to defend them against parasitic insects; it is probable that this molecule fulfills various roles including that of inducing an interruption in the spawning of these insects, also dissuading them from feeding on the plant.
From a biochemical point of view, zingiberene is formed in the isoprenoid pathway from farnesyl pyrophosphate (FPP).
The FPP undergoes a conversion to give rise to nerolidyl diphosphate. After removing the pyrophosphate, the ring closes leaving a carbocation on the tertiary carbon attached to the ring. After the movement of some hydrides, the formation of zingiberene is obtained, as well as the removal of the cyclic allyl proton and the consequent formation of a double bond.