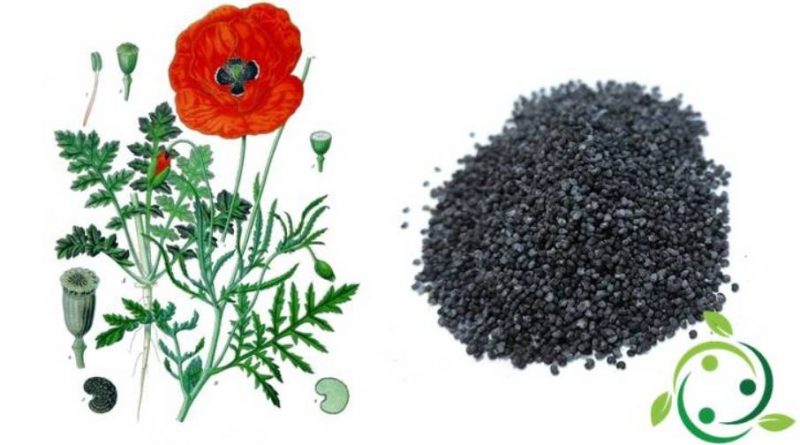 The poppy seeds are obtained from the plants of the genus Papaver L., and in particular, in the Mediterranean areas, from the common poppy or rosolaccio (Papaver rhoeas L.).

Origins and History –
The genus Papaver contains 55 species, of which a dozen are found in Italy. Poppies are thought to originate in an area of ​​the Asian plateau between Pamir and Iran, where in ancient times wheat differentiated, first spontaneously then with the help of man.
Precisely the spread of wheat brought with it the poppy, defined as the ‘synanthropic’ plant, that is, which follows the man in his movements, because it would not spread without the agricultural works that bring to light the seeds sunk in the ground.
Among the Romans, the poppy was so tied to the practices of Ceres, divinity of crops and agriculture, that the goddess was depicted with ears and poppies in her hair and arms.
The consumption of poppy seeds, already mentioned in ancient texts, has been closely associated with the use of the plant in traditional medicine. Although there is still an open discussion about it among archaeologists, it would appear that the poppy plant was already known and used in Sumerian times. The pharmacopoeias of Ancient Egypt and ancient Greece describe the use of different remedies for narcotic and hypnotic activity; these include Papaver somniferum and opium, which would have been introduced into Egypt during the reign of Akhenaten and Tutankamon. In Greek mythology, poppy has often been associated with oblivion and sleep; to demonstrate this, both Hypnos and his son Morpheus were represented with a bundle of poppies in their arms. The use of poppy seeds is also mentioned in many ancient texts and an Egyptian papyrus, dated 1550 BC, mentions poppy seeds for their sedative action.

Description –
Poppy is an annual herbaceous plant belonging to the Papaveraceae family.
The best known species is the common poppy or rosolaccio (Papaver rhoeas L.) which is a messician species whose flowering is visible in the fields of the temperate belt around May.
The rosolaccio is an annual, broad-leaved plant, with pinnate leaves scattered along the stem, up to 80 – 90 cm high, with erect stem, covered with stiff hairs. Cut it emits a white liquid.
The buds are olive green and pendulous. The flower is red with delicate and deciduous petals, often spotted with black at the base in correspondence with the black stamens.
The fruit is a capsule that contains many small, kidney-shaped and cross-linked seeds, which emerge numerous under the stigma.

Active principles –
Poppy seeds are a valuable reserve of manganese, calcium, linoleic acid (Omega 6) and vitamin E.
A spoonful of poppy seed soup contains about 46 kcal, 1.6 g of protein, 3.7 g of fat and 2.5 g of carbohydrates.
Poppy seeds contain few saturated fatty acids while they are rich in polyunsaturated acids and in particular of oleic and linoleic acid; also for their manganese and copper content they can also contribute significantly to the supply of these elements.
They are generally rich in minerals, such as calcium, iron, phosphorus, magnesium, manganese, potassium, copper, selenium, sodium and zinc.
They are also rich in Vitamins, among which we remember: Vitamin B1, Vitamin B2, Niacin, Vitamin C, Vitamin B6, Vitamin E, as well as Pantothenic Acid and Folate.
Also remember that the rosolaccio among the alkaloids it contains, the main one is rhoedina, with mildly sedative properties.

Properties and Uses –
The properties of poppy seeds have long been known and for this reason they have always been used as a natural remedy for anxiety and stress; in fact they have a mild sedative and calming effect on the nervous system.
For this reason, in folk medicine, flowers are also used for sedative herbal teas or for infusions against irritations.
Calcium content is a valuable aid for the health of teeth and bones, especially for menopausal women, while manganese content combats the harmful action of free radicals and helps to keep the blood sugar level under control. Poppy seeds also contain phytosterols that reduce the concentration of cholesterol in the body. The main seeds source of omega 3 and omega 6
Seeds are used in the diet, not only for the oil they offer, but also as a condiment on bread and cakes. The properties of the plant are concentrated both in the leaves and in the petals, they have an emollient, sweating, sedative and slightly hypnotic effect.
Basal rosettes are included in some recipes from the cuisine of the Oltre Pò Pavese, where they are used in omelettes, soups, savory pies and pancakes. The seeds are used on sweets and various pastries.
As mentioned, the rosolaccio contains among the alkaloids, the rhoedina, with mildly sedative properties, in fact an infusion obtained with 4 or 5 petals per cup was traditionally administered to children before bedtime in order to induce them a better sleep. It is important to note that the alkaloids present are mildly toxic, for this reason the usual intake of extracts and infusions obtained from this plant is not recommended, especially for children and the elderly.
In general, the main benefits of using poppy seeds can be listed.
– The unsaturated fatty acids and essential oils present in poppy seeds are good for the heart. In addition to being involved in the process of reducing bad LDL cholesterol, oleic acid and linoleic acid also contribute to increasing the levels of good HDL cholesterol. With these properties, poppy seeds help prevent heart disease such as stroke and heart attacks.
– Vitamin C, together with vitamin E, gives poppy seeds antioxidant properties. These contrast free radicals and slow down the cellular aging of our body.
– Thanks to the presence of very small quantities of morphine and papaverine they are slightly sedative and can be useful in case of problems related to anxiety and insomnia.
– The cuticle covering the poppy seeds contains a good percentage of dietary fiber. These are useful for the proper functioning of the intestine and the digestive process.
– They are rich in iron, calcium, zinc and copper which contribute to the proper functioning of the brain and mental health. These minerals improve neurotransmitter function and cognitive function.
In addition to the seeds, however, other parts of the poppy plant enter the food. For correct knowledge, some notes are reported.
In Friuli, the clump of leaves that develops around the root in early spring, when the plant is still underdeveloped and far from flowering, is consumed boiled and possibly sautéed in the pot as a vegetable known under the name of “confenòns”. The taste is delicate and slightly bitter. The young plant, which has not emitted the floral stem, can be eaten raw, especially the leaves, cut thinly and mixed with other vegetables, to make excellent salads, which if seasoned with salt, lemon juice and olive oil in the order, they are very tasty. In Veneto this dish is called “rosoina”, “pevarel”, or “batis’ciosoe”; in reality this last name refers to Silene, also called s-ciopèt. Even with this vegetable you can make salads, if raw, or excellent risotto with young leaves. Also in Salento the tender seedlings are consumed under the name of “fried paparina”, blanched and sautéed in a pan in a garlic sauce with the addition of black olives (celline) some walnut kernels and flavored with orange peel and beards fennel. In Romagna, it is known by the name of “Rosole”. They are used in the kitchen, raw, after having finely shredded them and left to macerate in salt for 24/36 hours. After squeezing them, they are used to fill the famous “Crescione” or “Cassone” (or Cascione).

Preparations –
Poppy seeds are placed in numerous culinary traditions with a more common use in baked goods. Very common in German and Nordic cuisine, they are relatively unknown on the Italian table. In Italy, in fact, the use of poppy seeds falls within the tradition of only one region, Trentino Alto Adige, where they have been used in strudel since ancient times.
In recent years, however, the use of poppy seeds has spread throughout the peninsula, especially as a decoration for the surface of bread and biscuits. In addition to the use as such, poppy seeds can be ground to produce a kind of pasta, to which other ingredients are often added, such as honey, milk, butter or lemon. Toasted and ground, poppy seeds (in the white variety) fall into the composition of the curry to which they impart a typical nutty flavor.
Among the various preparations with poppy seeds, the pairing with citrus fruits that these co-starters seeds of cakes together with oranges or lemons is really tasty.