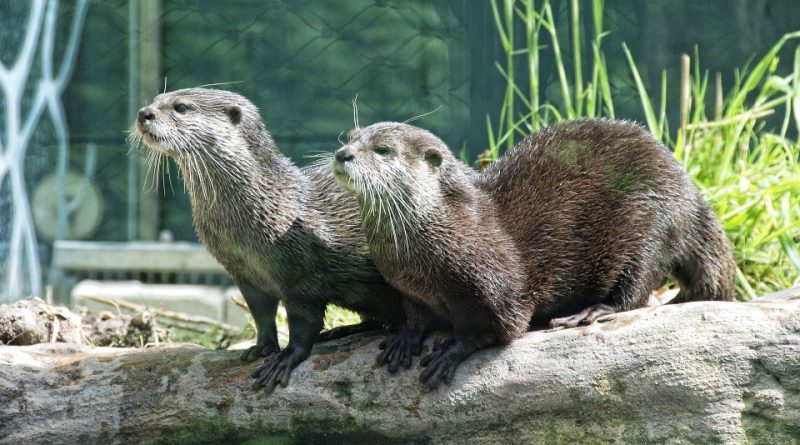 The European otter (Lutra lutra, Linnaeus 1758) is a mammal belonging to the Mustelidae family.

Systematic –
From a systematic point of view it belongs to the Eukaryota Domain, Animalia Kingdom, Phylum Chordata, Mammalia Class, Carnivorous Order, Mustelidae Family, Lutrinae Subfamily and therefore to the Genus Lutra and to the Species L. lutra.
The term is synonymous:
– Lutra nippon Imaizumi & Yoshiyuki, 1989.

Geographical Distribution and Habitat –
Otter is a medium-sized mammal widespread in the Eurasian area, in Indomalesia, Palestine, Morocco and Algeria.
On the European continent its current distribution is very fragmented and in several countries (for example the Netherlands, Liechtenstein, Switzerland) it is now extinct while in others (Italy, France, Belgium, Germany) it is present with few and isolated residual populations. It is on the rise in Sweden.
In Italy, where the species was originally widespread throughout the peninsula, it is present today mainly along the waterways of Basilicata, Campania, Calabria, Puglia (Picentino rivers, Calore lucano, Sele, Tanagro, Calore irpino, Ofanto, Alento, Mingardo, Bussento, Bradano, Basento, Cavone, Agri, Sinni, Noce, Lao and Fiumara di Atella). It is also present in Abruzzo and Molise (Sangro basin and upper Volturno basin) and in some resurgence areas of Friuli-Venezia Giulia, as well as perhaps in isolated stations of other regions (Lazio, Tuscany, Liguria, Emilia Romagna) where a time was definitely present.
Its ideal habitat is that of lowland and mountain aquatic environments, such as lakes, ponds, streams, rivers, lagoons, in European and Asian areas, up to 1500 m above sea level.

Description –
Lutra lutra is a mammal that can reach 120 cm, including the long tail and has a dark brown coat color dorsally and lighter in the ventral area.
The head-body length is 60-65 cm, tail 35-55 cm, shoulder height 30 cm, for a weight of 6-15 kg.
It has a flattened head, with very small and rounded ears, short and little distinguishable neck; the body is long with legs equipped with interdigital membranes to swim even under water.
The muzzle is stocky and covered with a sturdy mustache. The ears are very small.
The eyes are provided with a particular mechanism for accommodating the lens which allows it to see well even while diving.

Biology –
Otter has a reproductive period with two probable periods of heat: one between December and March and the other between June and July.
The gestation lasts for a period of 9-10 months. The female gives birth to 2-4 puppies that remain blind for up to 28-35 days.
The chicks become self-sufficient at 6-9 months and development completes at around 2 years.
Individuals become sexually active shortly before the age of three. The adult specimens live in isolation or in small family groups, however the females keep their offspring for a long time.
This mammal has an average lifespan ranging from 13 to 15 years.
As for the shelters where the gestation lives and completes, this animal, to build its lair, almost always takes advantage of the holes that the river waters leave on the banks; it rarely uses natural cavities between the roots of old trees or dens abandoned by badgers or foxes because they have already been inhabited previously.
Its den has an underwater entrance and at least one breather on dry land.

Ecological role –
The otter is a mammal that adapts to live only in non-anthropized areas and is very sensitive to pollution.
She is an excellent angler who has entered into competition with the human being, so that coexistence has not been easy at all in the last 2-3 centuries.
Furthermore, this animal was hunted during the twentieth century also for its fur, used for women’s clothing.
It is mainly nocturnal, hunting alone or in small groups. In water it uses the tail as a propeller the tail and as a rudder, especially in the depths of the limbs.
The otter loves to play, rolling on the muddy banks and taking stones that he throws in the water and then fishing them out.
The hunting territory of this mustelid is somewhat broad, varying between 5 and 15 km and is marked along the banks of rivers or lakes.
During the hunt it catches the prey on the surface if it is a bird or in depth if it is a fish. Unmistakable sign of its presence are the numerous fish bones left along the banks.
She is an excellent swimmer and her diet consists almost exclusively of fish. It also feeds in particular on shrimp and other invertebrates and does not disdain even water birds. On the ground prey voles, rabbits and other small mammals.
In Italy, once, the otter was widespread throughout the peninsula, but currently the population is confined in two nuclei along the waterways that stretch between Abruzzo, Molise, Campania, Basilicata, Puglia and Calabria.
Recent findings however indicate a gradual return to the Trentino and Friuli rivers from the neighboring basins of Austria and Slovenia.
The main threats to the species are the pollution of waters by polyphenolic compounds, the depletion of fish fauna (biomass), the cementing of the embankments, collisions with vehicles and illegal killings also due to the conflict with fishing and breeding fish (C. Prigioni & L. Boitani in Boitani et al. 2003, Loy et al., 2010). The recent extinctions of some isolated populations (Po delta in the 1970s, more recently the Farma-Merse nucleus) may have been caused by demographic and stochastic factors.
Lutra lutra is listed in Appendix II of the Berne Convention (1979) and in Appendix II, IV of the Habitats Directive (92/43 / EEC). Included in CITES Appendix I and indicated as Near Threatened (NT) by the IUCN Red List of Threatened Species (Temple & Terry 2007). Legally protected in Italy since 1977, however much of the territory it occupies does not enjoy any form of protection (C. Prigioni & L. Boitani in Boitani et al. 2003).
To ensure a real protection of the residual populations it is necessary to maintain and improve the quality of the environment through the conservation of riparian vegetation or its restoration, the control of the works of artificial embankment of the river stretches, the regulation of the extraction activity of aggregates from the riverbed and from the banks of the rivers, the control of industrial water pollution, the qualitative and quantitative restoration of fish stocks to maintain a satisfactory food availability for the species, the protection of the ways of dispersion of individuals between river basins (M. Spagnesi in Spagnesi & Toso 1999, Carranza et al. 2011).
In 2006 the population of otters in Italy was estimated between 220 and 660 specimens, present in different nuclei on the Alps, the Apennines and some large plains rivers. The population is considered to be numerically increasing and geographically expanding.