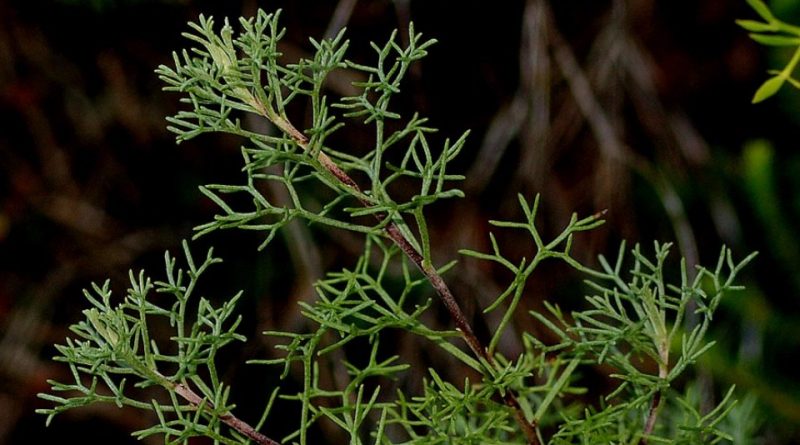 Etymology –
The term Artemisia comes from Ἄρτεμις Artemis Artemide, Greek name of the goddess Diana, a genus already mentioned in Pliny; according to some authors, Artemisia II of Caria (Αρτεμισία Artemisía? -350 BC), sister and wife of Mausolus, would have given this plant its name.
The specific epithet campestris comes from the campus flat place, field: which grows in the fields.

Geographical Distribution and Habitat –
Field wormwood is a rare plant that originates in circumboreal areas.
In Italy it is present in Campania, Friuli Venezia Giulia, Liguria, Lombardy, Piedmont, Sicily, Trentino Alto Adige, Aosta Valley and Veneto.
Its habitat is that of the fields where it grows at altitudes between 0-2500 meters above sea level. 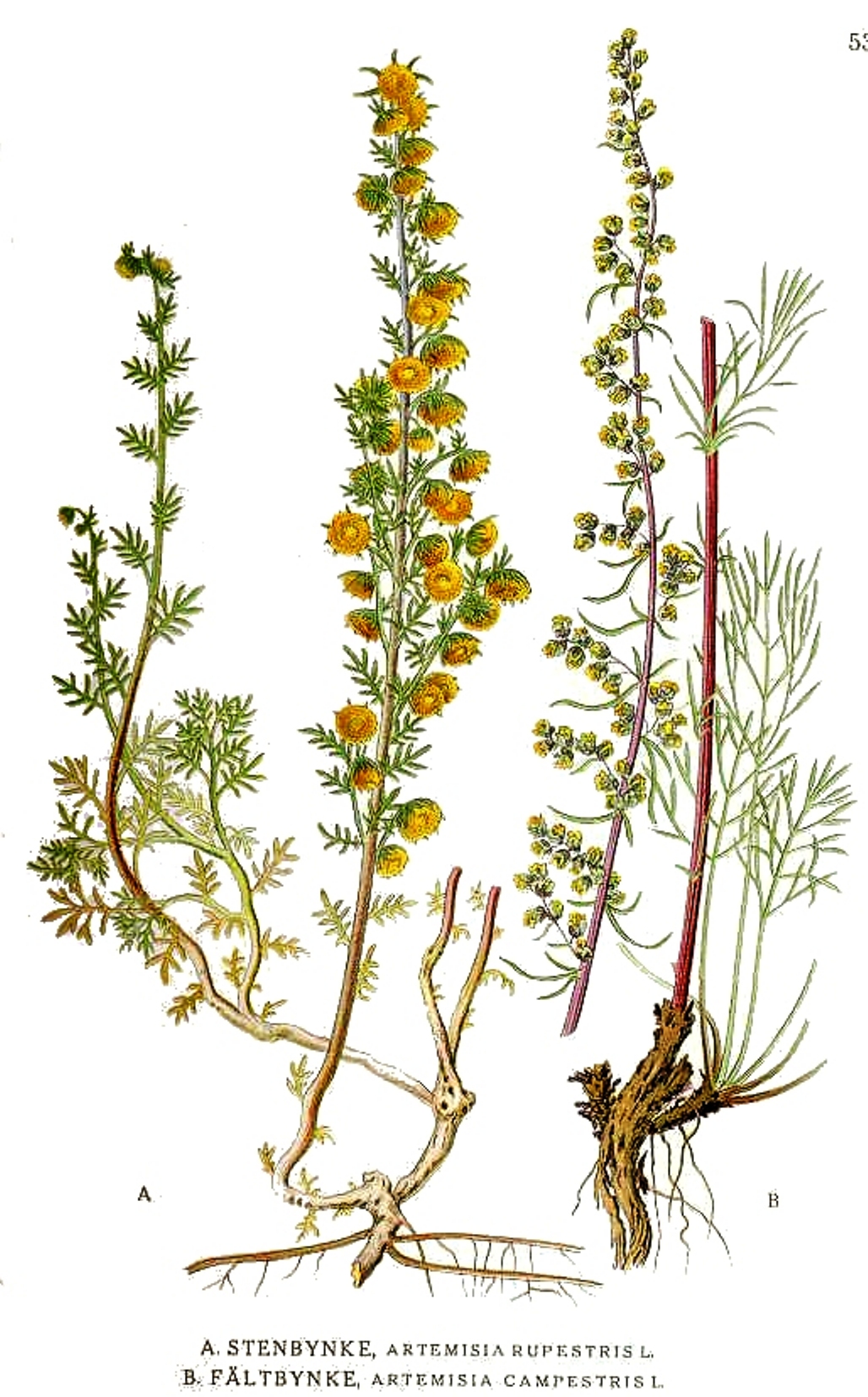 Description –
Field wormwood is a perennial plant that can reach a height between 20 and 60 cm, with a branchy and erect epigean part.
The ascending branches generally have an arched posture. For each plant the number of stems varies from 1 to 5.
The plant is woody at the base, with wintering buds placed at a height from the ground between 2 and 30 cm with a shrubby appearance.
The herbaceous portions dry out every year, leaving only the woody parts alive.
It is basically a hairless plant with a strong aromatic odor.
They are also latex-free (like the other Asteraceae), but contain sesquiterpene lactone ethereal oils.
The roots are secondary from taproot and the underground part is taproot.
The leaves, mostly basal and with petiole, are tomentose (white – pubescent) or viscous and gray-green and thin.
The lower ones have a 2 – 3 – pinnate shape (divided into several segments), while the upper ones are simpler and progressively reduced towards the inflorescence. The petiole at the base is enlarged into two orecchiette-like leaves. The segments of the lamina are thin, linear and strictly oblong lacinias with acute apex. The size of the lamina of the basal leaves is 4 – 12 cm, that of the lamina of the cauline leaves has a width of 0.5 – 1.5 cm and a length of 2 – 4 cm, that of the lacinias of the cauline leaves have a width 0.5 – 1 mm and a length of 5 – 8 mm.
The flowers are actinomorphic, tetra-cyclic and pentamers and gathered in inflorescences.
These are relatively bare and terminal and are formed by small lateral racemes (branches of 2nd – 3rd order), at the axil of short bracts, composed of small pedunculated, pyriform and pendulous flower heads. The structure of the flower heads is typical of the Asteraceae.
Each flower head can contain 20 – 50 external female flowers and 12 – 30 internal male flowers. The length of the peduncle is 1 – 2 mm and the size of the flower heads is 1.5 – 3 mm wide and 2 – 3 mm long.
The antesis is between August and October.
The fruits are oblong-lanceolate Cipsele (achenes), compressed, 0,8-1 mm long, hairless, brownish and with no pappus.

Cultivation –
Field wormwood is a rare plant that grows spontaneously in nature and that reproduces thanks to pollination mainly by means of the wind, while the dispersion of the seeds occurs by gravity.
The plant can however be grown from seed and requires light exposure preferably in partial shade in fertile soil, rich in organic substances and well drained.
The plant can also be propagated by woody cutting.
As for fertilization, we recommend the use of mature manure in early spring and watering, where the season is more arid, even from April to October.
If planted instead in pots, it is necessary to wet regularly from March to October.
For pruning it is necessary to regularly remove wilted flowers if you don’t want to produce the seeds. In particular, at the end of flowering, clean up the dry parts, leaving the basal leaves.
Remember that its flowering period is between the months of August-October.
Furthermore, the plant survives at temperatures between -10 and 40 ° C.

Uses and Traditions –
Artemisia campestris is a plant that has medicinal properties.
There are essential oils rich in terpenes and thions, sesquiterpene lactones, Flavonoids, bitter substances and hydroxycoumins.
Mugwort is considered useful to promote digestion and as an antispasmodic against menstrual pain. However, there is a lack of scientific data regarding its efficacy and safety.
In liqueurs, as for other artemisie, it is used in the preparation of bitters.
This plant due to the presence of hybrids is not easy to determine, moreover it can be confused with similar species, including:
– Artemisia vulgaris L. – Common Artemisia: the segments of the leaves are slightly wider and have a light green color; the stems are reddish. It is common throughout the Alpine region.
– Artemisia verlotiorum Lamotte – Artemisia of the Verlot brothers: it stands out for its reddish flowers and leaves with large segments and glaucous in color. It is common throughout the Alpine region.
– Artemisia nitida Bertol – Artemisia lucida: the flower heads are yellow but more loose and the segments of the leaves are linear (with parallel sides). It is located in the northeast.
– Artemisia scoparia Waldst. & Kit. – Artemisia scoparia: it is a naturalized species originating from Eastern European areas and not very common in Italy.
According to popular medicine, field absinthe has the following medicinal properties:
– abortion;
– anthelmintic (eliminates various types of worms and parasitic helminths);
– antiseptic (property of preventing or slowing down the development of microbes);
– cholagogue (facilitates biliary secretion towards the intestine);
– emmenagogue (regulates menstrual flow);
– ophthalmic (treats eye diseases);
– stomachic (facilitates digestive function);
– tonic (strengthens the body in general).

Method of Preparation –
The drug of the plant consists of both the roots and the aerial part; in particular, the tips of the dry twigs are used.
Mugwort extracts, even if of natural origin, are potentially capable of causing undesirable effects and presenting contraindications; therefore, doctor’s advice is always appropriate.
As mentioned, it should be remembered that the mugwort applications for the treatment of the aforementioned ailments are neither approved nor supported by the appropriate experimental checks, or have not passed them. For this reason, they may be lacking in therapeutic efficacy or even be harmful to health.
Therefore, before using mugwort, its extracts or derivatives and / or products that contain it, the importance of contacting your doctor is reiterated.